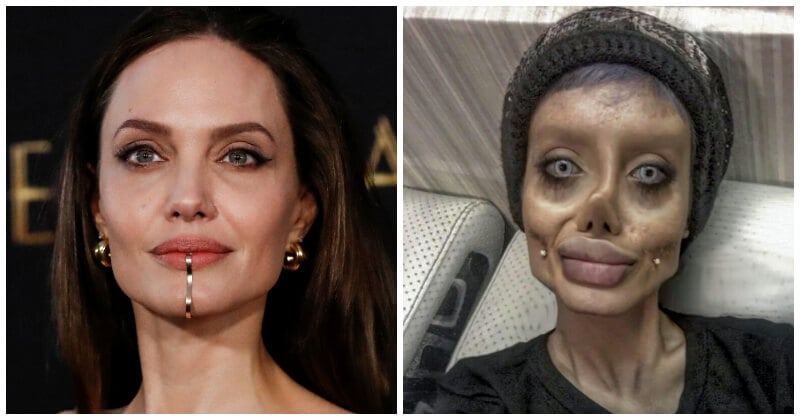 It’s exciting to admire someone who is famous. Their stories can inspire us in some ways, from our attitude toward life to the way we cope with stress, struggles, and failures. They have managed to reach the peak of their success, so their words are inspiring and persuasive.

However, there are some people who’ve tried all means to look like their favorite celebrities. They have the same hairstyle and makeup as their favs. They’ve undergone numerous cosmetic surgeries to look identical to their favorite person. This requires a lot of time and money, of course. But the point is these crazy fans must have such a strong determination.

12 people in the list below just do the same. They’ve gone under the knife numerous times to become a replica of their favorite celebrity. 24-year-old Sahar Taba, for instance, has had more than 50 surgeries to look like her favorite Hollywood actress, Angelina Jolie. Till 2017, Sahar Tabar, at 19, has undergone “50 surgeries” to look like her favorite Hollywood actress, Angelina Jolie. The Iranian teenager quickly shot to fame, being dubbed the “Zombie Angelina Jolie” by several media outlets. Many people considered her Tim Burton’s Corpse Bride.

To become a replica of Angelia Jolie, Tabar had nose and lip jobs. She even had liposuction. However, most of her appearance was hinged on makeup and editing.

In 2020, Tabar was jailed for ten years for charges including blasphemy, inciting violence, gaining income through inappropriate means, and encouraging youth to corruption. Donna Marie Trego is obviously a superfan of Lady Gaga. “She’s taken over my life. My house is full of costumes. There’s a bit of Gaga in every room,” Marie Trego explained in an interview with the Daily Mail.

It all started when the woman was asked to perform a Lady Gaga cover during a theme night at a local pub. Since then, Donna has spent over £70,000 ($87,990) for outfits, wigs, and even her own dancer team to transform into the ‘Bad Romance’ singer.

Donna’s tribute act and impersonator to Lady Gaga has received lots of appraise from fan communities. “Donna Marie as Lady Gaga is internationally acclaimed as the ‘Best Lady Gaga Tribute on the planet’!” the superfan’s website reads.

Lady Gaga herself even squealed with excitement after seeing Donna. “Oh my god, you look just like me—you are amazing.” Adam Guerra, a superfan of Madonna has splurged £150,000 (roughly $190,000) to resemble his favorite pop icon. She has undergone a total of 18 cosmetic surgeries, including cheek, bum, and jaw implants, a nose job, and fillers.

Guerra has performed Madonna’s hit songs under the drag name ‘Venus De-Lite’. He admitted he spent“practically my whole life, my whole wallet, all the money that’s been given to me” to look like his idol. “But it is so worth it because goddamn, I look like Madonna.” Rugged scruff, intriguing eyes, and chiseled jawline are what people see in Ryan Gosling. Nicholas Ryan, an aspiring actor, underwent extensive cosmetic procedures (£4,000 worth) in 2013 to look like the La La Land star.

Nicolas had Botox and filler injections to make his face resemble his favorite hero. “I’m hoping I’ll get more auditions and roles if I look more like him. That’s why I had the surgery.”

“I’m secretly excited how women will react now I look a little bit more like their celebrity crush,” he added. It all started when people remarked that there was a resemblance between him and Ricky Martin. “I got a photo of him [Martin], I realised that I liked him and, like everything in life, when I like something, I go for it,” he shared on a TV show.

Fran Mariano then spent seven years and around £6,595 ($8,254) on 30 cosmetic procedures to resemble the Puerto Rican singer. He had his nose, chin, and lips done. However, the man discovered that dit is best to “just be yourself”.

“Now, I am able to realize that the ideal thing is to be yourself, not someone else.” He said. Mega fan Jordan James Parke did everything to be a male replica of Kim Kardashian. He spent £110,000 ($137,580) on numerous procedures to turn his dream into reality. He had two nose jobs, a chin implant, 50 lip-filling operations, eyebrow tattoos, vampire facials, neck lipo-suction, microdermabrasion, a chemical peel, Botox injections in several areas, and laser hair removal.

“I don’t want to look exactly like her. I just love her features,” he told Cosmopolitan. “Well, I am a bit, but I’m not like mentally insane.” He added.

Jordan dubbed himself Britain’s “Lip King,”. He now lives a lifestyle filled with its own perks. “I get all my treatments for free now, I don’t pay for any of my Botox or my fillers,” he told Cosmopolitan. “I get companies contacting me every day asking, ‘Will you promote this on Instagram? Will you do this?’ I’m getting invited to different parties, you know what I mean, it’s just crazy. I just think to myself sometimes, imagine what Kim’s life is like. Imagine how many companies ask her to do things.” Toby Sheldon is an aspiring songwriter and the biggest fan of Justin Bieber. For 5 years, Toby has spent over £80,000 ($100,000) on numerous procedures to look like his idol, including face fillers, hair transplants, eye lifts, a controversial smile surgery and a chin.

“When Justin Bieber got famous, I was so jealous of his good looks! He had this baby face that I just really liked. Some people buy fancy cars or fancy mansions. What I do with my money is I get surgery to look more like Justin Bieber,” He said.

In 2015, Sheldon, 35 at that time, was found dead in a motel room in the San Fernando Valley. The Los Angeles County coroner listed the cause of his death as “multiple drug intoxication.” Mega fan Bryan Ray has dedicated his life be a male replica of his favorite idol, Britney Spears. The young man has spent roughly £64,000 ($80,000) on a total of 90 surgeries including veneers, regular Botox treatments, fat injections in his cheeks, laser hair removal, lip fillers, a nose job, and an intensive skin care regimen.

“Ever since I was young, there was something about Britney Spears and the qualities she had that I thought was the perfect package. I was obsessed, I watched all her interviews, learned all her choreography and then paid to have the same perfect smile as I felt that, during that time, we were very similar,” Ray told the Daily Mail. To resemble the Hunger Games actress Jennifer Lawrence, mega fan Kitty Jay, in 2014, spent over £19,000 ($25,000) on a total of six cosmetic surgeries. They include liposuction to her face and body, breast augmentation, rhinoplasty, and grafts to her cheeks and buttocks.

“The more I’ve looked at her, the more I’ve realized that her features are sort of my features but more refined,” she said. Arizona-based twins Matt and Mike Schlepp first gained recognition when appearing on MTV’s original reality series I Want A Famous Face. Their goal is to resemble Brad Pitt look-alikes. Aged 21 at the time, the siblings spent £15,000 ($19,000) on 4 plastic surgeries, including nose, cheek, jaw, and chin implants as well as 41 porcelain veneers.

“I would do it ten times over. It has definitely helped me get more girls. I’ll walk and get that double-take from girls and hear the whispering that follows,” Matt said on the show. Dubbed as ‘Scouse Pammie’, Carolyn Anderson is now the most famous lookalike of Playboy playmate and Baywatch star, Pamela Anderson. “If I do something, I want to be the best at it, so because I had always been told I looked like Pamela Anderson I decided I should be her. I already had the hair, I’ve been dyeing mine since I was 12, and I’ve naturally got full lips so I just worked on the rest.” He told Liverpool Echo. Oli London is a notorious British influencer. He has spent $150,000 on numerous cosmetic procedures over the course of six years to resemble Park Jimin from the Korean boyband, BTS. “If you look at the pictures of me and Jimin, we’re identical,” London said in the interview.

He also “identifies” himself as a Korean person with they/them pronouns and “kor/ean” neopronouns. “I have a deep respect for Korean culture. It’s cultural appreciation, not cultural appropriation.” Oli said in the 2019 interview with Barcroft TV.