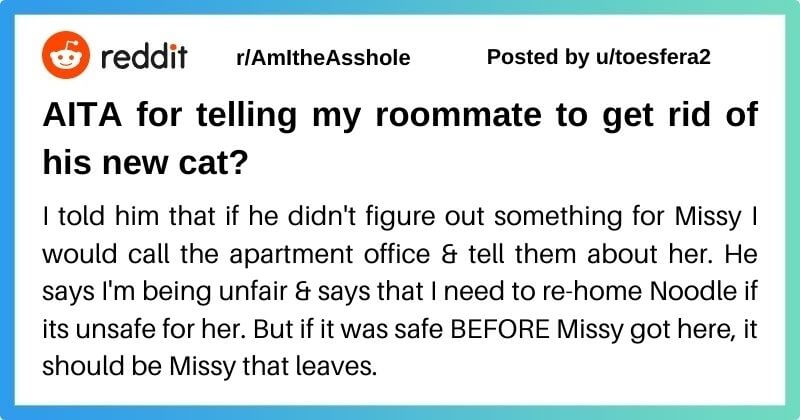 Living with other people may cause so many problems that we cannot imagine. While trivial quarrels and disagreements could be handled by ourselves, some serious conflicts need outside intervention to manage. Recently, the account u/toesfera2 turned to Reddit for advice when he had a row with his roommate, Brett, over their pets. They have been friends for ten years until now and just moved together for over a year. The rented apartment accepted one pet only, so they lived with the poster’s cat named Noodle. The cat that was feeble and half the size of a normal one has been with her owner for ten years, and the bonded pair enjoyed every moment with each other. She was an official member in the room as her owner paid for the pet deposit and rent.

The poster’s roommate used to get on well with the pair until a month ago when he brought home a stray cat called Missy. Brett’s action violated the lease that accepted only one pet. The issue kept snowballing when the two cats seemed to hate each other. They could not live in one room in harmony, and Noodle, the smaller one, nearly always got hurt after every fight.

After knowing that Missy was not chipped, Brett planned to adopt her. The poster tried to convince him that it would be impossible for many reasons. Firstly, Noodle lived in the apartment from the beginning, so Missy’s presence would be against the contract. Secondly, Missy posed a threat to poor Noodle due to her aggression. The sick cat was so scared that she did not dare to come out of her owner’s room. She kept hiding, refusing to take medicines, and even suffered from shedding.

Despite the above reasoning, Brett was impervious to the problem. He thought it was the poster’s fault for not introducing the two cats properly. Noodle’s owner got crossed with his roommate and claimed that his cat had the right to live in a pleasant environment as he had paid for the place.

After the Redditor threatened to inform the landlord of the situation, his roommate got angry and suggested he rehome the ill cat for the sake of her safety. Consequently, the poster was left at an impasse as he needed to protect his cat, while he did not want to lose his ten-year friendship.

Under the post, most commenters encouraged the Redditor to report the problem to the apartment office. They asserted that Brett was unreasonable and selfish, and taking the issue to the landlord may help open his eyes. If the roommate insisted on keeping Missy, he had to move out of the apartment. Some people even advised Noodle’s owner to find a new place or a new roommate since Brett’s personality seemed horrible.

Following the public’s advice, the poster talked to his landlord to find a possible solution. Eventually, they decided to leave Missy with Brett’s mother until they could help the two felines get along. However, though the roommate admitted his fault, the Redditor intended to alter his lease to avoid similar circumstances in the future.

What do you think about Brett? What would you respond if you were the poster? Do you have any advice or tips for introducing the two cats successfully? Do you have similar problems with your roommates? Please let us know your thought by commenting in the section below!

Need Some Cuteness In Your Life? Then Check Out These Cute Photos Of Animals