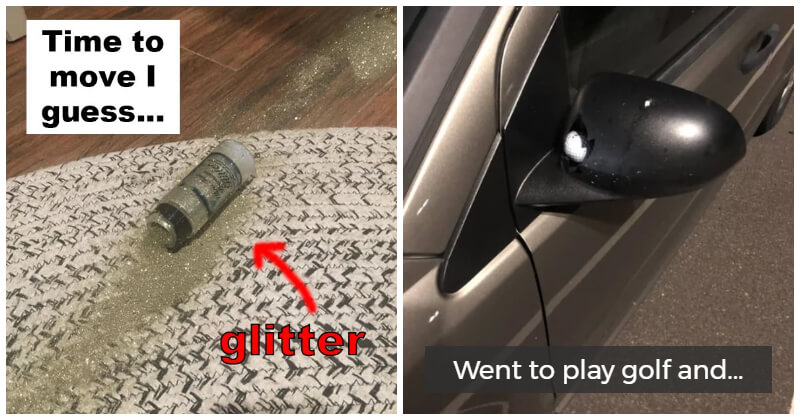 People often say about the calm before the storm. Yes, if everything is running surprisingly smoothly, it may not be the time to lower your guard. Sooner or later, it’ll be your turn to take the brunt of it at some point. So, better be prepared. Still, we can hardly change anything would such bad things happen. We are humans from flesh and bones. Our ability is limited. The only thing we can do is try to survive with minor damage.

Well, not all misfortunes hit us financially. Sometimes, bad luck comes and makes us feel so defeated. Not sure which one is worse, but the emotional damage it causes is considerable. How frustrated will you feel if you accidentally drop your toothbrush into your cat’s sandbox? Hmm, smelly. I mean, it sucks. That’s not a big deal, but it can potentially ruin your mood for the whole day. Below, people are sharing times misfortunes come quaking with the full force of emotional damage. And they poor souls can barely do anything but take a picture for us to see. So, let’s check them out! #2 Phone slipped out of my pocket while going karting and became wedged under the kart. This is what I found at the end of the lap #4 Maple syrup spilling in my fridge #5 Played at TopGolf for the first time yesterday. This is what I found when I got to my car #7 I accidentally dropped my toothbrush in the cat box #9 We were craving watermelons and as soon as the knife touched it, it burst #11 I asked a stranger to photograph my triumph. Here’s what I saw next #12 Wanted to make some sushi tonight. Roommate left me a surprise in the rice cooker… #13 There is a downside to electric mowers apparently #14 Candle was super fragrant last night… now I know why! #15 Used ramps to change oil for the first time… while backing up, the ramps slid/shot out and hit the 5qt used oil container and painted my garage a new color #16 My plate decided to explode on me #17 Late to work due to an unscheduled parade #20 Finally decided to use my bbq, only to find out its home to a squirrel now 16 Savage Insults Without Having A Single Swear Words

“Parenting Class”: These Parents Deserve An A For Effort While Getting An F For Result

People Are Sharing The Biggest Lessons Employment Has Taught Them, Here Are 25 Of The Best

Cringe Hard With These Painfully Awkward Interactions Between Bosses And Employees

Boss Tells Employee, “You’re Replaceable,” She Build Up Her Own Business And Make Them Replaceable

These 20 Jim Shoenbills Comics Will Definitely Brighten Up Your Day

Worst Newspaper And Magazine Layout Fails That Are Unexpectedly Funny