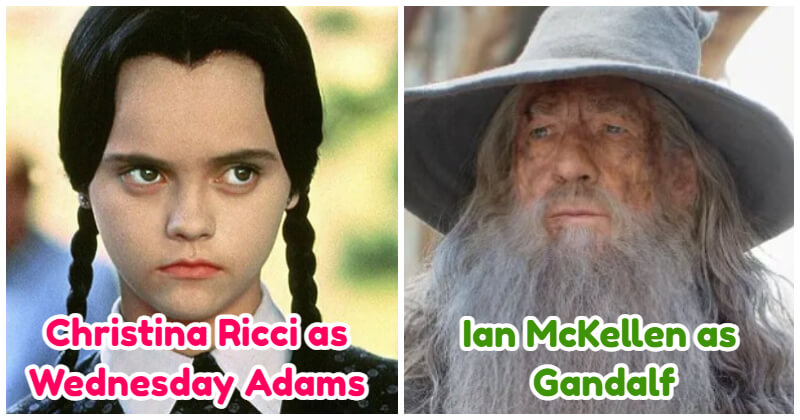 Have you ever imagined someone portraying Rose except Kate Winslet in “Titanic” (1997) or someone replacing Robert Downey Junior for the role of Tony Stark/ Iron-Man? Some actors are supposed to adapt to their respective roles and breathe life into certain characters. It seems that actors and the characters they played become inseparable. They’re often etched into our memories as the character themselves which make it difficult for us to distinguish between the actors and the character being played by them.

Do you remember Wolverine in the “X-Men” franchise? Can you think of someone who can replace Hugh Jackman to portray this character? It’s extremely hard to call out one name and this is also the main reason why the Australian star become the most beloved X-Men character in franchise history.

According to Reddit, we’ve rounded up some big names that are supposed to be born for their role. If you’re curious about it, scroll down to see them. He truly lives the ranger life that you see Aragorn living at the start of the series. His sword instructor said he picked up the skill faster than any he had trained before. That scene in the fellowship of the ring where the Uruk throws the dagger at him and he knocks it aside? The was genuine, the Uruk actor was supposed to miss but he slipped up and it flew straight at Viggo’s head and he deflected it. They left it in the movie because he just stayed in character and it was way more badass than the scripted scene. (ignislupus)

Peter Jackson admitted that sometimes he accidentally called Viggo Aragorn! He was so good at being Aragorn that people had a hard time separating him from the character. He also had a few changes/upgrades in Aragorn’s outfit according to his daily experiences. Such a dedicated actor. (hopelessbeliever)

#2 Christina Ricci as Wednesday Adams in “The Addams Family” That entire movie is perfectly cast, so the fact that she manages to stand out even with a cast that includes Christopher Lloyd, Angelica Houston, Raul Julia, etc is astonishing. (matty80) In interviews, you can see how much he loves that role. He said he loves being covered in goo/fluids and having makeup/prosthetics. (HailToTheKingslayer)

There is nothing he won’t try and do and half the weird ideas he comes up with and I often wonder how many times the cast has seen his dong. (arcaneunicorn) He’s the real star of the show. (redfiveroe)

My understanding is that Jason was a pretty serious/successful actor before Seinfeld, and that is why/how he nailed that role so well. But what do I know? (tres_chill)

#5 Ian McKellen as Gandalf in “The Lord of the Rings” Ian McKellen in everything I’ve seen him in, and probably several roles I haven’t. The man managed to bring gravitas to his role in Cats for crying out loud. (danstu)

I always wonder if Ian McKellan ever thought he would become an action movie star in his 60s. (sheiseatenwithdesire) No one will ever beat him in this role. (NessAvenue)

Tim curry in everything. He can make the shitiest role entertaining through his pure enthusiasm. (Funnysox69)

#7 Sigourney Weaver as Ellen Ripley in the “Alien” film series Especially amusing given that the role, all the roles, were empty suits. No gender, age, or ethnicity is specified. (Dyolf_Knip)

It kills me how hard Hollywood tries to create a strong female lead. Ripley is the perfect example. I don’t understand why Hollywood constantly tries to prance around a barbie doll in front of the audience and then wonders why it’s not believable that she comes off as a strong female character. Ripley was badass and the movie treated the audience like it was smart and capable and that’s why the Alien comes off as so terrifying. (ViceroyInhaler)

#8 Matthew Lillard as Shaggy in “Scooby-Doo” That was the first one I thought of! He did it so well that he was the voice actor for the cartoon for a lot of years. It was trippy for me, a child of the 90s, who first saw Matthew Lillard in things like Hackers and Scream to see him in a Scooby Doo movie, but once I got past that initial reaction he was perfect. His physicality was amazing for the character. (standbyyourmantis)

#9 Christopher Lee as Saruman in “The Lord of the Rings” I’m glad he portrayed Saruman. He has a stern presence that just works, but I don’t think he has the warmth that Ian McKellen has that made his Gandalf just perfect. (cat-fried-nad-z) I thought it was a missed opportunity in Spiderman: No Way Home that they didn’t make a joke that J Jonah Jameson was the same person even across multiverses. Like he’s so perfect that there’s not a single instance where he’s not the same guy. He’s inevitable. (SimplySarc)

9 Times Producers Chose The Wrong Actors For The Role