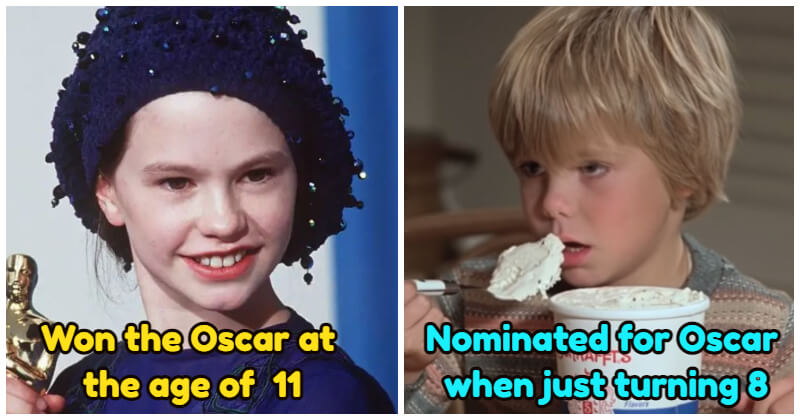 As time flies, the Oscars ceremony gains more and more attraction and eventually a huge Hollywood event. It is considered the most prestigious award show recognizing the film industry. For many people, an Oscar statue is worth 1 dollar but for actors, getting it is a dream that marks career achievement. Sometimes, they persistently work hard throughout their careers, but only get nominations in the later stages. For example, Leonardo DiCaprio, an actor with a huge profile, has been snubbed by the Oscar until much later in their career.

However, some actors are lucky enough to gain outstanding achievements at a young age. The performances from their childhood years catch international attention and then kickstart a career in the film industry by nominating or winning an Academy award.

Here is a list of actors who were nominated or won Oscar awards, starting with the youngest. At the age of 11, Anna Paquin starred as Flora McGrath in the romantic drama film “The Piano” (1993). For her performance, she won the Academy Award for Best Supporting Actress. The award made her the second youngest winner in Oscar history, behind Tatum O’Neal in the movie “Paper Moon”. Jodie Foster rose to prominence at the age of 13 in the 1976 film “Taxi Driver”. She portrayed the preteen prostitute Iris, for which she received a nomination for the Academy Award for Best Supporting Actress. Haley Joel Osment achieved fame thanks to the role of Cole, a boy with the ability to see the dead, in the film “The Sixth Sense”. For his performance, he won a Saturn and earned himself a nomination for Academy Award. Hailee Steinfeld was known for the role of Mattie, a girl seeking her father’s murderer in “True Grit”. The role helped her nominate for the Academy Award for Best Actress in a Supporting Role. At that time, she was just 14. Abigail Breslin was nominated for the Academy Award for Best Actress in a Supporting Role at the age of 10. She took on the role of Olive, a beauty pageant hopeful in the movie “Little Miss Sunshine” (2006). Saoirse Ronan had her breakthrough role as a naive pre-War English Briony Tallis in the movie “Atonement”. The talented actress was nominated for the Academy Award for Best Actress in a Supporting Role for it. Keisha Castle-Hughes received international recognition for the role of Paikea “Pai” Apirana in the film “Whale Rider”. For her performance, she got a nomination for the Academy Award for Best Actress in a Supporting Role.

#8 Quvenzhané Wallis in “Beasts of the Southern Wild” In 2012, Quvenzhané Wallis portrayed Hushpuppy in the drama film “Beasts of the Southern Wild”, for which she got nominated for the Academy Award for Best Actress. She became the youngest actress ever to be nominated in the category when just turning 9.

#9 Quinn Cummings in “The Goodbye Girl” 10-year-old Quinn Cummings starred as Lucy McFadden in the movie “The Goodbye Girl”. The role helped her come to prominence and receive the Academy Award for Best Actress in a Supporting Role. Hayley Mills perfectly fulfilled his role as a child of divorce in the 1979 film “Kramer vs. Kramer”. At age of 8, he was nominated for the Academy Award for Best Actor in a Supporting Role.