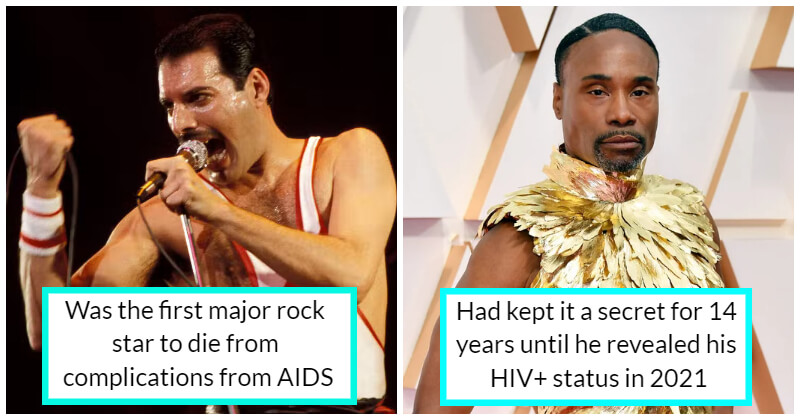 It’s quite sad but true that many public figures, rappers, actors, athletes, and other stars tested positive for HIV. Some have died from complications from AIDS while some keep moving forward, gaining recognition in their career.

It’s estimated that 38.4 million [33.9–43.8 million] people were living with HIV in the world at the end of 2021. It’s hard to say whether it’s wrong to suffer from the disease. But normal people with HIV seem to be more easily accepted and forgiven than celebrities. That is why some former celebrities denied their HIV+ status for most of their life.

Celebrities with HIV? Queen frontman Freddy Mercury might top the list. There were rumors about his HIV but he only confirmed it that had developed into AIDS, two days before his death in 1991. Other musicians who have suffered from HIV include basketball legend Magic Johnson, rapper Eazy-E, and Creedence Clearwater Revival guitarist Tom Fogerty. Billy Porter had kept it a secret for 14 years until he revealed his HIV+ status during an interview with The Hollywood Reporter on May 19, 2021.

“I was able to say everything that I wanted to say through a surrogate,” he said. Jonathan Van Ness was introduced to methamphetamine when moving to Los Angeles to pursue a career as a hairstylist. He then went to rehab twice and also relapsed twice. One day, he fainted while working in a salon, so he went to Planned Parenthood the next day and got an HIV-positive result. Gareth Thomas had secretly been living with HIV for years before he revealed it to the Sunday Mirror. He said that he spoke out because he wanted to help others and make a difference. Although Freddie Mercury had been long-rumored to suffer from the disease, he only confirmed it just a few days before his death. The Queen frontman was the first major rock star to die from complications from AIDS. Anthony Perkins kept his HIV+ status a huge secret. The Psycho star died from complications with AIDS-related pneumonia in 1992. Magic Johnson publicly revealed he was positive for HIV in 1991. The NBA superstar resort to taking a variety of medications daily to prevent his HIV from becoming full-blown AIDS. Rock Hudson revealed he suffered from AIDS in 1985, just three months before his death. Denholm Elliot tested positive for HIV in 1987. The Trading Places actor died from complications with AIDS-related tuberculosis in 1992. Pianist Liberace never came out as gay throughout his lifetime. He died from complications with AIDS in 1987 The Green Mile actor Michael Jeter tested positive for HIV. He died at age 50 but doctors didn’t think the disease also played into his death. Robert Reed died due to colon cancer in 1992, but doctors believe that HIV was also a factor in his death. The actor was best known for his role as Mike Brady on the The Brady Bunch. On November 17, 2015, Charlie Sheen announced he was inffected with HIV on the Today show. The rumor of his HIV+ status has been long-emerged after much public speculation about his personal life.

The Two and a Half Men star admitted having been addicted to drugs for many years, as well as had high-risk sex with many celebrity and non-celebrity women. “Dallas” actor Dack Rambo died from complications with AIDS when he was 52. In 1988, gold medal winner Greg Louganis publicly announced he was infected with HIV. Broadway composer Jerry Herman was infected with HIV in 1995. Styx bassist Chuck Panozzo spoke out about being gay and HIV positive in 2001. Frankie Goes to Hollywood singer Holly Johnson announced he has been living with his HIV diagnosis since 1993.