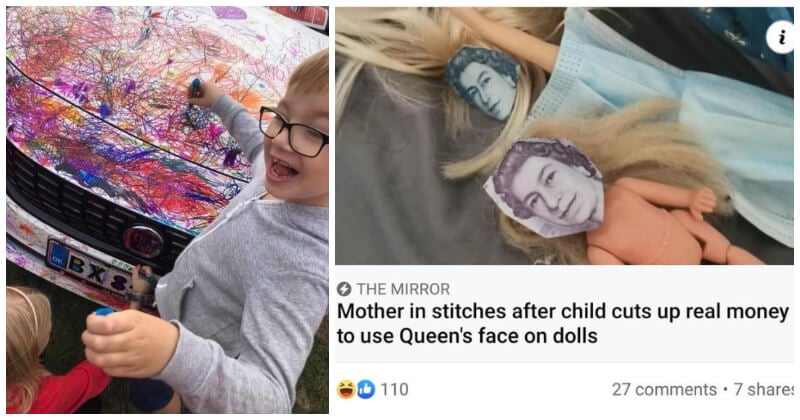 Kids are fascinating creatures. They are occasionally smart, usually weird, and, most of the time, silly. Yes, every once in a while, parents are amazed to witness their little one make a playful, witty remark out of the blue. Still, more often, we are entertained by children’s unexpected and strange reactions. Their minds must work differently from ours, right? And the last one, children are wild. Like, they don’t have so much inside their heads, so it’s reasonable to see them act uncontrollably and quite silly most of the time.

We all used to be kids. We’ve all done embarrassing things that we would regret later in life. That’s a part of our childhood. And well, it’s nearly impossible to get angry because those little pranksters play so innocently. Instead, people take pictures of the times their children mess up so that they’ll have proof for later. Below are some images of children being children, in the truest way. Let’s scroll down to check them out! #3 This image is so painful #4 The little guy was sick of his sh*t #10 YT shorts in a nutshell #13 Mom wasn’t happy about this one #14 Nobody’s going to know. How will they know? #16 This is one of my parents’ favorite stories #17 Not my proudest moment. All I wanted was a toy train

#18 This ominous birthday card (it wasn’t her birthday) #19 Those poor people in the boats #20 But I stopped the fight People Share Their Text Exchange With Insanely Shameless Ones

People Are Sharing Their Most “Boomer” Opinions, But They Just Make Sense

“This Doesn’t Add Up”: Woman Shuts Down Haters Who Don’t Understand How She Can Have A “Handsome” And “Physically Fit” Husband

These Are Officially The 20 Unluckiest People This Week

Boss Tells Employee, “You’re Replaceable,” She Build Up Her Own Business And Make Them Replaceable

“Today I Messed Up By Owning A Golden Retriever While Being Black”: Delusional Delivery Woman Decided To Be Hero By Calling Cops On Customer