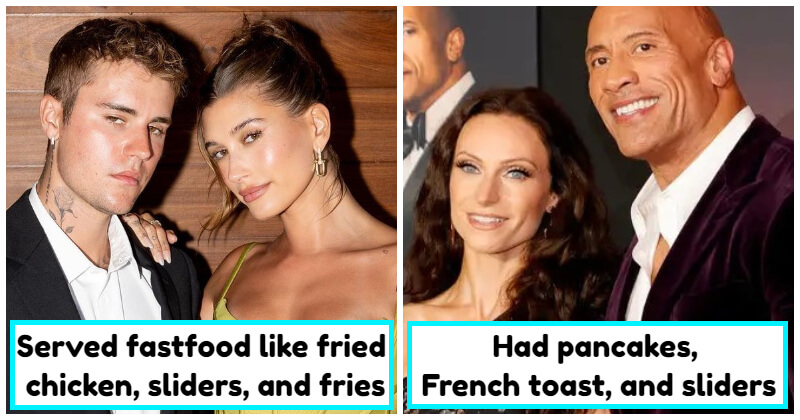 Celebrity weddings happen every year that attract large interest from social media users and a load of fans. Many celebrities tend to share their happy moment with their family and friends. In the midst of the romance, the couples along with wedding planners take on the monstrous task of getting everything as close to perfect as possible. One of the most important parts of the wedding that many guests care about is the menu.

There are endless food selections for weddings. Sometimes the selection makes it find the right option. Most stars go out with their menu with fancy meals such as seared tuna with wasabi seaweed salad, goat cheese, lamb meatballs, lobsters with mashed potatoes, shrimp cocktail shooters, or watermelon cubes with burrata. These dishes certainly make others’ mouths water. However, some celebs choose unusual dishes to serve for their happy day. Their menu includes street food, regular garden salad, or even fast food like pizza and burgers.

If you’re curious about the dishes that are served at some celebrity weddings, scroll down to see them. The wedding of Travis Barker and Kourtney Kardashian was held at Castello Brown in Portofino, Italy. At the wedding, the guests were treated to various food options. Jenner shared a video on Instagram Story that captured some dishes, including cannoli and pasta. However, the portion sizes of the pasta made many people on social media surprise. Dwayne “The Rock” Johnson surprised many people when announcing his marriage to Lauren Hashian in a secret ceremony in Hawaii on August 18, 2019. At the ceremony, their guests had a breakfast menu including pancakes, French toast, and sliders. Unlike other couples, Jay-Z and Beyoncéa chose to provide their own homemade wedding food rather than hiring caterers. While Jay-Z’s grandmother cooked oxtails, Beyoncé’s mother cooked Creole food. Ellen DeGeneres and Portia de Rossi held their wedding. All guests were treated to numerous delicious dishes, all of which were 100% vegan. There was nothing served that contained dairy, meat, or any type of animal product. The wedding cake of Justin Theroux and Jennifer Aniston was inspired by Muppet to honor Jennifer’s love for it. The cake was vanilla and strawberry that made by Duff Goldman of Charm City Cakes. According to the sources, the dishes served at the wedding of Priyanka Chopra and Nick Jonas included her favorite food. The menu is a mix of Indian, European and American comfort food. The wedding of Brooklyn Beckham and Nicola Peltz included halibut, filet mignon, and vegan osso buco. However, the surprise at the afterparty where they had Wendy’s food truck. The food at Paris Hilton and Carter Reum’s wedding looked absolutely delicious. For appetizers, the couple served smoked salmon pizza, duck pot stickers, and spicy tuna tartare. Additionally, the guests enjoyed plates of oysters and seared scallops, and so on. The lovely couple served steak and mahi-mahi at their wedding where they heled the event ar the Unico Riviera Maya Hotel in Mexico. Miley Cyrus and Liam Hemsworth held their wedding on December 23, 2018, at their home in Nashville. Their menu had all vegan food like fried “chicken”, vegan chicken and dumplings, and so on. Justin and Hailey Bieber held a formal celebration in South Carolina. Their menu was an afterparty one with fast-food options like fried chicken, sliders, and fries.