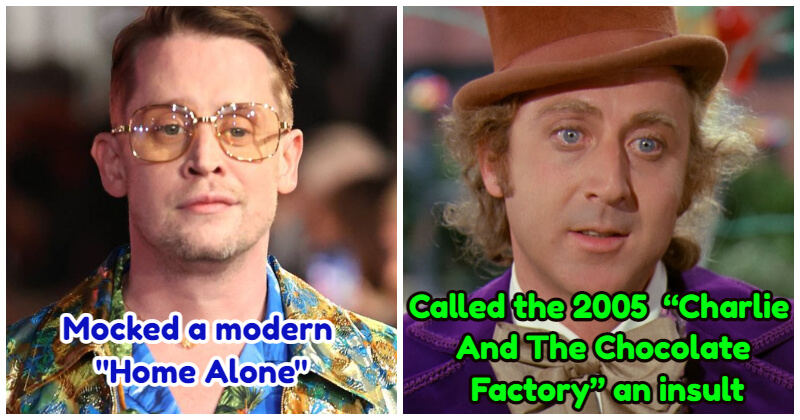 In Hollywood, remakes are certainly nothing new. When a movie is incredibly successful, directors or filmmakers want to enjoy its success by emulating the same goodness years later. Filmmakers tend to follow a simple procedure: taking a popular movie, picking a potential cast, and carefully re-shooting important scenes. These remakes certainly have millions of viewers’ curiosity, especially fans of the original movie. Every movie remake is inevitably compared to the movie that came before it. Sadly, some movie remakes are really bad.

For example, classic rom-com “Overboard”, superhero movie “Fantastic Four” or horror flick “Jacob’s Ladder” were all perfect movies until someone decided to remake them. These movies were remade into such boring or bland ones that made many people wish to unseen them. Not only viewers but also actors of the original movie expressed their attitude about the remakes.

Here are 10 instances in Hollywood when actors called out the remakes of their own movies. Robert Englund is known for portraying the iconic Freddy Krueger in “A Nightmare On Elm Street”. In 2010, the movie was remade and the character was played by Jackie Earle Haley. When it was released, Robert Englund showed his attitude. He said the movie was a little cold and the change to a more “realist burn make-up with melted features took a lot of the strength away from the character.

#2 When Jerry Lewis wasn’t pleased with Eddie Murphy’s performance in the 1996 remake of his 1963 film, “The Nutty Professor” In an interview with Entertainment Weekly, Jerry Lewis shared his thought about the remake of “The Nutty Professor”. He said, “When he had to do fart jokes, he lost me. As a matter of fact, I told his editor, if he wants any more from me on a creative level, tell him to pull the whole sequence.” When Disney announced a remake of “Home Alone”, Macaulay Culkin, the star of the original movie, expressed his attitude on Twitter through a picture of himself. It seemed he wasn’t pleased with the version. In an interview with Turner Classic Movies, Gene Wilder who played Willy Wonka said that the remake seemed to be an insult although Jonny Deep was a great actor. After the announcement to reboot the movie “Ghostbusters”, Leslie Jones who starred as Patty Tolan, expressed her anger and frustration. All the original cast of the 2016 “Ghostbuster” was made. Michael Caine wasn’t happy with Jude Law’s portrayal of the character. The actor felt that Jude in the 2004 remake was sinister instead of funny. Director Abel Ferrara of the 1992 “Bad Lieutenant” said, “I hate these people – they suck. It’s lame. I can’t believe Nic Cage is trying to play that part”. The original version was made on blood and guts so he hoped it didn’t upset him. Tomas Alfredson wasn’t pleased with the other version of “Let The Right One In”, which was renamed “Let Me In”. he said, “Remakes should be made of movies that aren’t very good, that gives you the chance to fix whatever has gone wrong”. Sir Alan Parker, director of the 1980 musical drama “Fame”, felt so sad when nobody approached him regarding the 2009 remake of the film. He said “Fame” was his and he spent over a year making the movie. When it came to experience watching the remake, he said he felt “mugged”.