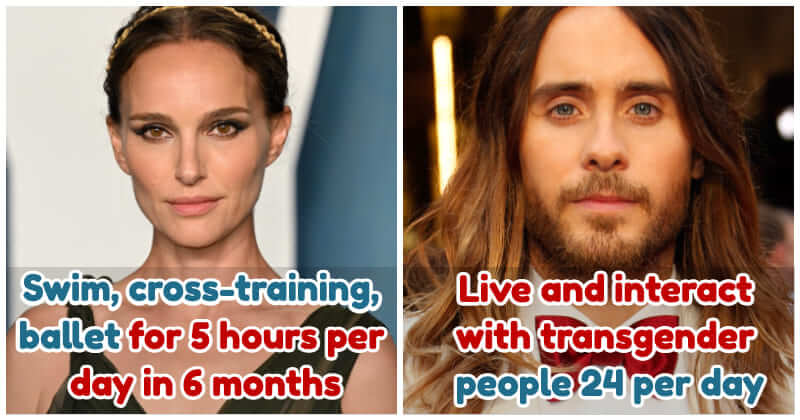 One technique actors and actresses use to get into character is method acting. This strategy is regarded as one of the most effective in Hollywood industries. However, a significant amount of planning is required behind the scenes. Actors and actresses must undergo significant physical changes to play different parts.

They will adopt the same mannerisms and body language, and some will even go so far as to drop a significant amount of weight to fully immerse themselves in the role. Lee Strasberg asserts that “method acting is what all actors have always done whenever they acted well,” and he says this is true. Below is the list of the seven superintense methods from actors to get the roles. Michelle Williams did the research for My Week with Marilyn. She read books about her, the literature the icon liked to read, method acting books, and carried recordings of her voice on her iPod. She saw many Monroe films.

She began with The Prince and the Showgirl. “I continued watching the movie while my daughter was at school, absorbing as much as I could, pausing it, trying to emulate what I had seen, making many mistakes, clueless, and then, one day, everything started to come together.” Williams continued. She wore tight dresses, push-up bras, and high heels to replicate Monroe’s slinky gait. She bound her knees. Natalie Portman wasn’t a method in Black Swan. But she did. Before filming, she trained five hours a day for six months with ballet, cross-training, and swimming. As in the picture, she seldom ate and lost 20 pounds. I hardly ate and worked 16 hours a day. I almost method-acted accidentally. “I wonder how people do this with families,” she told the Daily Mail.

It was harder than anything I’d ever done. I usually go home and be myself, but not this time. I couldn’t escape it. Portman played a competitive ballerina well. For her performance, she won a Golden Globe and an Oscar. Christian Bale embodied Trevor Reznik in The Machinist. Living on coffee and apples, he lost 63 pounds. He weighed 121 pounds after filming. Bale hadn’t worked recently, he said. “I hadn’t discovered exciting scripts. I needed something desperately. Then I couldn’t put this one down. After finishing it, he wanted to reread it to see if he missed any clues. “There are several, but they’re extremely subtle. This one seems to have a fantastic character and a potentially great movie. Hilary Swank takes Boys Don’t Cry seriously. The actress dressed and lived as a man for a month to prepare. She bandaged her breasts and wore socks down her jeans. She decreased her body fat to 7% to highlight her facial structure and refused to be seen out of costume. When she entered and left her flat, her neighbors mistook her for a male relative.

She spent five weeks trying to pass as a boy before filming. “Seeing what worked and what didn’t and shedding body fat to thin my face. My neighbors thought I was Billy from Iowa. In The Last King of Scotland, Forest Whitaker played Ugandan dictator Idi Amin. He grew 50 pounds and learned Swahili and Amin’s dialect. He studied about him, watched news footage and documentaries, and spoke with his friends, relatives, generals, and victims in Uganda.

“I went there to experience being Ugandan… I sat with Idi Amin’s brother under a mango tree while he told me about how Idi used to organize soccer or rugby games. Whitaker said he was obsessed with Idi Amin’s character 24 hours a day, even in his dreams. “I couldn’t let go of the surface until the movie was done, so I took a shower to wash him off. I was alone, so I yelled to get his voice out of me and regain mine. Jared Leto used technique to portray a drug-addicted transwoman in Dallas Buyers Club. He lost 30 pounds, shaved his eyebrows, waxed his body, and worked in drag. He stayed in character 24 hours a day and interacted with transgender people to improve his performance.

Co-star Matthew McConaughey praised Leto. “Jared’s insistence on staying in character may have turned off others. It would have been easy for an actor to caricature Rayon, but Jared maintained her idiosyncrasies realistic. Jared’s ‘human’ approach made him easier to work with and more truthful, claimed the director. Leto won the Oscar, Golden Globe, and SAG Award for Best Supporting Actor. In The Theory of Everything, Eddie Redmayne researched Stephen Hawking’s life. He spent six months studying the physicist’s interviews. A movement instructor helped him capture Hawking’s body. Redmayne examined medical materials and talked to Hawking’s nurses to understand his condition. I spent four months preparing. Extreme. I treated him in London. I met ill people. I studied details.

It was a privilege but terrifying. Nervous. He worked with a coach to train previously unused muscles. Work is paying off. Redmayne won the Golden Globe, SAG, Oscar, and BAFTA for Best Actor.