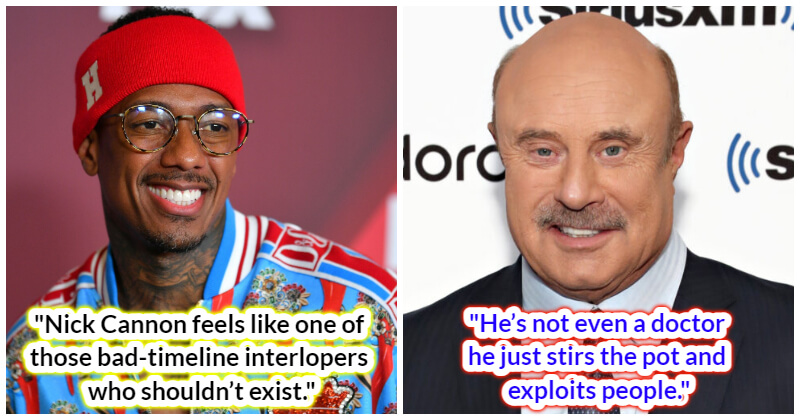 There are many reasons for loving or hating famous people. You may love them because they are stunning, and your heart beats fast when seeing them. But you may also hate them just because a feature of their face doesn’t satisfy your eyes or one or two times they lost themselves in public. Celebrities are also humans, guys. They also have both good and bad sides like us. However, fame comes with glitter and perfection. Some people find it hard to accept and forgive a celebrity’s imperfection.

Is there any celebrity that gives you bad vibes all the time you see or hear her/ his voice? Reddit user u/NoGeologist7907 raised this question on r/AskReddit and it received thousands of comments. Why? People don’t hold it back, so a lot of both expected and unexpected names come out. Sia, Christina Aguilera, Wendy Williams or Mark Zuckerberg is listed. Do you share the same opinion? Are you curious about which famous names are tagged? Scroll down and check them out! This isn’t a vibe; it is real. I met her at a meet and greet when I was 10 years old because of my Make-A-Wish wish (Backstreet Boys weren’t available). I was a sick kid, looked very physically sick, and she took one look at me up and down, made an “ew” face, but quickly faked a smile for the camera. She’s a grade A asshole.

I should’ve just went to Disneyland like most kids chose for their wish. – Green_Ad_3074 The weird control she has over the young dancer from her music videos. Apparently she won’t let her (the dancer) have any other gigs. – PhotonInABox After seeing a clip of her mocking Terry Crews for coming our publicly about being sexually assaulted, I can’t believe she still gets views. Her audience is a bunch of braindead fuckheads to CLAP at her horrible statements.  – AnAwkwardStag I’m not a conspiracy theorist, but if someone told me he was a lizard man in a skin suit I would just accept it as fact. Or a sentient lampshade. Guy is creepy as hell, and just about the epitome of psychopath. Managed to make a shitty website about rating girls appearances on his college campus into one of the most powerful mega corporations on earth. What the fuck. – tsavong117 G-Eazy, super creepy dude. Kept hitting on my photographer even after she declined him multiple times and said she had a kid and a man. After he left someone from his team gave her a hotel room key which she threw away.

Big Sean, overall ass hole. Spit at me because I was filming his “wrong side.” Should have walked off that job but didn’t.

Really the only two celebrities I’ve encountered that weren’t professional, and/or kind. – hunteqthemighty Never heard of him but just googled him and looked at some images. Goddamn, went from skinny little dude to being on a CPAP while awake?(which doesn’t make a lot of sense to me) One video called “my new diet as a disabled person”. – nahfoo Steven Seagal… because everything he has said and done so far is creepy as fuck… and I’m sure it’s just the tip of the lardberg. – MooseMalloy Jeff Bezos and his creepy ass laugh. He always sounds like he’s laughing in mockery at the rest of the world. – SaintHuck Nick Cannon feels like one of those bad-timeline interlopers who shouldn’t exist. In the good timeline, Kel Mitchell gets all the projects that Nick Cannon stole and helps protect the sincere weirdness of 90s Nickelodeon from dying in the deluge of cynicism wrought by the ‘oughts.

Thank you for attending my dissertation defense. –  chimchoyman Yeah, Scientology does weird things to people. Any of those celebrities who have been neck deep in it have this glossy-eyed, uncanny-valley aura about them that something isn’t right. It’s very offputting. – SkipRoberts Couldn’t stand him when he was MySpace famous, and I can’t stand him now. I was so upset when he became a YouTube “beauty guru.” He’s been notoriously narcissistic, racist, and just plain awful. – wheres_mayramaines Christian Bale said he based his performance as Patrick Bateman in American Psycho on the impression he got of Tom Cruise after meeting him. Really makes you think about what Tom Cruise must be like. – tkcool73 I definitely wouldn’t leave him alone with anyone under 20. Dude is the wrong kind of weird publicly to be okay privately. – PMJackolanternNudes Something about her starring in a cult show while still being a cult member and defending it doesn’t sit right with me. – ViajeraFrustrada I mean she also runs like a pseudoscience cult that’s been scamming WASP moms on bull shit remedies for years now. Watch the Vice Episode on GOOP. –  MR_DEMOTIVATOR The most disappointing one I’ve learned of recently is Nancy Cartwright. Bart Simpson and many other characters. She donated 10 million bucks to the Church in 2007. – DocsMildlyDislikeMe James Charles. I cant stand the way he talks. Its like hes shouting every word. – elli3snailie He is definitely a weird guy. – GOLDENninjaXbox Rolf Harris long before the pedophile stuff came out always gave me a bad vibe. Even as a kid I just didn’t like him, something always felt off. –  Ask/ Reddit That fake-ass smile, the way he moves, never mind what he’s trying to sell. He’s a fucking backstabbing predator.

Every time I see that man’s face I have the overwhelming urge to punch it with a brick. – xJD88x It’s come out several times that Drake is a pedo but no one seems to care enough, that really bothers me. – Iamaswine The Behind the Bastards episodes on him are intense.

Basically of Oprah’s doctors: John of God raped the most people, Dr. Oz has advertised his followers into the most indirect deaths, and Dr. Phil has tortured the most kids. – oogmar It was such a disappointment to me the more I found out about the way he acts on set and treats other people. When he comes up in conversation among people who have worked with him (on podcasts, commentary, etc.), there’s clearly a lot of stuff that goes unsaid, they’re always picking their words so carefully. Everyone was too uncomfortable/polite/concerned about how it would affect their career to be honest about how unpleasant and abusive he is until recently and I think that’s what gave a lot of folks a creepy vibe for so long – there was something not being talked about.

I have to remind myself that “his” projects were a collaborative effort and I can still enjoy them as something that a lot of people worked very hard on rather than as the “artistic vision” of a selfish, mean man with a god complex. – chittybangarang8