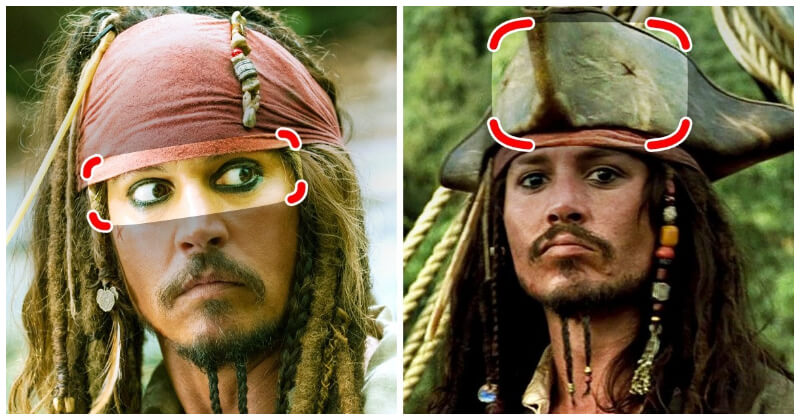 Johnny Depp is globally known as a multifaced actor who has successfully portrayed quite eccentric roles that many Hollywood stars would not, including Willy Wonka, Jack Sparrow, and many others. His career has spanned over 3 decades and the actor has also achieved multiple accolades, such as a Golden Globe Award and a Screen Actor’s Award, in addition to three nominations for Academy Award for Best Actor.

Depp has played a lot of iconic roles that make him become one of the most recognized actors in the world. Certainly, some diehard fans remember all these roles or even every detail in all of his movies. Still, they have been doing deep dives into his classic films looking for hidden details that not everybody noticed. From Captain Jack Sparrow to Sweeney Todd, there are a bunch of interesting facts that people might have missed.

And here are 12 hidden details in Johnny Depp’s movies that will help you know more about his characters. Let’s scroll down and enjoy!

#1 He came up with Captain Barbossa’s name. Source: © Pirates of the Caribbean: At World’s End / Walt Disney Pictures and co-producers

The Pirates of the Caribbean: At World’s End is the first movie in the franchise to mention Captain Barbossa’s first name, Hector, although the screenwriter seemed not to name the character that way. In the annotated version of Pirates of the Caribbean: The Curse of the Black Pearl, Depp made a joke that Barbossa’s first name was Hector and it was misinterpreted by audiences, believing it as fact. So the writer with no choice took that name in the rest of the movies.

#2 He signed on for Fantastic Beasts: The Crimes of Grindelwald without reading the script. Johnny Depp is a big fan of Potterworld, so he decided to take part in this movie, and signed his contract without even reading the script.

#3 Johnny Depp improvised a song and surprised everybody. In the movie Pirates of the Caribbean: Dead Man’s Chest (2006), the little song “I got a jar of dirt” sung by captain Jack Sparrow was actually improvised by Johnny Depp. Looking at his face, he was so proud!

#4 A tribute to teeth Source: © Mortdecai / MWM Studios and co-producers, © Where Were You When the Lights Went Out? / Metro-Goldwyn-Mayer (MGM)

Paul Bettany, who portrayed Jock Strapp, the assistant, and bodyguard of the art dealer in Mortdecai, was interviewed momentarily after the film was premiered. He told that Depp’s teeth in the film are a tribute to British actor Terry-Thomas, who had a big gap between his two front teeth, causing his smile very peculiar.

#5 He has been dressed by the same designer for more than 30 years. His costume designer Colleen Atwood has worked with Depp for over 30 years. She’s done a great job in films such as Fantastic Beasts: The Crimes of Grindelwald, Sweeney Todd: The Demon Barber of Fleet Street, and Sleepy Hollow.

#6 He wanted to add prominence to one of his characters. Before Alice in Wonderland started to film, director Tim Burton and Johnny Depp, who would portray the Mad Hatter, wanted to meet to see how to give more depth and presence to this character in the film storyline compared to prior versions. They even went so far as to exchange sketches and themes that can be solved to achieve this.

#7 He adopted one of the horses appearing in a movie. When Johnny Depp heard Goldeneye, the one-eyed horse who portrayed Gunpowder, Ichabod Crane’s steed in Sleepy Hollow, was going to be put down, he didn’t hesitate to adopt him. In the 2016 action comedy Yoga Hosers, Johnny Depp’s character, Guy Lapointe, has some moles on his face, which we can find out shifting to different areas of his face in each scene. During the shooting of Pirates of the Caribbean: The Curse of the Black Pearl, Depp preferred to avoid having to squint constantly due to the intense sunlight of some locations, so he chose to wear contact lenses, which served as sunglasses.

#10 A special connection with John Dillinger Johnny Depp has a special connection with John Dillinger, his character in Public Enemies, whom he saw as a simple, charismatic, and tough man. This is due to both having some common in their personalities. For instance, Depp’s stepfather was incarcerated in the same prison from which Dillinger helped his men escape; also, in real life, Dillinger lived in southern Indiana, about 70 miles from where the actor was born and raised.

#11 Jack Sparrow’s hats were made of rubber. Source: © Pirates of the Caribbean: The Curse of the Black Pearl / Walt Disney Pictures and co-producers

In POTC: The Curse of the Black Pearl in 2003, most of Sparrow’s hats were made of rubber, instead of leather, so they could float on the water and be easier to retrieve.

#12 The challenge of speaking a different language Todd McDaniels, a linguist at Comanche Nation College, praised  Depp’s attempts to speak Comanche in The Lone Ranger, where Depp portrayed the protagonist, Toro, who speak the language that has only 23 to 30 living native speakers. According to McDaniels, the actor knew the correct words, although his pronunciation “was shaky but adequate.”