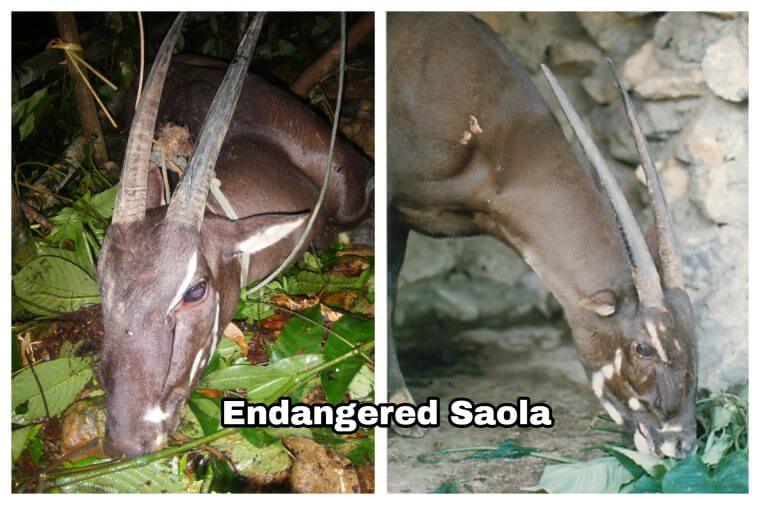 Saola is recognized by two parallel horns with sharp ends, which can reach 20 inches in length.

They are supposed to live happily in the green forests. But today, Saola is listed as an endangered species. This article is 5 facts about Saola Animal and what are the reasons behind this? Saola Animal is one of the world’s rarest large mammals, a forest-dwelling bovine native to the Annamite Range in Vietnam and Laos. In 1993, the Vietnamese Ministry of Forestry and the World Wide Fund for Nature conducted a collaborative survey after discovering remnants in V Quang National Park.(Wiki). In 1993, the first image of a living Saola was captured in captivity. The most current one was captured in 2013 by a camera that was activated by movement in a forest in central Vietnam. Saola reside in mountain forests during the wet seasons and move down to the lowlands in winter. Nowadays, they are found only in the Annamite Mountains of Vietnam and Laos.

#3. Why is the Saola endangered? The majority of Southeast Asian wildlife species that are endangered are put in danger by targeted hunting for the wildlife trade, whether it is for bushmeat or traditional Asian medicine.  Locals set some snares for subsistence use and crop protection, but recent increases in lowland people hunting to supply the illegal trade in wildlife has led to a massive increase in hunting pressure. In the north of their range, saola are hunted for the horns which have become prized trophies. The main threats to the saola are hunting and fragmentation of its range through habitat loss. Snares set in the forest for wild boar, sambar or barking deer, also trap saola. Moreover, In the Annamites, rapid and extensive infrastructure development is underway as the government attemtps to reduce the high levels of rural poverty.

#4. What is Saola scientific name? Saolas are herbivores, meaning they eat only plants. As you observe the Saola from a distance, you determine that the saola enjoys trees, grass, nuts, and berries, which are readily available to them in their habitat.

For more information about animals and news, visit our site https://aubtu.biz/ daily.