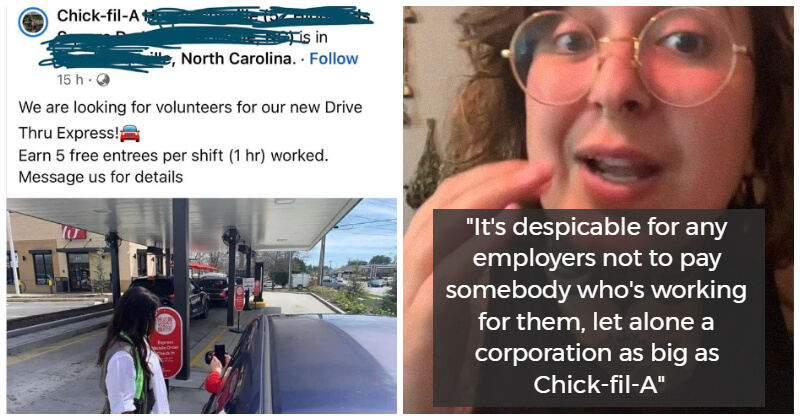 Thought that it’s already ridiculous enough for a private business to recruit volunteers, but it gets even more ridiculous when they say that they’ll “pay” volunteers with food. Well, it’s true. That’s what a branch of the Chick-fil-A fast food restaurant promised to “pay” their Drive Thru Express volunteers in North Carolina. For each shift (1 hour) worked, a volunteer will be paid 5 entrees. Well, what an interesting offer.

Interesting as it may be, this volunteer search received many negative responses from the public. The internet has gone wild in denouncing the company for this approach. Yes, it should be like that. That’s illegal, to say the least. As the chicken/labor/wage drama grows, the discussion gets more intense that we can practically taste the tension in the air. Below, we have selected some of the most viral responses to this whole drama. Let’s dive into it!

#1 Chick-fil-A was in the news recently, and not because of something good #3 Unsurprisingly, the initiative got blasted. The restaurant got called out for the idea online #9 Some people argued that what the restaurant was doing was allegedly not illegal so it must be fine, but Bona provided the facts 14 ‘Trashy’ Pictures That Are Full Of Gold

Top 8 Funny Advertisements Of All Time For Ideas Inspiration

Annoying Things That Can Drive Even The Calmest Nuts

Audi Hires A Photographer To Shoot Their $160,000 Car, He Uses A $40 Miniature Toy Car Instead

Artist Draws 35 Comics That Flaunt His Joyful, “Chaotic” Life With His Fiancée