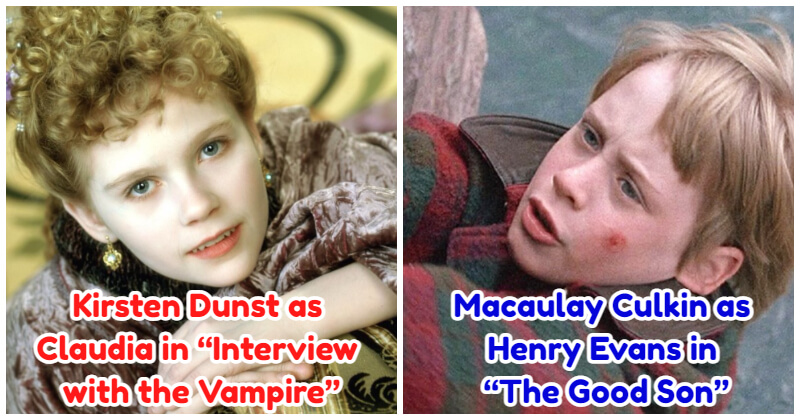 Talent is ageless and this is proved by actors who made their debut in front of the camera at an early age. They starred in various movies, even some blockbusters, and really shined on the screen. when it comes to child stars, many think that they portray cute and innocent characters that totally steal millions of hearts. However, some children made a name for themselves by playing dramatic or even dark roles that made viewers gasp in shock, then cheer in support.

Some of them were destined for a great career, while others were not able to take advantage of opportunities to develop their career. Below are 10 child stars who portrayed villains so well.

#1 Kirsten Dunst as Claudia in “Interview with the Vampire” Kirsten Dunst took the role of Claudia, a child vampire in the movie “Interview with the Vampire”. The character had a wicked taste for blood and murder. The actress shot the movie when she just turned 11. Miko Hughes is known for his role of Gage Creed in “Pet Sematary” as a child. Gage Creed, a fictional character created by Stephen King, is an innocent child who is accidentally killed by a speeding tanker truck.

#3 Martin Stephens as David Zellaby in “Village of the Damned” In the minds of horror fans, Martin Stephens is forever remembered as the satanic child villain in the movie “Village of the Damned”. At the age of 11, Martin Stephens played David Zellaby, the son of the film’s protagonist.

“Dark City” is a 1998 science fiction film about a city where it’s always night and populated by mysterious “strangers”. The strangers are aliens and one of them who has the body of a child is Mr. Sleep. The character was portrayed by the 10-year-old boy, Satya Gumbert.

#5 Harvey Stephens as Damien in “The Omen”

Harvey Stephens received global recognition when he starred as Damien in “The Omen”. The character is described as a tragic young man who is always surrounded by death and weird happenings. For his great performance, he earned himself a Golden Globe nomination. #7 Patty McCormack as Rhoda Penmark in “The Bad Seed” “The Bad Seed” was released as a successful but shocking 1956 movie. The movie starred Patty McCormack as Rhoda Penmark, the malicious child. The character is a manipulative and selfish girl who would never stop at anything to satisfy her wants.

#8 Macaulay Culkin as Henry Evans in “The Good Son” Henry Evans, the main antagonist in the movie “The Good Son”, is the monstrous and arrogant cousin and the archenemy of Mark Evans, the movie’s main protagonist. The character was portrayed by Macaulay Culkin. Lisa and Louise Burns, the identical twins, played the Grady sisters in “The Shining”. For their creepy hall-dwelling appearances and the immortal line, they became one of the most enduring horror duos During the filming of the movie, they were just 12 years old.

#10 Jacob Kogan as Joshua in “Joshua” When Jacob Kogan was 12 years old, he starred as Joshua in the movie of the same name. Joshua is a precocious child prodigy with unusual emotions. He manipulated and ultimately kills those around him to get what he wanted.