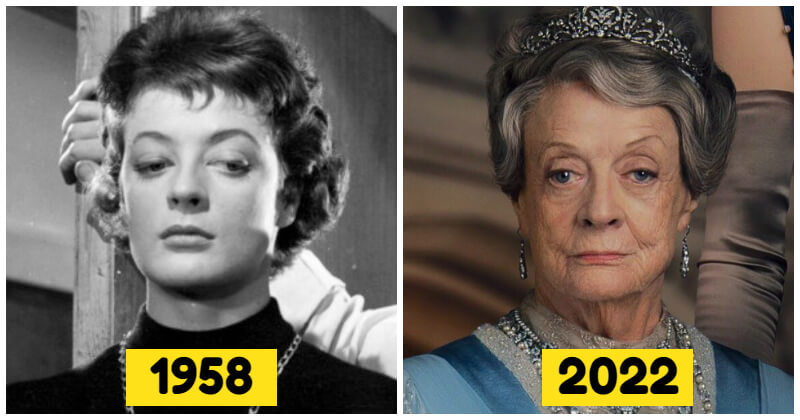 While most famous actors are thinking about retirement when getting older, others are still active and don’t have any plans to stop their acting careers. They all have fame and wealth, so the ultimate reason is certainly to devote themselves to the cinema industry. And that also explains why they’re so successful entire their career and how they deserve it. Because when you’re working with your passion, your success will follow you soon.

Today, these actors and actresses have kept their fire of passion for decades and still achieve a lot of recognition. In 2021, Anthony Hopkins, at age 83, broke an Academy record when becoming the oldest actor to win such an award. And he is not the only one who, like him, keeps working in the cinema world despite being older.

Today, we have compiled a list of some Hollywood actors who prove that aging is not a big deal when they have gifted talent. Maggie Smith is regarded as one of the most famous and outstanding English actresses. She started out in the 1950s in theater, shifting to film in 1956. Since then, her acting career has been counted more than 85 films and TV series alongside the world’s most renowned actors.

Her roles in Harry Potter and Downton Abbey have been one of the most memorable in her career, Now, at age 88, she is working on another film, and it has been reported that she will be part of another one that will start filming soon. Al Pacino is best-known for multiple iconic movies, including The Godfather, Scarface, and many more. Recently, at age 82, he has continued his successful career with the most recognized directors in the cinema world, such as Martin Scorsese, Quentin Tarantino, and Ridley Scott. He is far from retirement when announced that 2 films are about to be released. Before Ellen Burstyn started out, Burstyn experienced many jobs, such as modeling and dancing. She gained recognition with her performance in the 1964 movie, Goodbye Charlie, which made her study acting with Lee Strasberg.

In 1971, Burstyn made her breakthrough with The Last Picture Show. Later on, she started a very successful career in the cinema world. In 2022, at age 89, she still working in series such as Law and Order and The First Lady. Helen Mirren began acting by taking part in plays at school, which made her decide to be an actress as she finished high school. Her career has spanned over 135 acting roles and 6 projects that are bout to be released this year and in 2023. Anthoney Hopkins studied drama when he was very young and graduated in 1957. 10 years later, Hopkins started his acting career on TV, marking the beginning of a long-acting career, including more than 140 films. In 2020, at age 83, he won an Oscar for Best Actor for his portrayal in the drama The Father. Now, he continues to work on the sequel of that film named The Son. Sir Ian McKellen is regarded as one of the greatest English actors who has proven his talent by portraying many Shakespearean roles in the English theater. In 1964, he started acting on British TV, and in 1966 he obtained a recurring character in the series, David Copperfield.

He rose to his global stardom when appearing in X-Men and The Lord of the Rings. Now, at the age of 84, he keeps acting in independent films and the theater in his homeland. The actor started studying acting as a way to channel all the energy that kept him restless constantly. He found his opportunities in several classic films. Finally, he gave voices to many iconic movie characters, including Darth Vader and Mufasa in The Lion King. And in this year, at age 91, he returned to voice the Star Wars villain in the Obi-Wan Kenobi series. Morgan Freeman once landed minor roles in independent films in the 1970s. He kept acting in film and theater until 1978 when he obtained an award for his portrayal in the play, The Mighty Gents.

He made his TV debut in 1971 on the program, The Electric Company. Since then, he has never stopped working. He now has 7 films announced that are either in post-production or soon to be premiered. Michael Craine has been working in more than 170 productions as an actor. Later, he starred in the 1964 film, Zulu, which brought him global recognition. In 2022, at the age of 89, he appears in 3 films that are either planned or in the process of shooting, which will be premiered at the end of this year and the beginning of 2023. At the age of 86, Alan Alda is still playing dramatic roles, like on the show, Ray Donovan. He started out at a very young age, 22, in the 1958 television series. His best-known work is MASH, a production that is regarded as a TV classic. Clint Eastwood started out in low-budget films in 1950. He made his breakthrough in 1964 when Sergio Leone chose him for his rugged looks to star in his spaghetti westerns. Throughout his career, Eastwood has won 5 Oscars and multiple other awards for his performance as a director and an actor. He is also far from retirement when he starred in and directed Cry Macho. Judi Dench has a very formal academic background, which began at the Central School of Speech and Drama in her native country. After that, she was part of the Royal Shakespeare Company and the National Theatre Company.

She has achieved numerous awards for her performances in England and abroad. Her career enlists more than 130 acting roles, and at age 87, she is still active.

10+ Hollywood Actors Who Are Notoriously Difficult To Work With