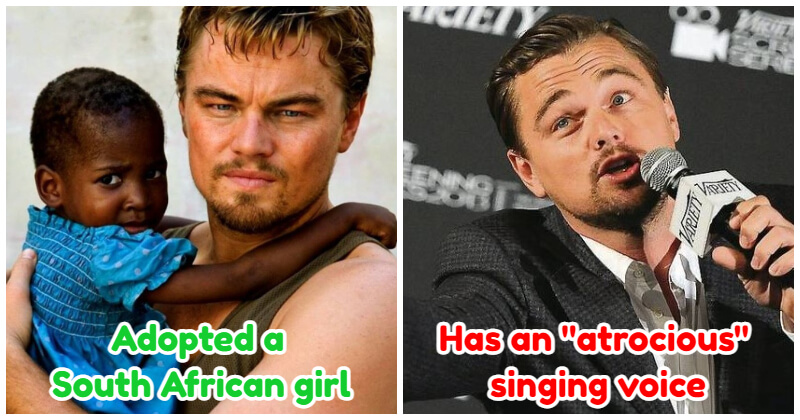 Leonardo DiCaprio is not a strange name. During his career, he has starred in some of the most influential films of all time. From taking the lead role of Jack Dawson in “Titanic” to his Academy Award-winning performance in “The Revenant”, it seems that there is nothing single role he doesn’t suit. Despite starring in 29 movies only, he has been placed eight times in the annual rankings of the world’s highest-paid actors.

Aside from his successful acting career, Leonardo DiCaprio is known as an intense environmental activist. He has done amazing things saving a green lifestyle and has plans to continue his eco-friendly legacy. Additionally, he has founded a nonprofit organization that regularly supports charities.

If you’re more curious about his life, scroll down to see. Leonardo DiCaprio’s name origin is especially interesting. His mother named him when she was pregnant with him. During a trip to Italy, his mom felt her baby kick for the first time while she was looking at a Leonardo da Vinci painting at the Uffizi Museum. Despite his name’s touching origin, DiCaprio was advised to change his name or used a stage name. His agent believed that his name was so strange and sounded like a foreign one that would prevent him from getting a role. However, the actor refused, and then he was jobless for a year and a half, even after attending 100 auditions. Thankfully, he didn’t quit his dream and change his name, as he now become one of the greatest actors in Hollywood. In an interview, the star admitted to having suffered from obsessive-compulsive disorder (OCD). Much of the detail of his mental illness is kept private. He forced himself not to step on every chewing stain or stop the urge to walk through a doorway several times.

#4 In 2009, Leo bought an island intending to create an environment-friendly resort Outside of acting, DiCaprio is devoted to environmentalism. The actor consumed 1.75 million dollars for a plan that a resort would contain 36 villas and be self-sustaining. Despite construction delays, building permits were eventually issued.

#5 He sponsored a South African girl while filming “Blood Diamond” While filming “Blood Diamond”, DiCaprio went and visited some nearby orphanages. There, he met and fell in love with a little girl so he decided to adopt her. Although he couldn’t bring her home to LA, he’s sent checks and supported her and the group home.

#6 He once won an award for being the “worst actor” We all know that DiCaprio is one of the greatest actors of all time, but that wasn’t always the case. In 2001, the great actor once received the Golden Raspberry Award for Worst Actor for his role in “The Beach” after the movie received countless negative reviews.

#7 Leo jumped into a frozen lake to save two dogs While filming “Don’t Look Up”, Leonardo DiCaprio jumped into frozen waters to save his two rescue Huskies. After pushing one dog out of the pond, the other one jumped in. Thankfully the 3 of them were all safe. Although he is a talented actor, he’s not a good singer. He wanted to join in the musical “Moulin Rouge” but he was refused due to his “atrocious” voice. Millvina Dean, the last living Titanic survivor, lived in a nursing home. Because she didn’t afford to pay the fees, she sold Titanic memorabilia to raise funds. A campaign to raise money was launched and kate and Leo donated 30,000 dollars.