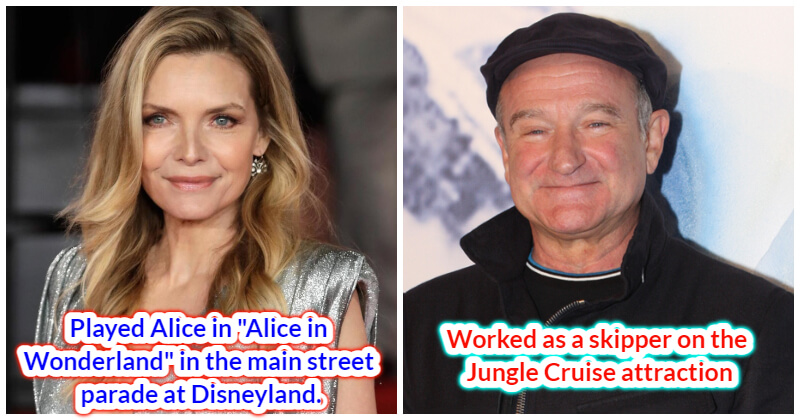 While many Hollywood superstars have exceptional advantages such as wealth, connections, and notoriety to help them climb ahead, a few of them, like the rest of working-class America, start from the bottom. Did you know that several celebrities began their careers in the film industry by working for Mickey Mouse at Disneyland?

Well, when it comes to Disney parks, there are a lot of things to talk about. Disney parks aren’t only some of the happiest places on the planet; they’re also where a few Hollywood celebrities got their start in the industry. You might be astonished to find that celebrities such as Michelle Pfeiffer used to work at a theme park. Even comedic legends like Steve Martin did not become overnight success makers. Curious to know more about other celebrities who worked at Disney parks? Scroll down and I will show you! Back in the mid-’70s, the Maleficent 2 actor, who plays Queen Ingrith in the next Disney picture, put her blonde hair to good use by playing the crucial role of Alice in Alice in Wonderland in the main street parade at Disneyland. When Disneyland initially opened, Father of the Bride star Steve Martin worked there for eight years. He wasn’t a character actor, either; he sold guidebooks at Frontierland before becoming a magician at the Magic Shop on Main Street. While most recognized for his role as the Genie, it was said that Robin Williams had previously worked at Disneyland. He is claimed to have worked as a skipper on the Jungle Cruise attraction. Bodyguard actor Kevin Costner also worked at the Disneyland theme park before he made it big. He worked as a tour guide on the Jungle Cruise, and it was there that he met his first wife, Cindy Silva, who was dressed as Snow White.

Wayne Brady, an actor, admits to playing a Winnie the Pooh persona at DisneyWorld when he was 16 years old. He said in a previous interview: “I worked at Disney when I was 16 as a character. I was Tigger.” Teri Garr is best known as Phoebe Buffay’s absent mother on Friends, but before she gave Pheebs a fur coat inheritance from her birth grandmother, Garr portrayed the Statue of Liberty (on roller skates, no less) in Disney’s Summer Spectacular performance in 1970. “I carried a torch that spewed confetti or Ping-Pong balls,” the actress recalled of the event. Joanna Kerns has been in Hollywood since the 1970s, but before winning her most famous role as Maggie Sever on Growing Pains, she was the Blue Fairy at Disneyland. She took up the role alongside Pinnochio in a parade. Taye Diggs had a role in a cabaret performance called Sebastian’s Caribbean Carnival at Tokyo Disneyland before going on to star in Broadway plays like Rent and films like How Stella Got Her Groove Back. Fittingly, the guy in control of all Disney animation began his career as an animator, working alongside Disney legends. He, too, worked as a tour guide on Jungle Cruise, and he attributes his employment experience with teaching him how to time a joke well. In the end, the future director of Toy Story understood the point. Kevin Richardson performed a variety of personas at the park before joining the Backstreet Boys. A Teenage Mutant Ninja Turtle and Aladdin were among the characters. Richard is one half of the sibling musical act. According to a Rolling Stone cover article, he began singing on Main Street in Disneyland. He wore an ice cream costume and wrote songs on napkins in his spare time. Alyson Reed is a skilled dancer. She is perhaps best recognized for her performance as Ms. Darbus in the High School Musical trilogy. She has also starred as a guest star on television episodes such as Nip/Tuck, Desperate Housewives, ER, Crossing Jordan, and others. Reed played Alice in Wonderland at Disney. Leanza Cornett was the first actress to represent a live-action version of Ariel, as in the little mermaid herself, during Disney’s Voyage of the Little Mermaid event. Cornett is also a well-known pageant winner, having been named Miss America in 1993. Ronald L. Ziegler is not a “celebrity” in the current sense of the term. He was, however, a renowned politician and former White House Press Secretary during Richard Nixon’s presidency. Ziegler, like Costner, formerly served as a captain on the Jungle Cruise, according to an old article published by Nick Thimmesch. Alexis Mateo is a well-known drag performer who was crowned Miss Gay Days in 2016. Her career began over 20 years ago, in 2001, when she was hired as a performer and dancer at Disney Parks. Sarah Butler is most recognized for her performance as Jennifer Hill in the I Spit On Your Grave franchise. Given how dark and awful those films are, it’s incredible that she got her start doing something completely different in the domain of Disney. Jodie Prenger differs from some of the other entries on this list in that she works on a Disney cruise ship. She was one of the lead entertainers on the Disney Wonder cruise. She also appeared on The Biggest Loser and won the I’d Do Anything competition. McEuen worked as a magician in Disneyland’s Magic Shop, according to his official website. After leaving Disney, he went on to have a lengthy and successful solo career until founding the Nitty Gritty Dirt Band in 1966. McEuen has done over 10,000 gigs in all, both alone and with his bandmates. Kathryn Joosten is perhaps most recognized for her work on both Desperate Housewives and The West Wing. She began her start as a performer at Disney World. She was a street performer at amusement parks before landing several guest appearances on television shows such as Roseanne, Seinfeld, Frasier, ER, and many more.