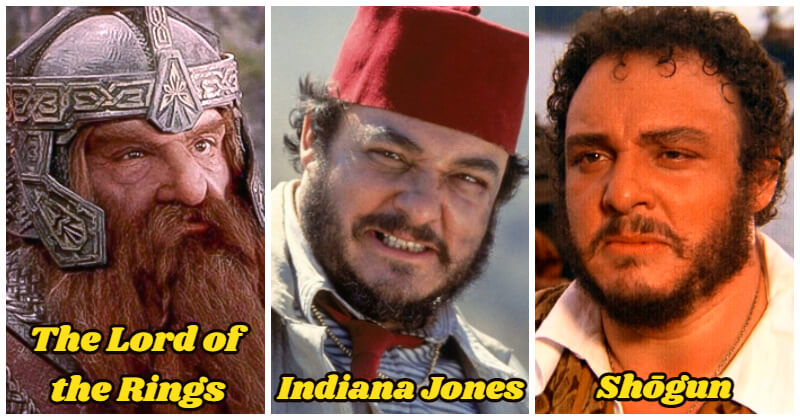 Some actors are considered to rely on some of the prominent roles that might stick with them forever. It sometimes happens when an actor portrays a role in a famous movie or TV show and later can’t get out from under its shadow. Actually, their performances in that movies are not that bad, but the audiences only recognize them in the old ones.

That’s why so many actors even hate the roles which are too brilliant that might ruin their future careers because of the big shadow of success in the past. Some actors and actresses have failed to make it big once again. However, some have managed to escape from the bad effects of successful movie roles. From Kevin McNally to Fiona Shaw, they have brilliantly hit the big time once again after portraying other excellent roles.

Today, we have compiled a list of 10 actors we remember from one movie or TV show that played other great roles as well. Let’s scroll down! Arnold Vosloo portrayed the cunning and intimidating Imhotep in the movies The Mummy and The Mummy Returns. This role truly brought him fame. He is still working in the cinema world to this day, but his roles are primarily supporting. You can also watch him in the Zartan in G.I. Joe: The Rise of Cobra and in different series, like Criminal Minds and The Blacklist. Rachel Brosnahan is mainly a TV actress, keeping appeared in series such as The Good Wife, CSI: Miami, and Grey’s Anatomy. Her career had a turning point with the role in the series, House of Cards, starring Rachel Posner for which she was nominated for an Emmy. But in 2018, she gained a Golden Globe and an Emmy for the role of Midge Maisel in the series The Marvelous Mrs. Maisel, and this work immediately overshadowed all her other projects, such as the movie, The Courier, where she acted alongside Benedict Cumberbatch. Kevin McNally is best known for his supporting roles. For instance, he appeared in Downton Abbey, The Crown, Doctor Who, Johnny English, and many other projects. In the series, Wuthering Heights, starring Tom Hardy, he portrayed Mr. Earnshaw, a rich man of high principles.

McNally’s most famous role was a reckless pirate in the Pirates of the Caribbean film series.

Source: © The Lord of the Rings: The Fellowship of the Ring, © Indiana Jones and the Last Crusade / Paramount Pictures, © Shōgun / Paramount Television

Dwarf Gimli is so charming, mostly thanks to the acting talent of John Rhys-Davies. He is also known for his role as Sallah in the Indiana Jones movies. But this is not all he did. He also appeared in famous TV shows, such as The Shannara Chronicles and Star Trek: Voyager. And his role in the miniseries, Shōgun brought the actor an Emmy nomination. Fiona  Shaw is best known to many people as Harry Potter’s mean Aunt Petunia Dursley. But the actress says that she has found her success on the theater scene. She also took part in multiple movies, including the roles of the perceptive Dr. Eileen Cole in My Left Foot and Carolyn Martens in the series, Killing Eve, which brought her a nomination for an Emmy. Ian McDiarmid was known for the role of Emperor Palpatine in the Star Wars film series. But he’s also a popular theatre actor. Ian took part in the TV adaptation of Crime and Punishment and in the horror movie, Sleepy Hollow, where he played Dr. Thomas Lancaster. We recognize Julian McMahon as the charismatic, cunning, and charming Cole from the hit TV series, Charmed. He took part in the third season as an assistant district attorney and later revealed himself to the sister witches as the demon, Belthazor.

Thanks to Charmed, McMahon turned into a very famous and sought-after actor. He worked in the series Nip/Tuck, along with 2 Fantastic Four movies. But it’s hard to remember McMahon in these superhero films because he portrayed Dr. Doom and wears a mask almost the entire time. In the 2000s, the series about the charismatic Dr. House was quite famous, it had incredibly high ratings and even handled secure 3 Guinness World Records. So the actors starring in the series rose to stardom. It’s probably that audiences remember Robert Sean Leonard as Dr. James Wilson exclusively. But it’s worth mentioning that the actor almost rejected this role because, at the time, he had a choice between 2 series, but he finally opted for House.

Before this starring role, Leonard dazzlingly acted in movies, such as Much Ado About Nothing and Dead Poets Society. His role as Neil Perry brought him a nomination by the Chicago Film Critics Association for Most Promising Actor. Rose Leslie portrayed the brave Wildling, Ygritte. Leslie was nominated for a Screen Actors Guild Award for this role but didn’t gain credit. At the same time, not many people recall her in other roles, such as a housemaid in the series, Downton Abbey.

She also portrayed the essential role of Maid Louise in the recent screen adaptation of Agatha Christie’s novel, Death on the Nile. In The Matrix, there were 3 agents, one of which was Agent Brown portrayed by Australian actor Paul Goddard. He appeared in epic chases and the well-known Trinity and Morpheus interrogation scenes. But not many people know that the actor also portrayed a big part as the protagonist’s son-in-law in the film about a charming piglet, Babe.

Review: Casey Anthony-Where the Truth Lies Detail: Should Watch or Not?

9 Times Producers Chose The Wrong Actors For The Role