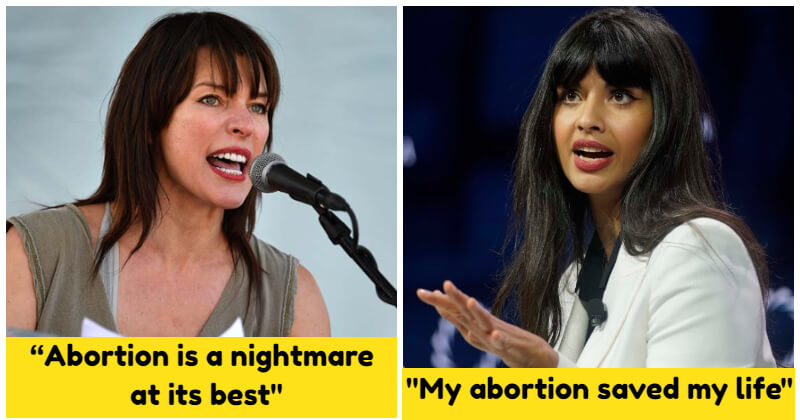 For decades, we have frequently heard warnings about the population crisis. As a result, abortion has become a constitutional right in the US, helping one in four women in the Us find safe abortions by the time they reach 45 years old. According to experts who took part in a United Nations Conference on World Population in Belgrade in 1965, abortion is truly the chief method of birth control in the world today. Thanks to the 1973 landmark ruling of Roi v Wade, women over America have had access to legal abortion.

Still, abortion is so difficult to obtain and its standing has never been more threatened than today. More specifically, Texas passed a law prohibiting abortion after six weeks, which is the time that women don’t even know they are pregnant. Or, the Supreme Court overturned Roe v. Wade, giving individual states the power to ban, eliminate or criminalize abortion on June 24, 2022. Therefore, people all over the world, including celebrities, have shown their outrage at the real threat that women’s reproductive can be taken over by politicians. That truly reminds some celebrities to raise their voice about their experiences with abortion.

Below are 10 abortion stories from famous women who are fighting the unconscionable threat to abortion access, to the world population, and eventually, to women’s health and freedom. Actress Minka Kelly voiced her concerns about mostly White men deciding the fate of women and the unwanted children women will be forced to bear. “When I was younger I had an abortion. It was the smartest decision I could’ve made, ” she wrote. “Having a baby at that time would have only perpetuated the cycle of poverty, chaos, and dysfunction I was born into.” She writes, “… outlawing abortion has never stopped women from attempting it.” British actress Jameela Jamil is known as an outspoken activist. The Good Place star shared her abortion story on Instagram and claimed that having an abortion when she was eight weeks pregnant was her choice.

“My uterus is mine to do what I wish with. It is my medical privacy, my freedom, and not something that should be state-owned,” Jamil wrote. She expressed her anger and disgust that abortion rights are being threatened and wrote on Instagram, “… ending abortion rights doesn’t end abortions, it only ends safe abortions.” Trinidadian rapper Nicki Minaj has opened up about the abortion she had when she was in high school. She stressed that having an abortion was one of the hardest things she’s experienced and haunted her since, but she believes she chose her decision. By speaking up and sharing her story, Minaj is paving a way for destigmatizing Black women’s right to decide. Nearly right after Politico leaked news that the Supreme Court planned to vote to overturn Roe v. Wade, American musician Phoebe Bridgers raise her voice on social media with her own story of abortion. “I had an abortion in October of last year while I was on tour. I went to planned parenthood where they gave me the abortion pill. It was easy. Everyone deserves that kind of access.” she wrote. A long time ago, actress Busy Philipps had spoken out about her abortion experience. She is extremely vocal about reproductive rights and says she “… cannot sit idly by while women’s rights are stripped away.” She credits her fame and success to the abortion she obtained at the age of 15. Critical of any laws that seek to control women’s bodies, Philipps’ advocacy for women’s rights is an absolute inspiration, and we’re so appreciative of her voice. In Variety’s Power of Pride cover story, Australian comedian Hannah Gadsby revealed her heart-wrenching experience of surviving rape and having an abortion. “I was assaulted, raped, and very, very vulnerable. How was I going to raise a child? I would have ended up dead. How is that pro-life? You can’t say women can’t have abortions and then provide absolutely no infrastructure to help them,” she said. The Girls star, Jemima Kirk, also revealed her own abortion experience on social media. In a video for the Center for Reproductive Rights’ Draw the Line Campaign, Kirke shared, “I still see shame and embarrassment around terminating pregnancies, getting pregnant, so I have always been open about my stories, always shared them, especially with other women.” Kirke became pregnant in 2007 with a boyfriend she didn’t want to be connected to for the rest of her life. She said, “My life was just not conducive to raising a happy, healthy child,” she says. “I just didn’t feel it was fair. So I decided to get an abortion.” Actor Milla Jovovich shared that she had to have an emergency abortion when she was filming on location in Eastern Europe. She went through pre-term labor at four-and-a-half months pregnant and describes the experience as being one of the most horrific of her life. “Abortion is a nightmare at its best,” she said. “No woman wants to go through that. But we have to fight to make sure our rights are preserved to obtain a safe one if we need to. I never wanted to speak about this experience. But I cannot remain silent when so much is at stake.” Legendary Fleetwood Mac singer Stevie Nicks has shown her worry about abortion rights since Democratic Supreme Court Justice Ruth Bader Ginsberg died in September 2020 – and her worries were justified. In 1979, when Fleetwood Mac was at her peak of success and fame, Nicks fell pregnant. She decided to end the pregnancy, claiming there was no way she could’ve raised a child, and persisted in the band. “If I had not had that abortion, I’m pretty sure there would have been no Fleetwood Mac,” said Nicks.