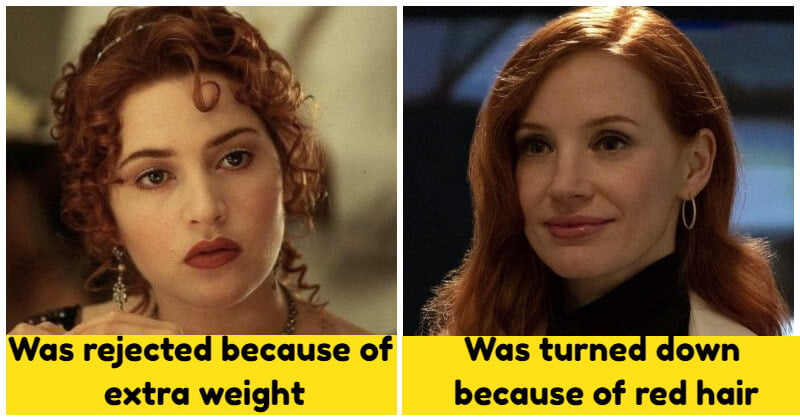 We all agree that many challenges will come up in our lives and every road to success is full of obstacles. And the ability to deal with challenges and overcome failures are essential qualities for any profession, including actors. Still, acting is always considered one of the most competitive jobs in the world. Therefore, every actor finds the most difficult at the beginning of their career. Even extremely famous or Oscar-winning Hollywood stars had to struggle with small roles in some movies that pave a way for the turning points of their acting career.

When these actors managed to overcome their challenges, they went on to do a lot of amazing things and achieved their success in the end. That truly inspires us that nothing can stop us when people are determined to get it. From Kate Winslet to Anthony Hopkins, they have all qualities of successful people and deserve what they have earned today.

Here are 15 celebrities who never give up on the way to their dream. Let’s scroll down and check them out. Maggie Gyllenhaal has had to face criticism for her appearance. That’s why she was not given certain roles – romantic ones, for example. Gyllenhaal got recognition and the first award for her role in the film Secretary. However, Maggie confesses that she is still unhappy with many things in Hollywood.

Interestingly, the 37-year-old actress was turned down for a role for being “too old” to play the lover of a 55-year-old man. In 2021, Maggie made her movie directorial debut. Still, her movie The Lost Daughter won Best Screenplay at the Venice Film Festival. Kate Winslet took part in amateur performances at school and in local youth theater when she was very young. But her road to fame was full of challenges. Kate revealed that she had always carried a bit of extra weight, her classmates would joke about her “fat.” And her soon experience in acting reflected this dynamic. In her theater troupe, Kate couldn’t take the main roles due to her excess weight.

As she grew up, Winslet was also too fat for an acting career. In 1992, she portrayed the role of a daughter of an obese woman in Anglo-Saxon Attitudes. During the shooting, the director of the movie cruelly said that Kate looked like the actress who played her mother. Then the future star decided to lose weight.

The breakthrough of the actress was her role in the psychological drama Heavenly Creatures. But the global fame found her after her role as Rose in Titanic, which Kate manipulated to get thanks to her persistence and energy. Carey Mulligan was rejected in every theater school that she came to. In addition, she later auditioned at the London Drama School “torture.” Its representatives offered to allow Carey to try herself as the host of a kids’ show. Mulligan was strongly shocked by this experience.

Now, her list of awards includes a BAFTA for the best actress in An Education and a Critics Choice Movie Award for her role in Promising Young Woman. Everyone knows Carey Mulligan for the role of Daisy in a big-budget film adaptation – The Great Gatsby. Before getting the main role in Bombshell, Kerry Washington was fired from 2 other series. The pilot episodes that were filmed with her were eventually redone. According to Kerry, in both cases casting directors wanted her to act more stereotypical and the actress disagreed with that.

After that, she gained some nominations, including an Emmy Award for Best Actress and a Golden Globe. Fred Astaire is known as the greatest dancer on stage and in film. However, he failed to get famous until he was older. Although he found his early dancing successes, a movie career constantly eluded Astaire. He frequently passed auditions but couldn’t attract any interest from studio executives. Sadly, at Fred Astaire’s screen tests, an executive wrote about Astaire, “Can’t sing. Can’t act. Slightly balding. Can dance a little.”

It was not until the dancer was 30, that he determined to try once more to break into a movie in Hollywood. And he finally made it. He found his first opportunity in a small role in Flying Down to Rio, and it turned out to be his spotlight in the movie which helped him an important element of Hollywood musicals in the future. Before being famous for her role in Friends, Lisa Kudrow was unfortunately fired from the sitcom Frasier on the third day of the pilot’s episode rehearsal. The producers of the series determined to replace her with another actress. Although Lisa Kudrow had been stressed at the beginning, she still sought the energy to go forward.

And that is how she deserves her Emmy Award for Best Supporting Actress for the role of Phoebe in Friends several years later. Besides, Kudrow and her co-starring colleagues turned into the most highly-paid TV actors of that time, making $1 million per episode in the 9th and 10th seasons. After having portrayed multiple roles in movies and on TV in Australia, Naomi Watts decided to search for success in Los Angeles. But her first roles in Hollywood weren’t successful. Naomi said that she was living hand to mouth, not being able to pay rent, and she even couldn’t pay for her medical insurance.

Still, the worst thing was that the actress’s candidacy was so often turned down that she began to think about her professional failure. That was good for Naomi when she auditioned. She was tense, nervous, laughed too much, and this, in her own words, made people annoyed. The breakthrough was her role in the cult film Mulholland Drive, which brought Naomi Watts her first significant awards. Afterward, many offers rained down on the actress. Keira Knightley has her genre of a family of actors and debuted in films at an early age. But she actually rose to stardom after the premiere of Pirates of the Caribbean. But Keira, like many other actresses, was turned down many times before. Knightley even said in an interview that she wouldn’t advise her daughter to get into acting because the amount of rejection she faced at the beginning was “heartbreaking.”

“And it doesn’t matter what kind of person you are, it’s impossible for that to not take a toll. Even if you’re successful, you still have to go through a load of rejection,” the actress revealed. Source: © One Flew Over the Cuckoo’s Nest / Bryna Productions

To seek an opportunity in Hollywood, 20-year-old Jack Nicholson first worked as an assistant in the animation department of MGM. After that, he began to take his first lessons in stage speech and acting. This strategy worked out – at the end of the ’50s, he got his first roles in movies, but he couldn’t find success in acting yet.

Nicholson rose to his stardom after the release of the cult movie Easy Rider – Nicholson turned 30 then. Moving on, he began to get offer after offer for roles from well-known directors. Source: © The Silence of the Lambs / Orion Pictures and co-producers

Anthony Hopkins chose to be an actor at 15. But it seemed that he only loved doing theater. In the ’70s, Hopkins shifted to Hollywood but appeared there mainly on TV shows. Disappointed with the idea, the actor turned back home in the late 80s,  where he decided for himself that his acting career is about to close permanently.

The actor didn’t get fame until he turned 50. He found his opportunity with the role of Hannibal Lecter in The Silence of the Lambs. The director said he needed a true “Shakespeare monster” that’s why the offer belonged to Anthony Hopkins. Hopkins got his first Oscar for this role in 1992. Mindy Kaling rose to global star after her role as Kelly Kapoor in The Office, where she was also known as roles of scriptwriter, executive producer, and director. Kaling and her colleagues (scriptwriters and directors) of The Office were nominated for Emmy Awards for the excellent comedy series 6 times in a row.

Still, the famous actress shared in her interview that she was fired from the sitcom where the producer originally wanted her to portray herself. The reason for the dismissal was that they didn’t find her humor or pretty enough to have the show rotates around her. Before getting her first prominent role, Hilary Swank had some small roles in different films. At the beginning of her career, the actress portrayed a single mother in Beverly Hills, 90210. But instead of the promised 2 years of work, her character was cut after Episode 16. Swank later felt sad, believing that if she was not good enough for Beverly Hills, 90210, she wouldn’t be able to earn anything.

However, one year later, the actress got the opportunity to portray the main role in the independent movie named Boys Don’t Cry, which helped her bring home an Oscar. 5 years later, she earned her second one for her role in Million Dollar Baby. Before Twilight, Pattinson had nearly no prominent roles in movies. Still, the famous actor once confessed that filmmakers almost fired him because they considered him too serious.

However, even after the Twilight saga that made him famous, the actor came across difficulties in his acting career. In 2017, he revealed that it was hard for him to get new roles because he was not as cool as Leonardo DiCaprio. And the movies he took a role in then, were not that profitable. Pattinson was even thinking at that moment that his luck was over.

But he kept going ahead, and it brought results. In the last few years, he’s shown up in such prominent movies as The Lighthouse, Tenet, The Devil All the Time, The Batman, etc. Reese Witherspoon, whose career is at its peak now, has said that she was often knocked back at the beginning of her career. Frequently, Reese had to hear that she was the director’s second choice for the role. That means she was always worse than some other more suitable actress. But she just kept going and never let these comments upset her.