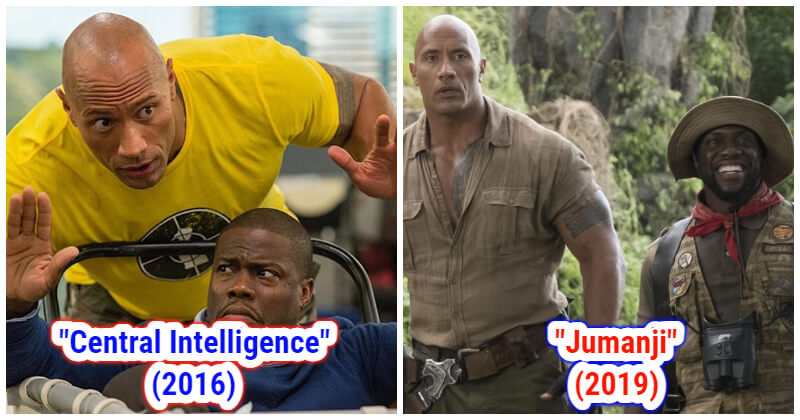 A good actor not only shows his personal talent, and skills in acting but also knows how to work well with his partner in the movie. That plays an important role in the success of the movie as a great collaboration of actors will make the scenes more vivid and appealing. In contrast, if they can’t cooperate well, they will make the scenes blatantly unconvincing no matter how good their acting is.

In fact, there are many acting duos that float the boats of audiences. They actually grip the attention with their epic chemistry that amps up the movie’s success. They even make fans wonder if they have any special relationships in real life.

In this post, we highlight 12 onscreen duos that boast marvelous chemistry. Their great bond is a huge part of the movie success they starred in. Then directors happily oblige in casting them again and again. Kevin Hart and Dwayne Johnson have such incredible chemistry that actually wow us when they appear together. They earn raves for their collaboration in movies like the Jumanji franchise and Central Intelligence. In addition, they have worked on other projects together, like the animated movie DC League of Super Pets. Emma and Jonah first shared screen time in 2007’s Superbad, the actress’s feature movie debut. 11 years later, they reconnected in the dark comedy Maniac where they play two characters who are assured that a miracle drug will solve all of their issues. Alan Rickman and Emma Thompson first appeared together in the romantic drama Sense and Sensibility in 1995, and later reunited in Love Actually in 2003. They are also well known for their roles as Severus Snape and Professor Sybil Trelawney in the Harry Potter movies. The charismatic couple has appeared in 6 films together, including 2 Ocean franchise films. Thanks to their great chemistry, they ignite the emotion of audiences in any movie they star together. Their most recent appearance together was in the 2022 romantic-comedy Ticket to Paradise, where they play a divorced couple. Drew Barrymore and Adam Sandler gained huge attention thanks to their sweet couple acting on 50 First Dates. They also starred together in a different romantic comedy 6 years prior. Adam Sandler portrays a singer in the movie The Wedding Singer, and Drew Barrymore plays a waitress. Once they realize they are dating the wrong individuals, the two of them fall in love with one another. This duo seems to enjoy working together, they have shared the screen 5 times. Their impressive roles were in comedies like 21 Jump Street and its sequel 22 Jump Street, This Is the End, and Hail, Caesar!. James and Seth first met while filming Freaks and Geeks when they were youngsters. They then co-starred in numerous other films. Comedies like Pineapple Express, This Is the End and The Disaster Artist rose the fame to this duo. The two actors, who are close friends in real life, have shared cameo and leading parts in numerous movies. Their most well-known film is perhaps Good Will Hunting, but two years later, in Dogma, they played significant roles. They also collaborated on the screenplay for their most recent project, The Last Duel. In 1995, Salma and Antonio worked together for the first time on the action film Desperado, in which they played the lead characters who fell in love. They collaborated on other projects over the ensuing years, including Frida, the Desperado: Once Upon a Time in Mexico prequel, and their most recent film, Hitman’s Wife’s Bodyguard. This couple’s on-screen chemistry is palpable given that they are also married in real life. Over the years, Melissa and Ben have acted together in a variety of films, including the comedies Bridesmaids and Superintelligence. Additionally, the couple established their own production firm. Keanu and Sandra appeared together in two memorable scenes in the 1994 thriller Speed and the 2006 romantic drama The Lake House. They also became friends as a result of their cooperation on these initiatives, and they still think highly of one another after all these years. Jake plays a charming pharmaceutical sales representative, while Anne plays a young woman with Parkinson’s disease in the movie Love & Other Drugs. The two also portrayed a couple who wed without truly falling in love with one another in Brokeback Mountain, which was released five years earlier.