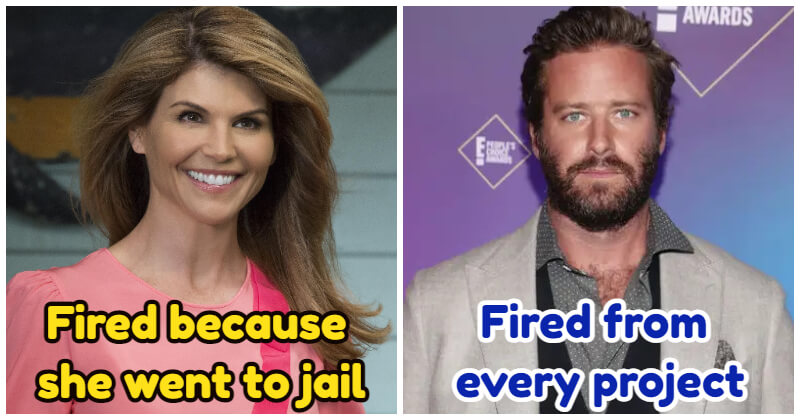 Storylines in our favorite movies sometimes aren’t attractive as dramas behind the scenes. Movie stars and producers both have big egos that might lead to serious conflict. Still, actors often show big personalities that make people don’t want to work with them because they know it’s going to be challenging to deal with such a large personality. Sometimes filmmakers can’t handle the problems during the shooting. If producers or directors feel that they can’t work with actors who have bad behavior on set, these actors will be fired.

In fact, many showrunners decided to cut some actors during the shooting to ease tensions. It might be a difficult decision due to many bad effects on the film crew when the cast is changed. However, the entire movie will be ruined and it sounds worse than keeping the actors who already became the risk of destroying everything. So the reason why some actors got fired on set is now easy to understand.

Below are 17 actors who were given their marching orders from their roles because of bad behavior. The actor was eventually fired in March 2001, just after being arrested for investigation of being under the result of drugs and then checking into rehab. Armie Hammer was fired from Billion Dollar Spy, Shotgun Wedding, and TV series The Offer, leaving him fired from everything he was set to appear in that hadn’t wrapped production yet because of sexual assault allegations and alleged messages where he called himself a cannibal. Charlie Sheen is known for being fired from Two and a Half Men for erratic behavior, drug use, and inflammatory comments. His character was killed off, and Ashton Kutcher took over the lead role on the show. Kevin Spacey’s role in House of Cards was cut due to sexual assault allegations. Kevin Spacey was fired from the film after finishing the shooting, once again due to the same sexual assault allegations. His role in that film was taken by Christopher Plummer, who re-filmed all his scenes in nine days and was nominated for an Oscar for his performance. Sasha Mitchell’s role was cut from Step by Step after being arrested for domestic abuse. Surprisingly, he still came back for a Season 7 episode as a guest. Roseanne Barr got fired from her titular sitcom role in the Roseanne reboot after making offensive and racist comments about Obama advisor Valerie Jarrett. The show was later canceled and then came back as The Connors, with Roseanne’s character being killed off. Steve Burton was fired from General Hospital for refusing to get the COVID vaccine. His character, who he had played since 1991, was killed off after Burton decided to leave the show rather than get the vaccine. Jussie Smollett revealed he’d been at the center of a homophobic and racist attack – then he messed everything up He was charged because of making a false police report and fired from the fifth season of the Empire series. Hartley Sawyer was fired from The Flash because of inflammatory tweets. “The only thing keeping me from doing mildly racist tweets is the knowledge that Al Sharpton would never stop complaining about me.”, he twitted. Danny Masterson was fired from The Ranch due to sexual assault allegations. Masterson denied the allegations, claiming they’d already been investigated and dismissed years prior and saying he was “disappointed” in Netflix’s decision. His character Rooster was certainly killed on the show. Gina Carano left The Mandalorian after comparing being a Republican to being a Jew living during the Holocaust. The actor actually had made controversial comments on social media. Jason Mitchell couldn’t return to The Chi due to accusations of sexual harassment on set. The season 2 showrunner Ayanna Floyd Davis said, “Ultimately everyone was well aware of Jason’s behavior and his multiple HR cases.” Surprisingly, Mitchell was also fired from the Netflix movie Desperados. Shannen Doherty was forced to leave her hit series Beverly Hills, 90210 because of being “difficult” during filming and having issues with her costars, including Tori Spelling. Lori Loughlin was fired from Fuller House because she went to jail for her role in the 2019 college admissions scandal. She served two months in jail and was not in the fifth and final season of the show after appearing in the first four. Isaiah Washington’s role in Grey’s Anatomy was cut after using an anti-gay slur on set. He’d later declare it wasn’t directed at anyone, but he actually aimed at his costar T.R. Knight, who is gay.

M3GAN: Leaked Story Behind-What Will Have In M3GAN?