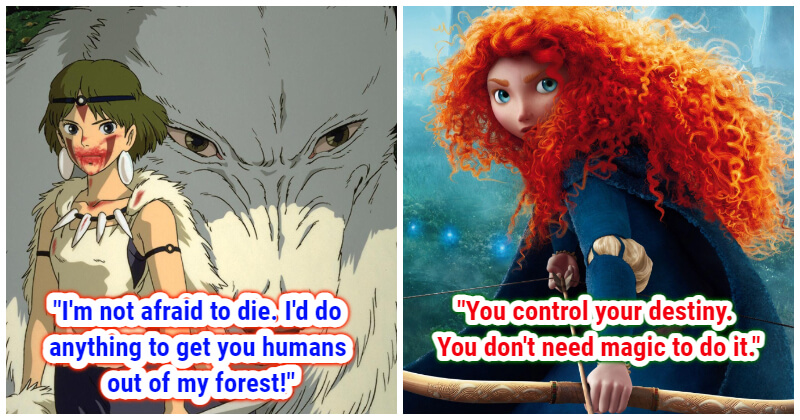 Due to the rapid development of Disney and other film companies, the role of the princess in TV and movies has mostly been stereotyped as the love interest or the damsel in distress. For instance, in “Snow White and the Seven Dwarfs,” the princess Snow White represents the ideal woman of that time. But there isn’t much to say about Snow White other than she is lovely, sweet, and beautiful. She does not do much for the development of the plot since she seems to do nothing but wait for Prince Charming to save her. With Snow White, the stereotype of the traditional Disney princess is formed and remains for more than two decades.

This post is for you if you wish to see movies that break the typical princess motif and give a new perspective. Scroll down to see 10 princess films that challenge stereotypes. In the story “Tangle,” a witch imprisons a princess with unusually long hair in a tower. However, everything in this movie is done for a reason, a reason, and an identity. Rapunzel’s escape from the tower had a cause and effect, and there’s a reason why her hair has to be long. Every detail helps the plot develop. Rapunzel also chooses to save herself rather than simply waiting for a handsome prince to come and save her. “Raya and the Last Dragon” might rank among the best Disney princess films thanks to its mixture of spirits, warriors, and mythology. The way she leads a mission and handles herself with a sword easily puts her in the role of an action hero. San, the protagonist of “Princess Mononoke,” is not a princess in the traditional sense. But she does guide a mysterious realm of spirits and other supernatural beings in their battle against the Emishi armies.

Several elements contribute to Princess Mononoke’s reputation as a masterpiece of the fantasy genre, including animation and a unique story by Hayao Miyazaki. Whether or not she is a princess, the movie’s leading lady is undoubtedly one of Ghibli’s most fascinating. The princess in the movie “The Princess” is skilled in martial arts. She is engaged to wed the son of a cruel king. She abandons him at the ceremony since she can’t accept the marriage. Tragically, the prince and his warriors conquer the castle and arrest the royal family. “Enchanted” is a story about Giselle. She is a beautiful, lovely, and kind girl who will tie the knot with a prince. But she is suddenly thrown into the real world by Queen Narissa’s spell. She has to adapt to the new life with many problems. No matter how hard it is, she is always positive and hard-working.

Merida from “Brave” has been one of the most courageous of any Disney heroine. She does not just open and loudly reject the princess’s responsibilities that she dislikes. She even competed with other princes and won. This movie is one of the strongest mother-child stories in any animated Disney film, as Merida tries her best to save her mother, her kingdom, and herself. The perfect example of a princess-themed action film is “Snow White & The Huntsman”.

The fantasy and fairytale elements are less important than the battles, magic, and monsters. It may not be as good as “Game of Thrones,” but the movie is nevertheless a fascinating fantasy with attractive additional features viewers want to watch. Mulan is undoubtedly a strong female royal protagonist, even though, according to the definition, she is not a Disney princess. Mulan has a record of winning several battles. She succeeds in nearly completely killing the Hun army, making her a hero, honorary royalty, and achieving a status just above the Emporer.

Moana, the chief’s daughter, set out on her own on the ocean in search of a demigod to recover the Heart of Te Fiti and preserve her island. Disney’s Moana is undoubtedly one of their bravest female leads. She is one of the few who gets up on her own and pursues her goal. “The Princess Bride” includes about everything a fantasy lover might want. The plot includes sword fights, wizards, pirates, and torture chambers. And as with other movies in the genre, this one also focuses on the romantic and fantastical aspects.

10+ Actresses Who Willingly Sacrificed Their Beauty For A Movie Role

10 Times Actors Hated Playing A Character But Still Nailed It