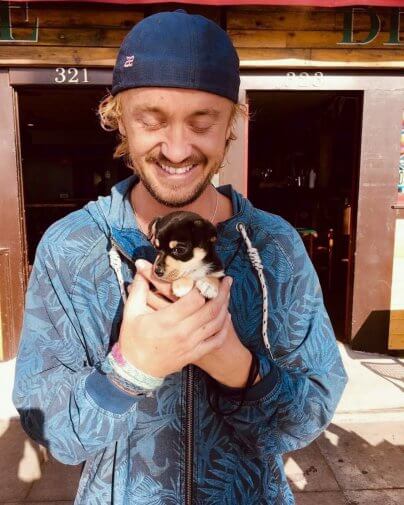 British Harry Potter star – Tom Felton is well known for his various roles in movies and TV shows. Being an actor for more than 25 years, he’s now also a musician and a book writer. His latest book is scheduled to be released this October, 2022 titled “Beyond the Wand: The Magic and Mayhem of Growing Up a Wizard”. He is also loved on social media for updates of his companion – a black Labrador named Willow whom he adopted back in 2018.

Tom Felton and his ex-girlfriend Jade Olivia were kind of a happy family when paparazzi captured many family moments when the couple walked the dog out, took her on their trips. It was only 1 month after vets found out of her sickness that she passed away. As Tom shared loving words on his Twitter and Instagram, many fans sent their supportive messages to Timber and also Tom and Jade. It took Tom a hard time to move on and he had a Timber tattoo on his arm to remember his longtime friend. Later on, Tom and Jade  have separated in 2016, after almost a decade together, leaving fans and audience with nostalgia.

While browsing Tom’s social accounts, it is easy to see what he loves posting about most besides his works and daily life! The movie star took Willow in from a friend when she was still a puppy. Even when it’s dining time, it’s when they go out on the street, to the beach, bedtime or just chilling time in the garden, Tom always keeps his puppy in sight. This wholesome behavior awes his fans too much since they know he’s such a dog person and keep sending him video edits, fanarts and sometimes merches of Willow.

On Halloween of 2021, Tom dressed himself and Willow in Hogwarts uniforms and Harry Potter fans absolutely loved it! It soon went viral among the fan community and dog lovers on the Internet. You may all get access to this amazing gallery of our dog-dad and his adorable pup on his Instagram @t22felton. Check it out now for more wholesome and lovable posts of these two cuties!

#3 He’s not only a pet owner, but a dog lover in general

Tom took after abandoned dogs several times. You may find other dogs’ pictures on his Instagram as he loves taking photos of doggos. Tom is a man who is full of softness and love as he cares about Willow and other animals as well. He’s full of husband material! For a long time, Tom has not officially confirmed to be in a relationship with anyone, but we all know who’s going to be his wife is gonna be a lucky girl!

It’s always warmhearted to see celebrities showing support and love for such cute animals. They inspire us and many more to love and take care of our little family members. Go visit https://aubtu.biz/ frequently since we update the most touching stories about pets and animals!

22 Photos Of Shameless Cats That Break The Mold

Guy Can’t Have A Cat, So He Cuddles And Takes A Pic With Every Cat He Meets