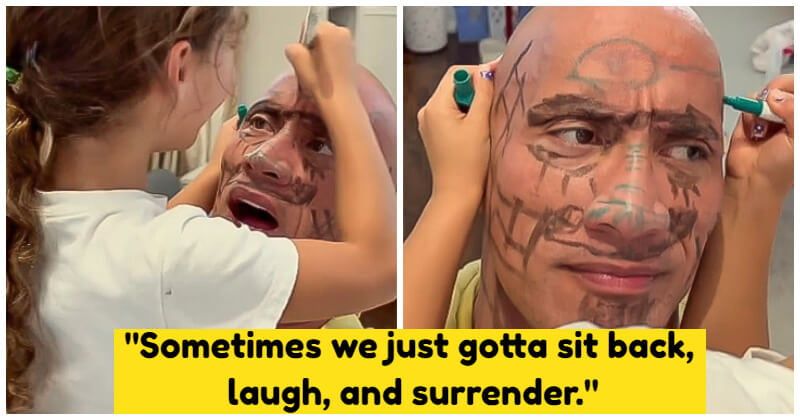 Fathers who play an important role in every child’s life have a huge impact on a child and help shape their kid into the person they become. That’s why fathers need to spend time as much as they can with their children. Because parenting is never easy that is always associated with big responsibilities and challenges for anyone, so we have to play and talk with them so that we can understand what they need. Actually, it turns out to be more interesting when we raise our kids than we use to think. When people take up the role of lightening the mood of our children’s emotions, we find out that fathers seem to be happier with their kids than mothers. And celebrity fathers are no exception.

Some famous dads really enjoy their moments with their kids. Some actually are bound to go crazy because of their children. And these devoted fathers are willing to share these surreal situations with their millions of followers on social media that we can’t stop laughing and bless their happy families.

Here are some celeb dads living in an endlessly unpredictable comedy show. Scroll down and enjoy! The Rock is known as a hands-on father who often spends time with his two youngest daughters. He shared a video of his then 3-year-old in the car on Instagram in 2021, explaining she was repeatedly singing the same song for more than 15 mins. He wrote, ’’Sometimes we just gotta sit back, laugh, and surrender.’’ David Beckham has proven that even celebrity parents can be a cause of embarrassment for their teenage kids. His beloved son, Brooklyn once asked him to drop him around the corner of his school to avoid being noticed. But Beckham wanted to “react” to his son’s behavior by opening up his car window and shouting “I love you!” to him. Ryan Reynold and his wife, Blake Lively, share 3 daughters whose ages respectively 7, 5, and 2. The movie star is famous for his sharp sense of humor and often shares his hilarious tweets about his personal life on his account. Once he wrote, ’’My daughter just sneezed into my yawning mouth. They seemed really pleased with herself.’’ The 51- year-old actor Taye Diggs has a 12-year-old boy named Walker. He enjoys spending time reading with his son and the dedicated father does everything to keep his son entertained. Will Ferrell who is a dad of 3 lovely boys, often uses his sharp sense of humor to share about his life. The comedian was honest about the bittersweet challenges of raising three kids under the same roof and defined his daily life as the following: ”I can only imagine, but I sometimes equate it to what it must be like running a prison.” The 41-year-old singer Justin Timberlake and his wife, actress Jessica Biel, are parents to 2 sons, ages 7 and 2. Timberlake was honest about the not-so-glamourous side of fatherhood and defined it as an “extremely humbling experience.” he added admitting, “I’ve never had more poop on my person!” Jim Gaffigan is known for having 5 kids and revealed that they “still constantly surprise him in different ways.’’ Several years ago, the 55 year-old-actor shared a situation that happened with his youngest son, “Ew, there’s fruit in this ice cream! My 5-year-old after he begged for strawberry ice cream.” Neil Patrick Harris and his husband David Burtka have 11-year-old twins Harper and Gideon. When their boy welcomed the second Christmas, Harris shared his hilarious situation that all parents can understand, “Up until 2 am constructing a table with wooden trains for Gideon, and all he wants to do is play with a broom.’’