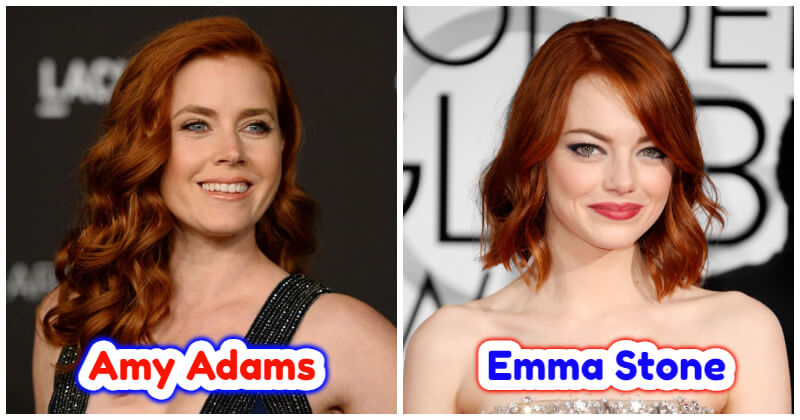 In the 21st century, everything is changing rapidly, especially fashion. We can say that no fashion trend is permanent. Every year, new trends come and go, from hairstyles to clothes.

Changing the color of one’s hair has been one of the biggest trends in recent years. We have been influenced to change our hair color by celebrities and social media influencers. And everyone has different options. Some want blonde hair, while others prefer black hair. However, a lot of people find redheads really attractive. This is a stunning color that gives you a fiery appearance. Do you know how special redheads are? Only 2% of the world’s population has naturally red hair.

Many talented actresses have made memorable marks in the entertainment industry with their iconic redhead. If you are thinking of dying your hair red, then take some inspiration from these ginger-haired beauties. From Bella Thorne to Emma Stone, discover 20 famous red-headed actresses below. Amy Lou Adams is an American actress who was born on August 20, 1974. She has appeared three times on annual lists of the highest-paid actresses in the world. She is known for both her humorous and tragic roles. She has been nominated for six Academy Awards, seven British Academy Film Awards, and two Golden Globe Awards among other honors. Her breakthrough performance was in Steven Spielberg’s biography “Catch Me If You Can” (2002). American actress Emma Stone was born on November 6, 1988. She has received several honors. She was the highest-paid actress in the world in 2017 and one of Time magazine’s top 100 most important people.

She became well-known for her role as Gwen Stacy in the superhero movie “The Amazing Spider-Man” (2012) and its follow-up. She received the Best Actress Academy Award for her performance as an aspiring actress in the 2016 romantic musical “La La Land.” American actress Debra Lynn Messing was born on August 15, 1968. She made her breakthrough as Grace Adler, an interior designer, in the NBC sitcom “Will & Grace.” She was nominated for seven Golden Globe Awards and five Primetime Emmy Awards as the Outstanding Lead Actress in a Comedy Series. English actress Eleanor Elizabeth Bamber was born on February 2, 1997. Her 2017 portrayal of Hilde in “The Lady from the Sea at the Donmar Warehouse” earned her third place at the Ian Charleson Awards in 2018.

She is renowned for her roles in television shows and films like “Pride and Prejudice” and “Zombies”, “High Resolution”, and “The Falling”. Madelaine Grobbelaar Petsch is an American actress and YouTuber who was born on August 18, 1994. She is recognized for her roles as Cheryl Blossom in the television shows “Riverdale” and “Marissa in F the Prom” on The CW. Annabella Avery Thorne, an American actress, model, singer, and writer was born on October 8, 1997. She has received a number of honors.

Thorne originally gained notoriety for her performances as Ruthy Spivey in the drama series “My Own Worst Enemy” and Margaux Darling in the series “Dirty Sexy Money”. She rose to fame thanks to her portrayal of CeCe Jones in the Disney Channel sitcom “Shake It Up” (2010–2013). Canadian actress Rachelle Marie Lefèvre was born on February 1st, 1979. She has acted in the television show “Big Wolf on Campus.” She starred in the ABC medical drama “Off the Map” in 2011. Nicole Mary Kidman is an American and Australian actress and producer who was born on June 20, 1967. She has a reputation for working on several films in a variety of genres for film and television. She’s remained one of the highest-paid actresses in the world for years. She has won various honors, including six Golden Globe Awards, an Academy Award, a British Academy Film Award, two Primetime Emmy Awards, and more. American actress and singer Lauren Anne D’Ambruoso, born February 20, 1978, is also known by her stage name Lauren Ambrose. She performs on Broadway, in movies, and on television. Isla Lang Fisher is an Australian actress and writer who was born on 3 February 1976. In the Australian serial opera “Home and Away,” Fisher gained notoriety for her portrayal of Shannon Reed.

After numerous performances on theater and television, Fisher made a successful move to Hollywood with her portrayal of Mary Jane in the live-action “Scooby-Doo” film in 2002. She has starred in movies including “Wedding Crashers” (2005), “Confessions of a Shopaholic,” and others. Julie Anne Smith, better known by her stage name Julianne Moore, was born in the United States on December 3, 1960. She has been active in the film industry since the early 1990s and is renowned for her performances in both indie and big-budget films that focus on women. She has won multiple honors, including two Golden Globe Awards, an Academy Award, a British Academy Film Award, and two Emmy Awards. Alyson Lee Hannigan is an American actress and television host who was born on March 24, 1974. She was most famous for playing Willow Rosenberg in the 1997–2003 television series “Buffy the Vampire Slayer” and Lily Aldrin in the sitcom “How I Met Your Mother” (2005–2014). Lindsay Dee Lohan, an American actress, singer, songwriter, producer, and businesswoman, was born on July 2, 1986. Her big break was in the movie “The Parent Trap” from Walt Disney Pictures (1998). Due to the movie’s success, she starred in “Freaky Friday,” “Mean Girl,” “Get a Clue,” “Life-Size,” and other movies. American actress Kate Rooney Mara was born on February 27, 1983. She is well-known for her television roles, including those of Zoe Barnes, a reporter, in the Netflix political drama “House of Cards,” Shari Rothenberg, a computer analyst, in the Fox suspense series “24,” and Claire Wilson, a teacher, in the FX on Hulu miniseries “A Teacher” (2020). Christina Renée Hendricks, an American actress, and former model was born on May 3, 1975. She has garnered numerous awards for her work on television and on stage. She is most renowned for playing Joan Harris in the critically acclaimed AMC drama series “Mad Men.” She was chosen to be “the sexiest lady in the world” in 2010 by a survey of female Esquire readers. She also won the title of “Best Looking Woman in America.” Cheryl Gates McFadden is an American actress and choreographer who was born on March 2, 1949. She is best recognized for her role as Dr. Beverly Crusher in the television series and four following movies based on “Star Trek: The Next Generation.” American actress Bridget Catherine Regan was born on February 3, 1982. She is well-known for her roles as Rose Solano in “Jane the Virgin,” Rebecca Lowe/Rachel Turner in “White Collar,” and Kahlan Amnell in the television series “Legend of the Seeker.” Scottish actress Karen Sheila Gillan was born on November 28, 1987. She became well-known for her work in British film and television. She gained fame by portraying Jane Lockhart in the romantic comedy movie “Not Another Happy Ending” and Amy Pond in the television series “Doctor Who.”