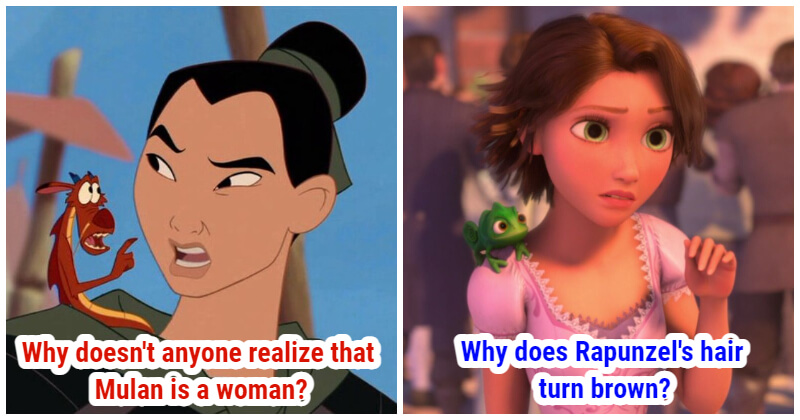 Disney movies are popular. With their empire annexing more studios and companies, like Fox in 2017 and Pixar in 2006, Disney is now becoming an integral part of our childhood.

And justifying so: Disney children’s movies are good, and regarded as masterpieces of our culture.

A lot of Disney movies have won film awards. Some are still spawning memes that go viral today. Some get re-adapted into blockbusting live actions. Some even still binge-watched routinely every weekend by the whole family together.

This is why it is so easy to ignore their flaws. Not artistically – Disney movies always have the highest production quality. Disney’s biggest flaws sometimes lie in its logic.

We might have ignored them as kids, but as adults, we rewatch them and ask: Wait, how did that happen? The plotholes are just too obvious. But just in case you miss them, here are the 16 biggest plotholes in popular Disney movies.

#1 Why Is It Okay For Prey In Zootopia To Fear Predators? It’s okay for prey to perpetuate the stereotypes by fearing the predators.

Prey coexist peacefully with predators in Zootopia’s city, albeit they constitute just 10% of the population. The film’s racial allegory reinforces (correctly) that it is wrong for a majority to fear an oppressed minority, but this message is undermined by the fact that, unlike the unfairly maligned real-world populations they represent, predators are inherently dangerous to the prey that they hunt to survive.

#2 How Does Elsa Get Her Power? Was she born with it? Was she bitten by a radioactive snowflake?

Elsa, who appears to be a typical little girl at the start of the film, possesses magical superpowers. Did she inherit them from a family member? Was she cursed in some way? Was she involved in an accident? It never comes up, and just because the film’s creators purposefully left this open doesn’t mean it’s not a narrative hole.

#3 Why Does No One Notice Mulan Was A Woman? Mulan enlists in the army, a position where her gender should be obvious to anybody with sight. What happens when she goes to the toilet or takes a shower?

#4 Why Does Rapunzel Hair Turn Brown? Her hair should still be sun golden.

At the start of the film, we observe that when Rapunzel cuts her hair, only the parts that leave her scalp to turn brown. The uncut hair should thus remain blonde. She does know how to read and write, in perfect English.

During a Q&A session with Disney artists, a 10-year-old girl questioned it. “‘If Ariel couldn’t tell the Prince who she was because she couldn’t talk, why didn’t she send him a letter?’ The animators exchanged smiles and one of them remarked, ‘Next question.'”

#6 Why Is Ariel Comfortable With Seafood? No matter how lovestruck she is with Eric, Ariel should at least be a little upset when the main course is seafood.

When Ariel lives under the water, she makes friends with fish, and her best buddy is a crab. When crab is offered for dinner, she doesn’t even flinch at the prospect of eating what might be her closest friend.

#7 Why Does Scar Let Simba Live? Scar would have ruled Pride Land miserably ever after had Simba not returned.

Scar is a malevolent, yet extremely intelligent and power-hungry lion. Scar’s natural response after killing Mufasa to seize the kingdom would have been to ensure that the king’s son, and legitimate successor to the throne, does not return when he’s all grown up – large, powerful, and furious – to seize what is properly his. Aladdin wishes to be a prince, but Jafar remains unaffected.

Aladdin wishes to become a prince, and his desire is realized. However, for some reason, Aladdin either forgets or refuses to acknowledge that he has become a prince since he constantly reminds Princess Jasmine that she can only marry a prince. If his request was truly fulfilled, there should be no problem.

#9 Why Doesn’t Charlotte Turn Into A Frog? By the film rules, Charlotte should also be turned into a frog; she kissed Naveen after midnight.

Prince Naveen must kiss a princess in order for him and Tiana to revert to human form. Charlotte, as a temporary princess, fits the criteria – her dad had been crowned King of Mardi Gras. The catch is that Charlotte does not kiss Naveen until after midnight, at which point she is no longer a princess. As a result, Charlotte should have changed into a frog as well.

#10 How Does Pocahontas Speak English So Well? Pocahontas is fluent in many languages, including trees and animals. But certainly not something she never heard before.

According to the film’s facts, Pocahontas’ tribe never encountered any English-speaking individuals and had no idea they existed. She can, however, speak effectively in English with John Smith and his colleagues.

#11 Where Are The Beast’s Parents? If The Beast used to be a prince, where are the King and Queen?

When the Beast is just 11 years old, a witch curses him for being selfish. The film makes no mention of his parents or who reared him. Did they perish? Have they left town? We’ll never know. Everything else got turned back when midnight comes.

The clock strikes twelve o’clock. Cinderella’s time with the Prince at the Royal Ball has come to an end. Cinderella’s garment becomes rags when her fairy godmother’s charm wears off. Her glass slippers, on the other hand, are in perfect shape. Shouldn’t they have also changed? They work in a jewel mine after all.

Shouldn’t Doc be decked up in bling? Alternatively, the seven dwarves should be able to upgrade from their cramped quarters. The dwarfs dig valuable gems. What happens to the jewels? How are the dwarfs repaid? We’ll never know. Source: One Hundred and One Dalmatians / Buena Vista Distribution

Dog-keeping is an impossible job for two people with so many dogs.

Anita and Roger’s determination to safeguard all 101 of their new puppies drives the primary conflict in 101 Dalmatians. Even for a Disney film, it’s difficult to believe that Roger and Anita could actually care for so many pups unless they were exceedingly rich and had a large amount of property.

#15 Why Doesn’t Hades Make Sure Hercules Is Dead? As God of the Underworld, Hades should be aware that Hercules is not dead.

Hades, for such a great lord, does not care to look behind him. Panic and Pain inform the Lord of the Underworld that they have slain Hercules. One would imagine that Hades (who oversees the Underworld) would check with the dead to confirm that knowledge. He doesn’t until nearly two decades later. Compared to her minions, Diablo is way more capable.

Maleficent believes that finding Aurora is critical. Nonetheless, she dispatches a slew of inept lackeys. Finally, Maleficent, who appears to be rather cunning and astute, dispatches Diablo, who easily locates Aurora.