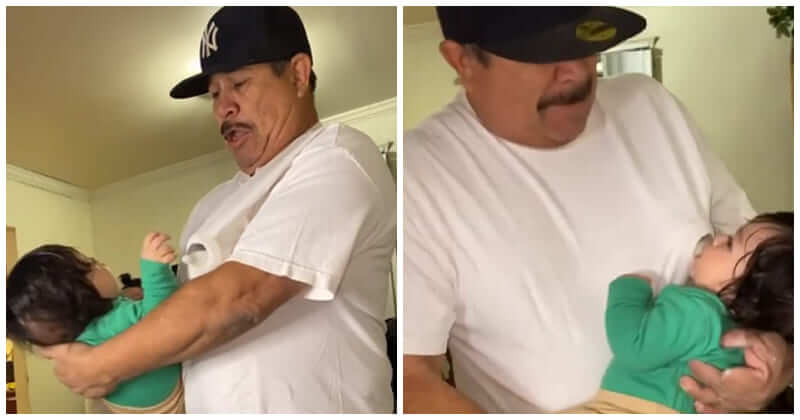 It can be very stressful for parents when their baby has a hard time taking a bottle. Because babies can’t communicate clearly, parents are left wondering and guessing why their baby won’t take a bottle. There are a variety of reasons why babies refuse to drink out of the bottle. They aren’t hungry enough to want to be fed. They are being held in an uncomfortable position. They don’t like the taste, temperature, or texture of the milk. Or they basically want to continue breastfeeding.

At the weaning age, it’s quite difficult for parents to continue breastfeeding because they have to return to work. They can’t stay with their kids 24/7 like before. Therefore, moms and dads try many ways to make their kids take a bottle, but it’s still challenging. However, the trick that the clever man below used has been praised by many parents because it actually works. Scroll down to check out his brilliant solution.

Baby not liking milk from a bottle? Well, this grandad has a trick for you! Wendy Rangel posted a now-viral video showing her father putting a baby bottle through a hole in his shirt on TikTok, with the bottle’s transparent nipple protruding. He placed it gently on his chest, tapping around it to make sure it was secured so it wouldn’t move or fall.

The caption read: “My godson won’t take the bottle so my dad tried something” while Wendy laughed at the sight in the background as he bent down to test if the milk would flow through.

In a now-viral TikTok video, a clever man can be seen hiding a baby bottle beneath his shirt to mimic a mother’s breast. The man decided to do the real test. He holds the child in his arms, carefully positioning the youngster to sip the milk and doing his best to prevent any spills on the floor.

The infant boy finds the nipple and latches on automatically, whether it belongs to his mother or grandfather, despite the kid’s first expression of confusion, as if to ask, “What the heck is happening?”

While her happy dad rocks up and down with the baby happily slurping milk, Wendy is inconsolable, her laughter echoing across the room.

He is obviously quite pleased with his creation, as you can see The clip concludes with a close-up of the hole, showing the man’s own nipple jutting out, and a damp patch on the T-shirt revealing the milk that was still inside. He then massages around it while moaning as if to indicate that he is sore from the effort he just expended.

The video was first published at the end of 2020, and since then it has received an incredible 8.8M views and nearly 2M likes. “To all the dads out there who struggle with their little ones not taking the bottle,” was the dedication.

He picks up his grandson and carefully places the infant in its position, taking care not to spill any milk The nipple on the bottle mimics the mother’s, and the milk frequently comes from the mother herself, so you’d assume it’s the same thing; hence, the flavor should be comparable—certainly more similar than the formula! Most parents constantly ask themselves “why?!” This is wonderful news since it implies you’re not alone and there must be a solution out there.

And it’s a triumph! The pleased grandfather encourages the infant to latch on by swaying back and forth The shirt is a casualty in the situation, but as long as the baby is fed and calm, that’s a worthy sacrifice Baby Kenny was born June 2, 2020 and his godmother and grandpa have fallen head over heels for him If the baby continuously refuses to take a bottle, they might lack nutrition and then lose weight quickly.

The little baby is truly a precious gift to the family. Babies frequently dislike being bottle-fed for a variety of reasons. Finally, take your time. Although babies often pick things up fast, learning may be a peculiar process that calls for a lot of patience and calm. Even after listing all these causes and fixes, there are still a ton more that are available that will work best for your child.

The secret is to remain calm, study the youngster, determine why the issue repeats, and, most importantly, don’t panic Grandad has become the master of the bottle and we wish the best for Kenny and his family! Even though they are cute, babies may be annoying when they refuse to cooperate with what is best for them. And yes, occasionally cutting a hole in your shirt and faking it could be your only option!

The grandfather seemed to have mastered the bottle. But I don’t want to read any remarks on this photo claiming that the youngster is learning bad habits, that kids shouldn’t be around alcohol, etc. The child is in good health. That bottle contains nothing. He’s just spending time with his grandfather and enjoying every minute of it.

People have shared their own experiences, sending praise to the grandpa. Post your ideas in the comments section below! 15 People Who Know The True Meaning of Being Unlucky

20+ Mind-Bending Photos That Seem Fake But Are Actually Real

20 Honest Tweets About Money That Are Worth The Read

11 Funny Parenting Incidents That Are Just Too Funny

18 People Who Took Creativity To The Next Level

This Graphic Designer Redesigned The 9 Worst Logos Ever, And The Final Results Are Awesome

18 Annoying Things That Can Drive The Calmest People Crazy