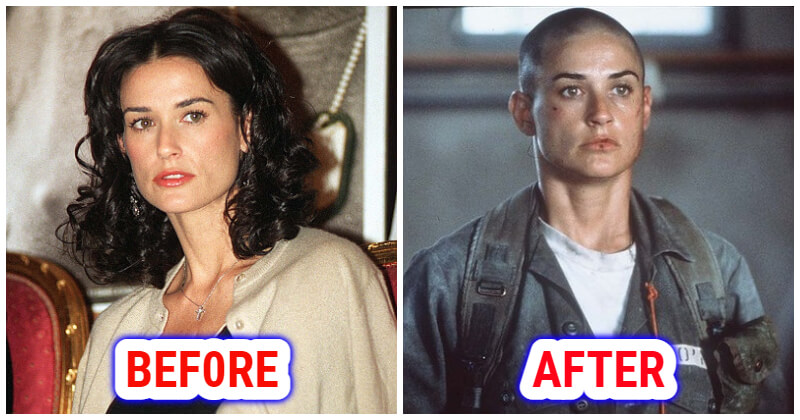 How difficult can acting be? Many of us have certainly seen ourselves as budding stars who, with a little bit of luck and some help with memorizing the lines, could play the role of a protagonist fairly easily. However, most actors would consider it a profession that requires extraordinary levels of talent and commitment. It involves much more than just adopting a different persona to say a few lines here and there while donning some makeup or possibly a false mustache.

Actors are acutely aware that to truly embody a character, one must go far further than merely donning a wig or some makeup. Many make shocking weight or muscular gains or losses in order to fulfill their artistic vision.

Would you consent to severe weight gain at the expense of your appearance? Or to continue dieting for months in order to lose weight properly? Or, in certain circumstances, to put up with a painful muscle-building regimen that calls for spending six hours a day in the gym? Many talented and renowned actors have achieved their current standings by going through such extremes. Let’s see who they are and their transformation in this article. Natalie Portman’s Oscar-winning performance in the psychological horror movie Black Swan as the dedicated ballerina Nina demonstrated the lengths she was willing to go for her career. The already-slender Portman lost 20 pounds from her small 5’3″ frame by following a strict diet and exercising for eight hours every day. Mary Helen Bowers, a former professional ballerina, was the instructor for the actress. She had a demanding training program and also dislocated a rib during practices, but she persisted. Renee Zellweger had to increase her clothing size from a size 6 to a size 14 in order to fit the part of the titular hopeless romantic in Bridget Jones’s Diary. When Zellweger was informed she was too skinny to play the brave lead, she put on 20 pounds, picked up an accent, and started smoking herbal cigarettes. The actress’s diet for the first movie included doughnuts and pizza, but it made her feel terrible. Instead, Zellweger worked with a dietician to gain weight healthily in order to get ready for the two sequels. Jared Leto, an actor and singer, has gained and lost weight for several of his films, so he is no stranger to totally embracing a role. But he went to extremely extraordinary measures to play John Lennon’s killer Mark David Chapman in Chapter 27. Leto added 67 pounds to his typically slim body in order to more closely resemble Chapman’s muscular build. He achieved this by consuming quarts of ice cream that had been microwaved and blended with soy sauce and olive oil! Leto developed gout as a result of his weight rise’s abruptness, and the strain from this quick weight gain even forced him to use a wheelchair. Source: Gossip On This

When he played a football player with cancer in the movie All Things Fall Apart, the well-known Queens rapper 50 Cent lost approximately 60 pounds from his typically strong body. The musician-turned-actor modeled his persona on a childhood buddy who passed away from cancer because he wanted to reflect the disease’s affects on the body as precisely as possible. He lost weight, dropping from 214 pounds at the beginning to a weak 160. The startling physical change was ascribed to a liquid diet and frequent treadmill use. McConaughey reduced his weight by 47 pounds, from 183 to 136, for his part as Woodroof. At order to get paler and stop socializing, he reportedly spent six months indoors in his Texas house. He also apparently stopped going out. Even though Demi Moore’s physical makeover for G.I. Jane may not be as surprising as the others on our list, it generated a lot of discussion at the time. Moore put a lot of effort into changing into Lieutenant Jordan O’Neil, the first female Navy SEAL. The actress got up at 4 a.m. to finish her daily strength and fitness training before filming started, and she trained with a genuine Navy SEAL. In the 2004 film The Machinist, Christian Bale plays the part of Trevor Reznik, a machinist who suffers from chronic sleeplessness that causes him to lose a lot of weight. Bale had to go in a rigorous weight loss regimen in order to assume the role. He went from weighing 173 pounds to an astonishing 110 pounds, a staggering loss of 63 pounds for the part. For four months, he maintained an extreme diet, simply consuming an apple and a can of tuna fish each day.

#8 Chris Pratt, Guardians of the Galaxy Chris Pratt, a comedian, lost 60 pounds in six months to prepare for his part as the wry outcast Star-Lord in Marvel’s Guardians of the Galaxy. The actor claimed that “Three or four hours a day of just consistent, ass-kicking hard work.” was all it took for him to accomplish this goal. Pratt gained fame for portraying the endearingly dim-witted Andy Dwyer on the sitcom Parks & Recreation before being chosen to assume the main role. His weight changed a lot between the parts he played; for Delivery Man, he put on weight, and for Zero Dark Thirty and Guardians, he dropped it. Bobby Sands, a teenage prisoner who led the second Provisional Irish Republican Army hunger strike in 1981 and finally passed away after 66 days without food, was represented by Michael Fassbender in the movie Hunger. Fassbender embarked on his own fast in preparation for the part, burning 42 pounds while adhering to a 900-calorie diet and engaging in physical activity. The actor saw a dietician, lost weight as safely as he could, and had regular checkups with the doctor. As the real-life serial murderer Aileen Wuornos, Charlize Theron showed viewers that she was much more than just a lovely face. For the job, the actress put on 30 pounds by subsisting mostly on doughnuts and potato chips. Theron gained the weight in an effort to mimic Wuornos’ way of life and physique in general. She not only changed her figure, but she also had her hair “fried” and thinned, her eyebrows entirely removed, and she wore dentures. Jake Gyllenhaal plays Louis Bloom, a stringer who captures violent incidents at night in Los Angeles and sells the material to a television news channel, in the 2014 thriller Nightcrawler. The actor made the decision to lose close to 30 pounds before signing on for the film in order to completely embody his sinister paparazzo persona. He entirely changed his diet to consist only of kale salad and gum in order to shed the weight. Additionally, he ran 15 kilometers every day between his house and the shooting location. In order to depict the desperate mother-turned-prostitute Fantine in the 2012 musical Les Miserables, Anne Hathaway entirely cut off her dark hair and lost 25 pounds. Hugh Jackman, a fellow cast member, also suffered a significant weight loss, and the two actors frequently confided in one another throughout the process. Hathaway got the Academy Award for Best Actress in a Supporting Role for her portrayal of Fantine, thus the effort was well worth it. Chris Hemsworth put on 20 pounds of muscle to get the part of the hammer-wielding, golden-haired Norse god Thor in the Marvel movie. The actor began working out with trainer and ex-Navy SEAL Duffy Gaever, who chose to use an old-school bodybuilding method, in order to change his lean physique. Gaever praised Hemsworth’s remarkable transformation, “Just red meat, hefty objects, and some protein powder were used. He dominated each and every workout. He simply chose to dress up like Thor.”