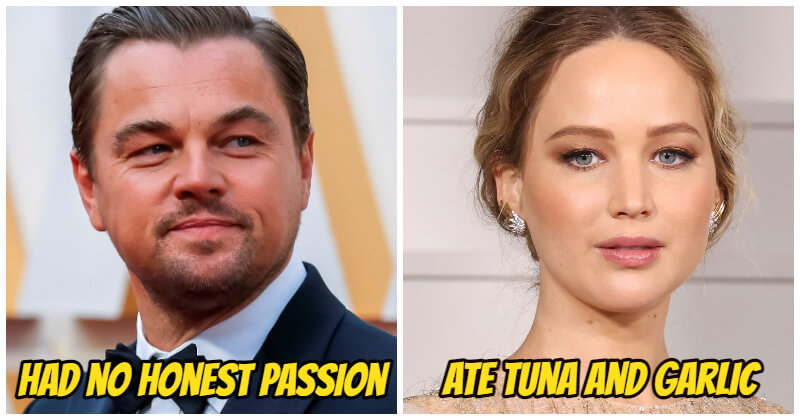 Celebrities, who rose to their stardom with brilliant movies, never let us down when they perform their competence on-screen. Undoubtedly, these actors never mind showing off their acting skills to the audience, which they have used to bring their characters to life.

However, some actors and actresses admitted that they are not good kissers. They truly surprise the audience because kissing isn’t supposed to be so hard. But these scenes have challenged a lot of actors. From Jennifer Lawrence to Robert Pattinson, they all have failed in several kissing scenes. We know that there were many uncomfortable and sloppy behind multiple romantic scenes as we couldn’t expect.

Here are 14 celebrities known as terrible kissers. Let’s scroll down and check them out! The Big Little Lies star, Reese Witherspoon, said that, during filming for 2011’s Water for Elephants, Pattinson proved that he became less sexy when being in kissing scenes. The actress revealed, “He was snorting and snotting through every second of it – and it was not appealing.” JLaw’s Hunger Games co-stars Liam Hemsworth and Josh Hutcherson claimed that the actress ingested copious amounts of tuna and garlicky foods before locking lips with them. After that, she’d be like, ‘Yeah, I ate tuna,’ or ‘I had garlic, and I didn’t brush my teeth.’ And I’d be like, ‘Fantastic; I can’t wait to get in there and taste it!” Harry Potter star Daniel Radcliffe’s experienced his kiss with Emma Watson while filming the franchise. “I was ambushed! It was full on,” he told Marie Claire. “I always thought it would be this soft, sensual moment and this passionate kissing happening to me. She is a bit of an animal.” Thandie Newton let us know all the experiences when kissing one of the sexiest men in the world. “Kissing Tom Cruise was slightly icky and sort of wet,” Newton recalls her time on the Mission: Impossible II set. “I’d really go home at the end of the day moan about… how many times we had to do it.” James McAvoy admitted to Today while filming the 2008 thriller Wanted with Angelina Jolie, “I can tell you what it was like to kiss her on a film set. It was awkward, sweaty, and not very nice.” Bradley Cooper and frequent co-star Jennifer Lawrence first locked lips on the set of Silver Linings Playbook, at which time JLaw didn’t hide her disappointment. “After the second take, she [Lawrence] said, ‘You’re a wet kisser.’ You don’t want to hear that. It was not a compliment,” Cooper revealed in an interview. Virginie Ledoyen revealed her kiss with Leo on The Beach: “There was no honest passion. No real sensitivity in our love scenes. I can’t remember his kiss.” During the filming of the 90210 reboots, AnnaLynne McCord revealed to HollywoodLife that co-star Matt Lanter was a horrible smooch. “You know, he is a terrible kisser, so it kind of sucks,” she claimed. The actor admitted he fumbled with the kiss due to nerves. “I never look back at that scene,” he revealed. “I’ve known Emma since she was nine, and we had this very brother-sister relationship.”

Even Watson admits she thought too much in that scene,  “I was like, “Do I use tongue?” “Do I not use tongue? Do I cover my teeth? What do I do? Do I go first? Oh my God!” I was so desperate to get it over. After the first take, he was like, “Whoa, there! Where did that come from?”’ I was like, ’Sorry!’” Although the Oscar winner Helen Mirren considered Harrison Ford “the nicest, sweetest guy you could want to meet,” she wasn’t a massive fan of the whole kissing business during the 1986’s The Mosquito Coast shooting. “He can’t kiss,” she said. “He’s probably not very good off-screen either.” That wasn’t good! Her co-star Depp voiced his misery to TMZ, “Any kind of scene like that, whenever you’re doing that sort of thing, it’s always unbelievably awkward, especially having [first] met Keira when she was 17,” he revealed. The weirdness in the scene was watching it without cringing. During the movie Forces of Nature filming, Ben Affleck revealed a handful of onscreen kisses with his co-star Sandra Bullock. Bullock was less than enamored of the interaction. The Good Will Hunting star’s breath was so terrible that Bullock offered him to take a rest. The former co-star, Zoey Deutch, had one word to describe her on-screen kiss with Franco in 2016’s Why Him? “Meh,” she responded to Andy Cohen’s question on Watch What Happens Live. You should avoid spicy, garlicky, and oniony foods if you plan to kiss someone. But Kate Hudson didn’t remember that critical note that former co-star Dane Cook roasted the actress chatting with Andy Cohen on his Watch What Happens Live series. “I did a movie with her, My Best Friend’s Girl, and I think she (may have) purposely ate just like a feast of onions before our scene.”

Will Bumblebee 2 Return To Theater? | Aubtu.biz