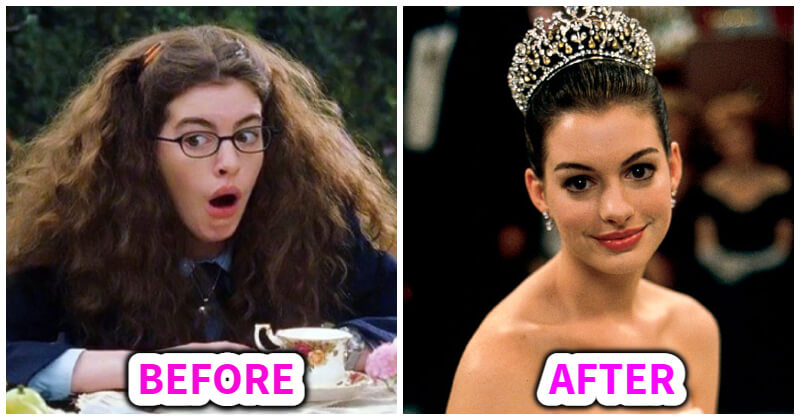 The makeover is a classic element of modern film culture. There are many feature films that have undergone this motif such as “Maid in Manhattan” and “The Princess Diaries“. However, the idea of changing a character’s appearance to improve her status has caused controversy. Some have even been criticized for being body shaming and anti-feminist.

Despite these issues, the makeover really created a positive vibe. Watching a character emerge from her cocoon like a butterfly, frequently with a fresh spirit for living is enjoyable. Some movies have even achieved an all-timer status for outstanding makeovers, boosting them to the level of masterpieces.

Below are our selections for the 13 most significant and unforgettable, iconic movie makeovers. Meryl Streep, who played Miranda Priestly, said to Anne Hathaway on the first day of shooting, “I believe you are perfect for the position. I’m glad that we will be working together.” “That’s the last nice thing I’ll say to you,” she said after pausing. Lindsay Lohan was originally selected to play Regina George; however, she finally chose to play Cady, the “good girl,” in order to distance herself from Regina’s character in the public’s eyes. The metamorphosis of Cinderella’s torn attire into the sparkling blue ball gown was said to be one of Walt Disney’s favorite animations. When Audrey Hepburn first realized that she’d have to be dubbed because her voice wasn’t powerful enough, she walked out. The following day, she reappeared and apologized to everyone for her “wicked behavior” in classic Audrey Hepburn style. In the movie’s opening premiere, Sandra Bullock stumbled and fell by accident when she got out of the car, exactly like her Miss Congeniality character usually did. Bullock was just careless, but the audience actually believed that she had arranged the trip. Drew Barrymore and her production business, Flower Films, made their debut movie with Never Been Kissed. The name Laney Boggs given to Rachel Leigh Cook’s character is a combination of two roles played by Winona Ryder: Lelaina “Laney” Pierce in Reality Bites and Kim Boggs in Edward Scissorhands. This is a nod to the physical resemblance between Ryder and Cook. Maid in Manhattan is based mostly on a true story. Steven Rockefeller, the son of Nelson Rockefeller, the governor of New York, wed Anne-Marie Rasmussen in 1959. She is a maid who had worked at the Manhattan hotel where his family owned and operated. To make her hair appear bushier, Anne Hathaway had to wear a big clip-in hairpiece. Cast and crew referred to the hairpiece as “the beast.” It took an hour to install her pre-makeover eyebrows, and each tiny hair was meticulously glued on. Olivia Newton John’s tight black pants from the final scene (the carnival at Rydell) had to be stitched into her due to a zipper breaking. There are 53 different types of tartan or plaid utilized in the movie, seven of which Cher and 12 other major characters wear. Nia Vardalos, the film’s main actress, wrote My Big Fat Greek Wedding, which she also staged and starred in as a one-woman stage play. There was a lot of detergent in the bathtub to make many thick bubbles in the scene where Vivian is singing. The red dye in Julia Roberts’ hair was washed off by the detergent because it was so intense. Later that night, she had to have her hair redyed.

17 Pairs of Pictures, Taken On The Same Day, Showing That Instagram’s Photos Can Be Far From Reality

5 Most Famous Celebrities Who Died In 2022