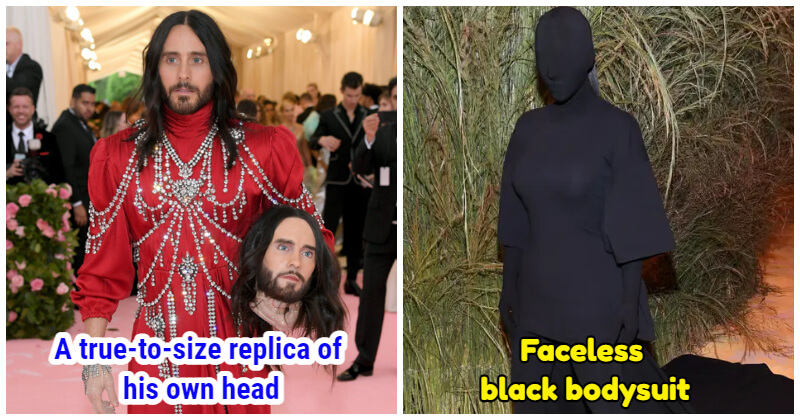 Fashion is very extreme. It is either head-turning or gobsmacking; it’s one spectrum or another, and never in-between.

And there’s no place where this is more evident than one of the biggest red carpet events of the year -the MET Gala.

The Met Gala, or Met Ball, is an annual fundraising gala held in New York City to benefit the Costume Institute of the Metropolitan Museum of Art. It is widely recognized as the most prominent fashion event in the world.

Hosted by Vogue on the first Monday of May each year, celebrities from many professional areas are invited. This means we get to see some celebrities in hilarious outfits or gowns. And here are the 14 biggest 14 misfired fashion statements in met gala history that leaves us confused.

#1 Kim Kardashian broke the Internet in 2021 with her meme-worthy all-black, faceless ensemble. Kim Kardashian wore a faceless all-black Balenciaga short mini dress with a long train and leggings that stretched into high boots in what became the most talked-about Met Gala wardrobe of 2021, and probably ever. Kardashian could only be identified by her silhouette.

#2 Rihanna donned a yellow dress with fur trim and a spectacular circular trail during the 2015 gala, which became a meme. Rihanna wore a yellow-and-gold Guo Pei Chinese couture gown-coat hybrid with fur detailing to match the 2015 theme. According to Vogue, the circular trail on her dress sparked a surge of memes, including an omelet cooking in a skillet.

#3 Jared Leto attended the 2019 Met Gala with a life-size facsimile of his skull. In keeping with the “Camp: Notes On Fashion” theme, Jared Leto wore red Gucci robes with puff sleeves and cascading silver embellishments to the 2019 gala. He also donned transparent gloves and carried what seemed to be a severed copy of his skull. #5 Sarah Jessica Parker was chastised for her culturally insensitive “China: Through The Looking Glass” costume in 2015. Sarah Jessica Parker was chastised for her racist impersonation of the “Asian Dragon Lady” stereotype while wearing a bespoke H&M black asymmetrical gown with one long sleeve, a thigh-high slit, and a floor-length skirt with a tiny train.

#6 Lady Gaga inadvertently stepped on Kate Hudson’s gown at the 2016 Met Gala, and the two had an awkward meeting. Husdon chose a futuristic white gown with a sweetheart neckline and a mesh train evocative of bridalwear. Meanwhile, Gaga was dressed in a Versace sequin leotard and a jacket embroidered to look like an electric circuit board, along with fishnet stockings and 10-inch heels, which caused her to step on Hudson’s frock.

#7 John Galliano walks the Met Gala red carpet with Charlize Theron in an… outfit in 2006. The British fashion designer walked the red carpet with Charlize Theron at the 2006 Met Gala, “AngloMania: Tradition and Transgression in British Fashion.” Galliano accessorized with a red-and-white polka dot waistcoat, sequined blue trousers, a black coat with an embroidered hem, animal-skin cowboy boots, and a hat atop permed hair. Rita Ora wowed on the red carpet at the 2014 Met Gala, wearing a nude, embroidered Donna Karan gown with Lorraine Schwartz jewels and gold wrap-around gladiator shoes, according to Cosmopolitan. According to Mail Online, Ora’s dress rode up due to the gown’s high slit and she had to correct herself on the red carpet.

#9 Jaden Smith wore his braids from a prior haircut to the 2017 Met Gala. Jaden Smith had an unexpected red-carpet moment at the 2017 Met Gala when he wore an all-black Louis Vuitton look and carried locks of his hair that had been cut off earlier that year for his role in “Life in a Year.” Smith said he was aiming for a “Dracula look” when he wore a black T-shirt tucked into skinny pants with a long trench coat and leather boots.

#10 Kylie Jenner’s “Heavenly Bodies” costume in 2018 only had a zipper because her dress was torn that day. Jenner wore an Alexander Wang mini dress with a stomach cut-out, a high back, and a train to the 2018 “Heavenly Bodies: Fashion and the Catholic Imagination” gala. She paired black and transparent shoes with sunglasses and tights with the designer’s name written in silver up her calf.

#11 Hillary Clinton wore a leopard-print gown and a golden shawl in 2001. Senator Hillary Clinton was among the A-list guests at the “Jacqueline Kennedy: The White House Years” event in 2001. Her sleeveless gold leopard-print taffeta gown was paired with a crinkled golden shawl. Clinton paired her gown with a hefty gold chain necklace and bracelet, as well as vivid red lipstick.

#12 Kirsten Dunst wore a bright blue beanie cap to the goddess-themed event in 2003. Dunst was spotted on the 2003 Met Gala red carpet wearing a black sleeveless midi dress by Marc Jacobs. She accessorized with a stacked silver gemstone necklace, a wrist cuff, a little black clutch purse, and a mismatched blue beanie cap.

#13 Kim Petras transformed into a real-life horse girl at the 2021 Met Gala, wearing an outfit with an orange horse head and a true-to-life ponytail. Kim Petras, a real-life horse girl, attended the 2021 Met Gala, the first of two events with the subject “In America: A Lexicon of Fashion.” According to Vogue, the pop diva walked the red carpet in a pale-blue Collina Strada gown with a vibrant flowery design and expanded hips, complete with a 3D horse-head bustier.

#14 Helen Lasichanh’s red costume at the 2017 Met Gala was compared to a lobster and a gummy bear. Lasichanh donned a crimson Comme des Garçons ensemble to the event, which was themed “Rei Kawakubo/Comme des Garçons: Art of the In-Between.” She accessorized her structured bright-red jumpsuit, which featured a broader profile at the shoulders and hips, with black open-toe flats and a top knot on her hair.