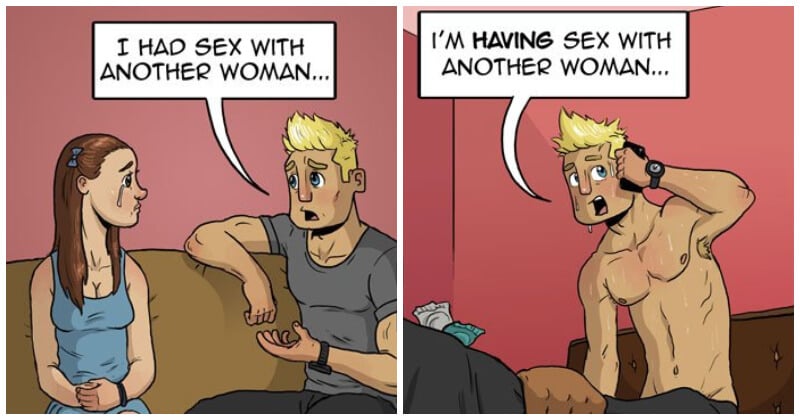 Have you ever been in embarrassing situations made up by someone you trust or are acquainted with? They can be anyone, from your friends and relatives to your families and neighbors. Certainly! Some of you may find out whether they accidentally or intentionally embarrass you, some may not. This points out the major difference in how you react and deal with such forgettable moments.

For those who find it easy to be aware of their problems, they may choose to “take revenge” on people who make them feel awkward in a clever way. Along with them are the ones taking their problems seriously yet doing nothing but laugh. The reasons behind this are simple. It is mainly because they expect to leave no bad impressions on others as well as not to go any further. What really matters are such flat jokes are spitted out at the wrong time. We can tell by reacting to our problems but in comics. No dare to play around! Isn’t it a good idea in case some of you cannot stand such “brutal” truths in life?

Let’s join CollegeHumor to explore extremely embarrassing stories and see how related they are to ours!

CollegeHumor is an Internet comedy company based in Los Angeles, majoring in creating YouTube content. It was launched in 1999 and has been owned by Sam Reich, an American producer. It features daily humor and user-submitted videos, pictures, articles and links about comedians. In 2014, it was listed on New Media Rockstars Top 100 Channels at the number of 76. Its outstanding series are many such as “Dimension 20” (a tabletop role-playing game show), TV RPG (an animated parody of popular TV series), Prank War (pranks played between former CH staff and Amir Blumenfeld), etc.

The five comics below are about random characters facing deeply mean friends and dishonest lovers. They were made by an anonymous artist using the brand name CollegeHumor as his works’ producer. Try reading them to see how they get on your nerves! Exactly! You may feel really bad for the girl whose boyfriend turned out to be an “all-powerful” cheater, who literally cheated on whoever he slept with. Or for the ones who were mocked right after getting compliments by their over-honest friends. A pure question of a son, “What happens when you die?” was even turned into an endless “decomposition” lesson by his father. What embarrassing situations! Let A Penguin, A Bird, And A Chick Tell You Wholesome Stories In 25 Adorable Comics

Motherhood Is Not All Rainbows, Butterflies And Cute Photos, Illustrated By A Norwegian Mom And Artist

15+ Hilarious Comics With Unexpected Endings, As Illustrated By Oscar Samdi

Talented Artist Draws 30 Pictures That Totally Sum Up Modern Life Issues, And You May Need Time To Understand Them