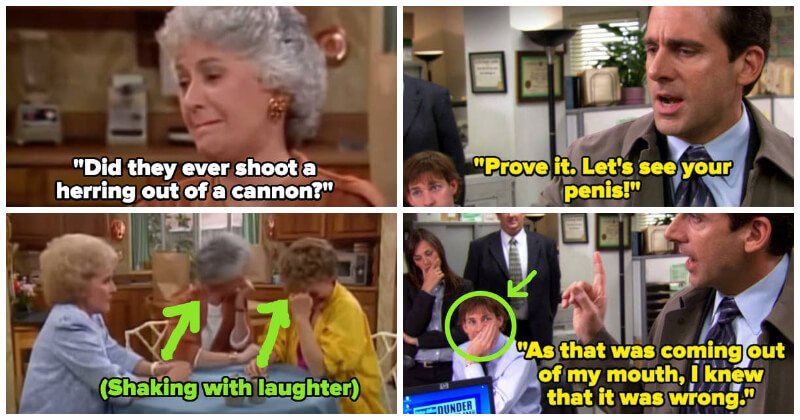 In acting, staying in character is considered a sign of professionalism. But sometimes, some things are so funny that it makes the actors break into hysterical laughter.

Relax, it doesn’t mean the actor is unprofessional. Instead, it is a sign of a comedy scene done right!

This is especially common in comedy. Whether it is a hilarious line or physical comedy at its peak, some scenes are just so funny for the actor not to break. Most of these moments are called bloopers, but some make it on screen.

Usually, producers decided against cutting out these moments if they aren’t affecting the scenes in general. However, if you have eagle eyes, or are just re-watching the same episodes once too many times, these moments become more evident.

#1 The Golden Girls: The “herring war” When Betty White recounted the “herring war” on The Golden Girls, Rue McClanahan and Bea Arthur couldn’t stop giggling. While Dorothy and Blanche’s laughing is written into the screenplay, the extent to which Bea appears to be fighting her laughter and Rue is completely losing it appears to be the performers breaking character. Murderville had plenty of people breaking character and laughing when Kumail Nanjiani started squawking and Will Arnett almost lost it.

Murderville, being an improv comedy, saw many guests breaking character and laughing. But it was unusual to see Will Arnett, the primary character in every episode, do the same, which is why Kumail almost got a chuckle out of him. When the Eagleton residents revealed their bogus park plan, Leslie warned them to go in a demonic voice while Adam Scott battled to keep a straight face. The camera pans in on Leslie, and you nearly miss Adam tightening his mouth to stop himself from laughing — but not quite.

#4 Parks and Recreation: The calzones betray me. On Parks and Recreation, when Adam Scott tried to call a phone with his face amid the whole “the calzones betrayed me” food poisoning sequence, Rob Lowe couldn’t stop laughing. You may mistake his expression for one of anguish, but it’s evident in the video that he’s laughing.

#5 Arrested Development: Your wife is dead When Tobias declared Michael was no authority on marriage because his wife had died, you could tell Jason Bateman was trying incredibly hard not to laugh. On The Office, when Michael accused Toby of being the man who flashed Phyllis and requested him to display his penis, a very awkward quiet ensued, with John Krasinski nearly losing it: Also on The Office, when Kevin climbed on Michael’s knee dressed as Santa and Mindy Kaling burst out laughing: When Idris Elba was struggling to hold back his laughter when characters kept interrupting David Wallace on The Office.

#9 Will and Grace – Lady of quality When they were filming a live episode of Will and Grace, Debra Messing and Sean Hayes couldn’t stop giggling when talking about Jack being a “lady of quality”: When Jack breaks while showing Grace his missing brow. On Seinfeld, towards the end of “The Parking Garage,” when the car wouldn’t start (which wasn’t in the script) and George was shaking with laughter During the “Traffic School Daze” episode of The Jamie Foxx Show, Mark Curry (playing the teacher) slipped and almost stumbled as he sprinted toward the front of the class, and a number of the actors started laughing: When Curry slipped on his way in and declared, “If one of you laughs, you ain’t going to graduate,” Foxx and another actor were visibly laughing.

#14 Live in Front of a Studio Audience – Fumbled lines When Jamie Foxx fumbled his lines and made the entire cast laugh on Live in Front of a Studio Audience: When Bela stole from Dean and Sam again on Supernatural, Dean exclaimed “SON OF A BITCH!” while Jared Padalecki tried not to laugh: When the Dean apologized for payday being pushed back with a rap that goes pretty heated and then hurried out of the room on Community, Gillian Jacobs nearly laughed: In the pillow vs. blanket fight episode, Danny Pudi was seen truly smiling (something his character does not do): When Ross played the bagpipes and Phoebe began singing on Friends, Jennifer Aniston couldn’t keep it together. Ross on the keyboards is also character-breaking. When Eric envisioned everyone in a Three Stooges-style comedy and Ashton Kutcher continued smiling on That ’70s Show: When Kelso claimed to have seen a UFO: Mila Kunis’s meltdown at Kitty dancing at the strip club in ’70s Show: