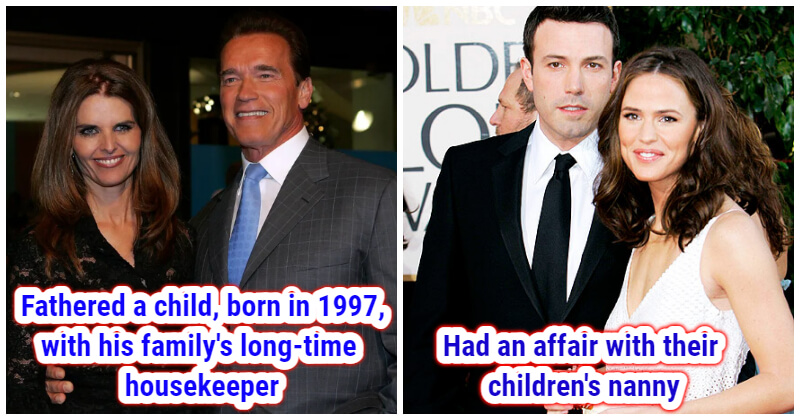 Everyone wants to be famous. Money, luxurious homes, and the opportunity to travel to the most glamorous spots on the planet… sounds awesome, doesn’t it? We can have all of it once we’re famous. Just imagine one day you can enjoy the celebrity treatment, like making reservations whenever and wherever you want, getting tickets to the trendiest events, and having access to a directory of all the other famous individuals around the globe!!

However, having luxurious lifestyles doesn’t mean there’s no pain in the lives of these stars. Even celebrities get hurt by their lovers, and yes, this includes the typical breakup. In these circumstances, the tragedy is most likely the result of double stardom, which is quite usual among big stars. What’s even uglier is when they’re caught up in an infidelity scandal. Due to their fame, bad things tend to become worse very quickly in the eye of the public.

Many Hollywood controversies are founded on rumors and secondhand knowledge, so when a star verifies a detail of their relationship, it’s usually a huge deal. And it’s much worse if it includes cheating.

Here are 9 of the most famous cheating scandals of renowned stars. Everyone was surprised when Arnold Schwarzenegger and Maria Shriver announced their divorce in 2011, after 25 years of marriage. The public was shocked later when it was revealed that Schwarzenegger was the father of a son born in 1997 and mothered by the couple’s housekeeper at the time. Kevin Hart’s story of adultery is a little more difficult than getting caught with the nanny or revealed on Instagram—he was being extorted. He apologized to his wife Eniko Parrish and his children on Instagram in 2017 after denying any misconduct. It was then discovered that someone had a sexually graphic video of Hart and was attempting to extort money from him. Hart and Parrish remained together, and he discussed it on a podcast in 2020. Unfortunately, this cheating tale has been one of the longest in contemporary history. Tristan Thompson has publicly cheated on Khloé Kardashian on multiple occasions after being discovered cheating on her just days before the birth of their daughter, True, and has even fathered a kid in the process. You probably think of this one when you think of a cheating scandal. Tiger Woods was at the center of one of the most explosive and notorious cheating scandals of the early 2000s. On Thanksgiving Day 2009, his chronic infidelity became public knowledge. While the world is obsessed with Bennifer (the other one), let us not forget that Ben Affleck was once caught cheating on Jennifer Garner, the mother of his children and marriage of ten years, with the nanny. In 2018, the couple divorced. Infidelity caused the dissolution of one of Hollywood’s hottest couples at the time. In the midst of their still-new engagement, it was revealed that Jude Law had an affair with—you guessed it—the nanny. When the nanny’s journal was exposed to the public in 2005, the affair was uncovered. The couple was together on and off until they finally split up in 2011. When Beyoncé released Lemonade, it was evident that the couple’s marriage had suffered from infidelity. Although the visual album had visual and musical hints of extramarital affairs, it wasn’t totally obvious until Jay-Z released 4:44, in which he apologizes to both Beyoncé and his daughter, Blue. Many in the Beehive believe that “Becky with the lovely hair” was referring to fashion designer Rachel Roy after months of internet sleuthing. When Kristen Stewart and Robert Pattinson met on the set of Twilight, they soon fell in love. When paparazzi images emerged of Stewart engaging in some heavy-duty PDA with film director Rupert Sanders, their idyllic romance came to an end. The photographs were all over the internet—even Donald Trump had something to say about it—and Stewart was obliged to publicly apologize to Pattinson. Unfortunately, the two had to finish the press tour for their film Twilight: Breaking Dawn—Part 2 soon after. Although this controversy was shown to be false (thank GOD), it resulted in one of the internet’s wildest 24 hours. A$AP Rocky allegedly cheated on Rihanna, who is about to give birth to their first child, with her friend, shoe designer Amina Muaddi. The charges have been rejected by sources close to the marriage as well as Muaddi herself, and the person who began the story has publicly apologized.