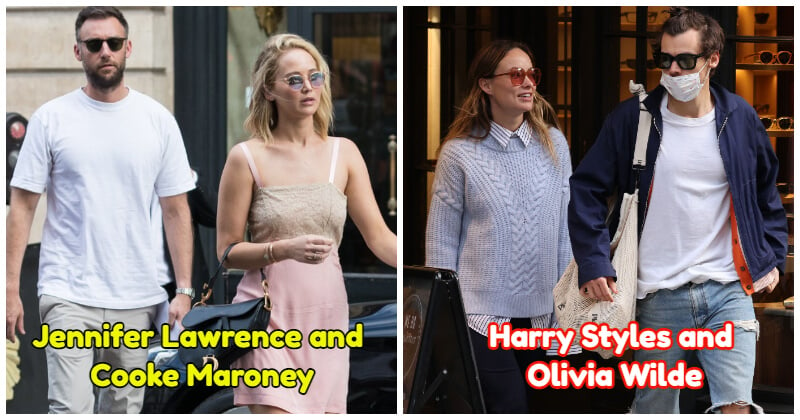 Two types of relationships exist in Hollywood. There are individuals who joyfully display their love for each other on social media, on the red carpet, and everywhere they can, like Chrissy Teigen and John Legend, Nicole Kidman and Keith Urban, and Jennifer Lopez and Ben Affleck.

Then, there’s the polar opposite. We are talking about some famous couples that go against the trend of most famous couples, preferring to keep their private lives just that: private. It’s difficult to see these celebrity pairs grace the red carpet, and it’s nearly impossible to find any information about them online. From Jennifer Lawrence and her husband Cooke Maroney to Taylor Swift’s very secret relationship with Joe Alwyn, here let’s take a look at 22 celebrity couples who are rarely seen together on the red carpet. Zach Braff and Florence Pugh started dating in 2019. The two celebrities have chosen to keep their relationship mostly private, though. The two had previously been the target of criticism due to their 21-year age gap.

The Midsommar actress once addressed the comments on Instagram. In a post, she says, “I do not need you to tell me who I should and should not love,” adding the caption, “Being hateful is not trendy.” Swift and Alwyn started dating in 2017 and once told Rolling Stone, “I think that in knowing him and being in the relationship I am in now, I have definitely made decisions that have made my life feel more like real life and less like just a storyline to be commented on in tabloids.” The cast of Queer Eye won many admirers when it returned. Jonathan Van Ness, a cast member, quickly won the hearts of many people. Regarding the Queer Eye star himself, JVN fell in love and wed Mark Peacock in 2020. But the celebrity held off on sharing the information immediately away. Instead, he shared the news with his followers in a show-stealing Instagram end-of-year review. They first met in 2019. Paul and Adele reportedly were friends before they started dating in 2021. While the pair has mainly stayed off of the red carpet, fans have seen glimpses of them here and there.

It didn’t take long for speculation to spread that the couple was in fact engaged. When asked about her alleged engagement on The Graham Norton Show, Adele responded, “If I was, would I ever tell anyone if I was or wasn’t?” Over the years, Jennifer Lawrence has been in several notable films. She got married to Cooke Maroney in 2019. Lawrence also made the decision to step away from the spotlight at this time.

She later explained the hiatus to Vanity Fair by saying, “I just think everybody had gotten sick of me. I’d gotten sick of me…It had just gotten to a point where I couldn’t do anything right. If I walked a red carpet, it was, ‘Why didn’t she run?’” Olivia Munn and John Mulaney have kept their relationship low-key since romance rumors first began in May 2021. The two have still stayed away from red carpet appearances, though.

Munn once told the LA Times, “If I try to say anything, I run the risk of being called messy or not telling the truth. The only way to win, for me, is to pull back and not play the game at all.” Given the combined celebrity of Olivia Wilde and Harry Styles, it’s hardly surprising that rumors about their relationship have surfaced. They haven’t, however, walked the red carpet. Wilde was questioned by Vogue during an interview about the relationship.

She replied that “It’s obviously really tempting to correct a false narrative…But I think what you realize is that when you’re really happy, it doesn’t matter what strangers think about you. All that matters to you is what’s real, and what you love, and who you love.” TV personality Stacy London revealed she is in her first “serious relationship with a woman” by introducing her girlfriend on Instagram. The former “What Not to Wear” host shared photos of herself with musician Cat Yezbak, who she said she has been dating for over a year. Keke Palmer has always kept her love life quite quiet. She began dating trainer Darius Daulton in 2021, but the two haven’t seen each other on the red carpet. Palmer talked about her love life in general before the two started dating. The star shared, “I’ve always had the same philosophy when it comes to dating…trying to keep my private life outside of my work life, to me, it’s easiest when you don’t date someone with the same career.” Robert Pattinson and Suki Waterhouse have been dating on and off since July 2018, but it’s mostly been under the radar — or, perhaps, more accurately, right under our noses. The Twilight star and Assassination Nation actress have skipped the red carpets throughout their relationship, preferring to keep their love life to themselves. American actress Rachel Zegler has confirmed her relationship with actor Josh Andres Rivera, nearly a year after the two sparked romance rumors. On February 14, the 20-year-old took to her Instagram handle and shared a post and a few stories while celebrating Valentine’s Day with her beau. Since their initial sighting together in the spring of 2016, Rachel McAdams and Jamie Linden have largely kept their relationship out of the public eye. By welcoming a baby boy in April 2018, they strengthened their relationship. When asked what it’s like being a mom, Rachel said, “It’s the greatest thing that’s ever happened to me, hands down.” Both Bill Hader and Anna Kendrick are well-known in the comedy world. They even collaborated on The To-Do List and Noelle together. It was a year before any word of Hader and Kendrick’s relationship came out. Kal Penn revealed that he is engaged to his partner Josh, with whom he’s been in a relationship for 11 years, in an interview with People on Sunday.

“I discovered my own sexuality relatively late in life compared to many other people,” he shared. “There’s no timeline on this stuff. People figure their s–t out at different times in their lives, so I’m glad I did when I did.” Jason Sudeikis and Keeley Hazell were first romantically linked in 2021. A source tells PEOPLE that the Ted Lasso actor, 46, is again spending time with the model and actress, who has a recurring role on the hit Apple+ series opposite Sudeikis. “They’re casually seeing each other again,” the source says. “It’s never been a serious thing. They’re just enjoying each other’s company.” Miles Heizer and Connor Jessup had been dating for a considerable amount of time before making their relationship publically known on Instagram.
Jessup spoke to Additude and said, “When you’re happy, you want to be happy publicly, and it made me think about the whole construction of my life in a way that I had been avoiding…I probably wouldn’t have [come out] if that hadn’t happened.” Stan is dating Onieva and seemingly has been for nearly two years; the pair were first photographed together in summer 2020. For the most part, they’ve stayed off red carpets and kept things relatively private. However, they do share content on social media, including a short film Stan posted for Onieva’s 2021 birthday. Liam Hemsworth and Gabriella Brooks first fueled romance rumors in December 2019, and the couple have continued to grow closer since. However, the two have still stayed away from red carpet appearances. Stunning news to share from actress Kat Dennings. The star took to Twitter Thursday, May 13, 2021 to announce she is seemingly engaged to Andrew W.K. Dennings tweeted the following with the message, “Don’t mind if I do @AndrewWK,” along with a picture of her holding Andrew’s hand and sporting a sizable diamond ring on her red-nailed hand. Starting out as Ana de Armas’ mystery man, Paul Boukadakis now seems to be the confirmed boyfriend of the actress, as per Page Six. Boukadakis, 37, is the former CEO of company Wheel, which later joined forces with popular dating app Tinder. The 37-year-old has been linked to Ana de Armas since June of this year after she called it quits with ex Ben Affleck. Since 2020, Kendall Jenner and Devin Booker have been dating. According to Devin, having the focus on both his business and personal lives is not difficult. He said, “I’m enjoying life to the fullest, and that came off my tongue so easily because it wasn’t always this way, but I feel like I’m in a good place right now.” An unexpected romance. Kim Kardashian and Pete Davidson’s relationship may have shocked fans in 2021, but the pair haven’t slowed down in 2022. The Keeping Up With the Kardashians alum was first linked to the Saturday Night Live star in October 2021, eight months after she filed for divorce from Kanye West.