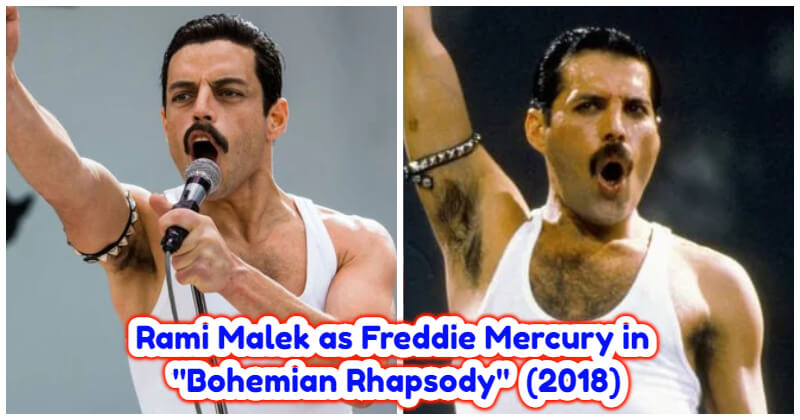 Biopics of musicians and recording artists are all the rave right now. They are one of the main ways that we learn about famous people. Some are even about those that have long left us.

Some biopics, like Eminem’s 8 Mile, are lucky enough to cast their artist as the protagonist. This allows for a more faithful approach to the film. Others are not so lucky. The studios cannot always cast the artists as the main lead in their biopics.

This could be due to many reasons. The biopics could be about an artist that has already passed. Or the person might not be at their prime. It could also be because the biopic takes place in a certain period in the past, and the artist no longer looks as they did then.

The best biopics tell the story behind a celebrity’s rise to fame. To tell these stories beautifully, the studio tries to cast the actors as accurately as their source material as possible.

Here are 19 actors that look as convincing as the musicians they played in the biopics. Elvis Presley is often known as “The King of Rock & Roll.” To play him, the studio casts Austin Butler, who was known for teen sitcoms. Butler’s performance in Elvis received critical acclaim and appreciation from the Presley family. Tommy Lee is the founder member and drummer of the Mötley Crüe metal band. He gained critical recognition in 2022 for his performance as Tommy Lee in the Hulu drama Pam & Tommy. But you might better recognize Stan as MCU’s Winter Soldier. Aretha Franklin, is known as “The Queen of Soul.” Hudson is most known for her talents in music, cinema, and television, and she has garnered several awards over her career, including an Academy Award, two Grammy Awards, a Daytime Emmy Award, and a Tony Award, making her the youngest woman and the second black woman to do so. Judy Garland was an actress and singer best remembered for her role in The Wizard of Oz (1939). Due to her work in Judy, Zellweger took home the Academy Award for Best Actress. She has won several accolades, including two Academy Awards, two British Academy Film Awards, and four Golden Globe Awards. Elton John is regarded as one of the most influential singer-songwriters in the history of pop music. Egerton’s portrayal of singer Elton John in the musical Rocketman (2019) earned him the Golden Globe Award. Egerton is also known for his role in the Kingsman franchise. Freddie Mercury was the legendary lead singer of the band Queen and a singer-songwriter. Rami Malek won the Academy Award, Golden Globe Award, Screen Actors Guild Award, and British Academy Film Award for Best Actor for his work in the movie. Jimi Hendrix, the “most accomplished instrumentalist of all time,” was a singer, songwriter, and guitarist. The actor who plays Jimi, André 3000, has been named as one of the best rappers of all time. Brian Wilson is a singer-songwriter and Beach Boys, co-founder. Paul Dano was nominated for a Golden Globe for Best Supporting Actor for his performance in the movie Love & Mercy. Joan Jett is a vocalist best known for her work with Joan Jett & the Blackhearts and the Runaways. Before Kristen Stewart received acclaim for her work in Princess Diana’s biopic, she started in The Runaways. The Runaways showcases Steward’s considerable acting skills and plays an important part in separating her from the wooden Bella Swan from Twilight. Ian Curtis was the lead singer and songwriter for Joy Division. Sam Riley won the Most Promising Newcomer award for his work in the movie at the British Independent Film Awards. Bob Dylan is regarded as one of the greatest songwriters of all time. I’m Not There earned Cate Blanchett an Oscar nomination for the role. Blanchett is also considered one of the best actors of her generation, having won several awards, including two Academy Awards, three British Academy Film Awards, three Screen Actors Guild Awards, and three Golden Globe Awards. Édith Piaf, is one of France’s most popular singers on a global scale. Cotillard won her second César Award, a BAFTA Award, a Golden Globe Award, a Lumières Award, and the Academy Award for Best Actress for her work in La Vie en Rose (2007), becoming the first and (as of 2022) only actor to win an Academy Award for a French-language performance, and the second actress to win this award for a foreign language performance. Johnny Cash was a singer-songwriter and a pivotal player in the history of American country music. Phoenix received a Grammy Award, a Golden Globe Award, and an Academy Award nomination for Best Actor. The New York Times named him one of the finest performers of the twenty-first century in 2020. Ray Charles, was a singer-songwriter, pianist, and composer known as “The Genius.” Thanks to his portrayal of Ray Charles, Jamie Foxx was the second actor to win all five major lead actor awards for the same performance, having previously won the Academy Award, British Academy Film Award, Screen Actors Guild Award, Critics’ Choice Movie Award, and Golden Globe Award. Selena Quintanilla is known as the “Queen of Tejano Music.” She became the first Hispanic actress to earn more than $1 million for her first big role in Selena (1997). The role also launches her into superstardom. Tina Turner is known as the “Queen of Rock ‘n’ Roll.” Bassett’s work earned her an Academy Award nomination for Best Actress and is considered her breakthrough role. She has also won three Black Reel Awards, a Golden Globe Award, seven NAACP Image Awards, and a Screen Actors Guild Award, as well as nominations for an Academy Award and seven Primetime Emmy Awards in her career. Jim Morrison is the main vocalist of the Doors and a composer, poet, and performer. Kilmer received acclaim for his portrayal of Jim Morrison. Movies starring Kilmer have made nearly $3.5 billion at the global box office, making him one of the highest-paid performers of the 1990s. Sid Vicious was an English musician best known as the bassist for the band Sex Pistols. For Oldman, his work in Sid and Nancy is his breakout role. His films have made more than $11 billion worldwide, making him one of the most successful performers of all time. Buddy Holly was a singer-songwriter and one of rock ‘n’ roll’s most influential performers in the mid-1950s. Thanks to his work in the movie, Gary Busey received an Academy Award nomination for Best Actor and the National Society of Film Critics Award for Best Actor.