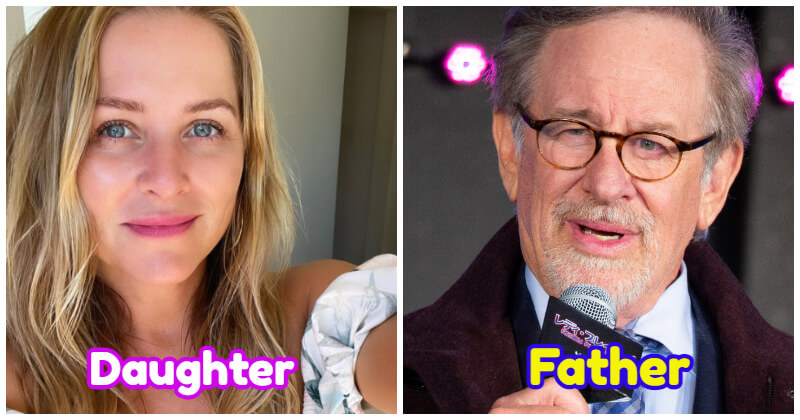 When it comes to famous fathers and famous kids, the apple doesn’t fall far from the tree.

Celebrities with famous parents have been given priority and attention since they were born, but this is by no means without some complications. In addition to the scrutiny of the paparazzi, they have to face the pressure of expectations from both families and the public. It’s not easy!

Despite all this, a large number of these children are still involved in the entertainment industry. And like their fathers, they become third- or even fourth-generation A-list stars. For example, Angelina Jolie followed in her father Jon Voight’s footsteps to become one of Hollywood’s most powerful and successful people. Or Doctor Strange Benedict Cumberbatch was inspired by his father, Timothy Carlton, an English actor, to become an excellent actor.

However, there are some Hollywood stars who aren’t known for having famous parents. So, we’ve listed 15 celebs who you might not know have famous fathers. Scroll down to see! After six weeks of extensive public trial with ex-wife Amber Heard, Johnny Depp is probably the most prominent name on your news feed right now. But what you can see is that his daughter, Lily-Rose Depp, chose to remain silent throughout the proceedings. The daughter of one of the greatest French singers of all time, Vanessa Paradis, and one of the most famous film actors in the world, Johnny Depp, Lily-Rose was born and became the center of attention. Continuing a legacy destined for fame, Lily-Rose stars in both French and English movies and, in 2015, she was named the youngest brand ambassador for Chanel. Jennifer Aniston, the daughter of actors John Aniston and Nancy Dow, started acting at an early age and rose to fame thanks to her role as Rachel Green in “Friends”. She is the recipient of a star on the Hollywood Walk of Fame and is the co-founder of Echo Films – a production company, established in 2008. John Aniston, also successful in television series, portrays Victor Kiriakis in the NBC drama series “Days of Our Lives”. This is one of the longest-running television programs in the world with episodes still continuing to air to this day. One of Hollywood’s most well-known directors, Steven Spielberg is known for his work on timeless films like “Jaws”, “E.T.”, “Empire of the Sun”, as well as more recently “West Side Story”(2022). What most people don’t know is that Jessica Capshaw, who famously starred as Dr. Arizona Robbins on “Grey’s Anatomy” for 10 seasons, is Spielberg’s stepdaughter. Capshaw pursued her acting career without relying on her famous stepfather for opportunities, graduating from Brown University with a Bachelor of Arts degree in English and then attending the Royal Academy of Dramatic Arts in London. As the son of famous actors Meg Ryan and Dennis Quaid, Jack Quaid was undoubtedly surrounded by the performing arts. He made his acting debut in “The Hunger Games” before landing his breakthrough role as a vigilante in the superhero series “The Boys’. Like his father, he has also played a variety of tragic and comic parts. Dennis’ credits include “The Parent Trap”, “Good Company”, and “Vantage Point”. Benedict Cumberbatch has had major roles in plays as well as television and film. From portraying Sherlock Holmes in the BBC series “Sherlock” to Doctor Strange in MCU movies “Doctor Strange” and “Doctor Strange in the Multiverse of Madness”, Cumberbatch becomes famous around the world. For his contribution, he gained various awards including a British Academy Television Award, a Primetime Emmy Award and a Laurence Olivier Award, in addition to nominations for two Academy Awards, two British Academy Film Awards and four Golden Globe Awards. Although Timothy Carlton, Cumberbatch’s father, may not be as well known abroad, he had an equally illustrious career in England, appearing in several BBC television series since 1996. It is difficult to imagine Angelina Jolie, one of Hollywood’s most powerful and successful people, having such a famous movie star father. After rising to fame in the 1970s, Jon Voight had prominent biographical performances in the 2000s, including his portrayal of sportsman Howard Cosell in the film “Ali”. Angelina Jolie and her father have had a very fractured relationship, especially when they were apart for a long time after her parent’s divorce and Jon’s erratic behavior during Jolie’s adult years. But the presence of Jolie’s kids, Voight’s grandchildren as well as their shared love of the performing arts, seem to have helped ease this tension. Before pivoting to acting, John David Washington first pursued a professional football career. He becomes an actor because he had influenced by his two-time Oscar-winning father Denzel Washington. John David Washington \has rapidly risen to fame in the past five years by starring in “BlacKkKlansman”, “Tenet”, and “Malcolm & Marie”. You may know Blake Lively for her performance in “The Sisterhood of the Traveling Pants”, but do you know that Blake’s father Ernie Lively played her on-screen dad? Ernie has spent more than 50 years working in Hollywood, from the TV series “The Waltons” to the action film “Passenger 57”. Blake is one of his five children who has been inspired to pursue a career in acting. Although Ernie passed away, his legacy most certainly lives on. The British-American actress Lily Collins is the child of musician Phil Collins and his second wife, socialite Jill Tavelman. She began performing when she was 2 years old and then appeared in many rom-coms including “The English Teacher” and “Love, Rosie”. Her father, Phil Collins, was a solo performer in addition to being the lead singer of the 1980s rock band Genesis. Her relationship with her father deteriorated when her parents separated when she was five, which led to them becoming estranged. Now that she and her father are back in touch, she has decided to forgive him for not being present when she was a child. Like father, like daughter. Both Eric Roberts and Emma Roberts are famous actors who have received critical acclaim for their leading performances in hit films, independent works, and television shows. From “Runaway Train” to “The Dark Knight”, Eric Roberts is one of only a handful of actors to have earned over 600 credits. Emma Roberts followed suit at a young age, making her acting debut at the age of nine. Since then, she has played a variety of characters, including Chanel Oberlin in “Scream Queens” and “Nancy Drew”(2007). Ben Platt is most famous for his title role in the Broadway musical “Dear Evan Hansen”, which made him become the youngest recipient of the Tony Award for Best Actor in a musical. His father, Marc Platt, is undoubtedly the source of his passion for the theater. Marc Platt has produced numerous musicals as well as Academy Award-winning movies including “La La Land’ and “The Trial of the Chicago 7”. It is impossible not to recognize Ben Stiller’s distinct humorous style because he has written, starred in, directed, or produced more than 50 movies during his career. As a son of comedic legend Jerry Stiller, who starred in the ’90s sitcom Seinfeld, Ben was raised in the acting and comedy scenes from a very young age. Before Jerry passed away in 2020, they made an amazing father-son team making several on-screen appearances together, including “Zoolander” and “The Heartbreak Kid.” Zo Kravitz is the child of Hollywood royalty Lisa Bonet and Lenny Kravitz. She most recently co-starred with Robert Pattinson in “The Batman” as Catwoman. Along with being a well-known actress, Zo has also published a number of albums, following in the footsteps of her rock singer father. She is now producing her debut album with producer Jack Antonoff. With Lenny being a four-time Grammy winner for songs like “It Ain’t Over Til’ It’s Over” and “Again,” there is no doubt that the Kravitz family is brimming with artistic brilliance. The Academy Award winner, actor Will Smith, definitely prepared his children for stardom. Jaden Smith made his debut by acting alongside Will, first in “The Pursuit of Happyness” and then in “After Earth”. Willow Smith made her acting debut alongside her father, but she is much more interested in music. “Whip My Hair,” her debut hit, was promptly certified platinum and entered the Billboard Hot 100. Since then, she has put out four albums; the most recent being “Transparent Soul,” co-produced by herself and Tyler Cole. Nicolas Cage, also known as Nicolas Kim Coppola, was raised in the Coppola family of Italian-American filmmakers and actors. Despite having a background in academia, Cage’s father August Coppola eventually worked as a film executive for his renowned brother Francis Ford Coppola’s film studio. After a name change early in his career, Cage rose to fame on his own and was recognized for his work in “Leaving Las Vegas” by receiving an Academy Award.