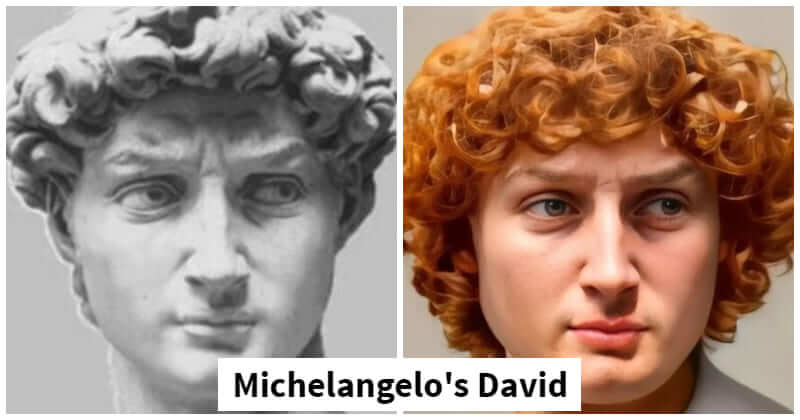 Have you ever imagined what historical figures would look like if they were modern-day people? In the past, we had to rely on sculptures, paintings, and written descriptions to figure out the appearance of certain well-known historical characters. Of course, there were some misinterpretations as a result of this. Fortunately, Photoshop has made it simple for us to see how they seem.

Graphic designer and history lover Becca Saladin came up with the idea of recreating some well-known historical figures as modern-day people and you’ll have to agree that the results are awesome. We have collected her work in a list below. Scroll down to check them out. We are sure that they will make your jaw drop. Antinous (November 27, 111 – October 130) was the homosexual lover of the Roman Emperor Hadrian. Victoria Adelaide Marie Louise was Princess Royal of Great Britain and Ireland, eldest daughter of Queen Victoria of the United Kingdom and Prince Albert of Saxe-Coburg and Gotha. Herodotus was a Greek writer and geographer credited with being the first historian. Herodotus wrote “The Histories,” a lengthy chronicle of the Greco-Persian Wars, which he published somewhere around the year 425 B.C. (The term “historie” in Greek means “inquiry”). The Birth of Venus is a painting by Sandro Botticelli, commissioned by Lorenzo di Pierfrancesco de Medici for the Villa Medicea di Castello. It is tempera on canvas and measures 172.5 cm high by 278.5 cm wide. Daughter of a slave with a member of the aristocracy, the young woman may have influenced the debate on the end of slavery. According to the Bible, David was red-haired, and of short stature and his hair was red as the color of fire. Demeter is the Greek goddess of harvest, fertility, cultivated land, and sacred right, and holds the cycle of life and death. Thomas Jefferson (1743-1826) was the primary draftsman of the Declaration of Independence of the United States and the nation’s first secretary of state (1789–94), its second vice president (1797–1801), and, as the third president (1801–09), the statesman responsible for the Louisiana Purchase. She served in the Brazilian War of Independence in 1822–23 dressed as a man. She was promoted to cadet and Lieutenant and decorated with the Imperial order. She has been called “Brazilian Joan of Arc,” and has become a kind of national legendary figure. Quitéria was the first woman to serve in a military unit in Brazil. Michelangelo di Lodovico Buonarroti Simoni was born on March 6, 1475 in Caprese, Republic of Florence and died on February 18, 1564, in Rome.

He was an Italian Renaissance sculptor, painter, architect, and poet who exerted an unparalleled influence on the development of Western art. Lucius Verus was co-emperor, with Marcus Aurelius, of the Roman Empire as Augustus, until 169, when he died of plague during a campaign against the Parthians. Hercules or Heracles was a hero of Greek mythology known for his great strength. He was the son of Zeus and Alcmene. His first wife and children were murdered by himself when he had a fit of madness caused by Hera. Mary Stuart was Queen of Scots in the 16th century. She competed with Elizabeth I for the throne of England and was executed for conspiring against the English queen. Vasco da Gama was a 15th-century Portuguese navigator, explorer, and administrator. It has great importance in Portuguese navigations at the time of the discoveries and conquests. He was appointed by King Dom Manuel I, commander of the fleet that left Europe and arrived in the Indies. Hadrian (Roman Emperor) (76-138) was the third Roman emperor, of the Antonine Dynasty, who ruled between the years 117 and 138 and marked the apogee of the Roman Empire.

Hadrian (Publios Aelius Hadrianus) was born in Italica (Bética), today in Spain, on January 24, 76. Belonging to the Antonine dynasty, he was the nephew of Emperor Trajan. He was a literate man, a lover of the arts and the law. “Mestizo” from 1934 painted in oil on canvas by the famous Brazilian painter Candido Portinari. In the painting, the artist shows a character in a coffee plantation, working in the field. He was a Pharaoh of the Eighteenth Dynasty of Egypt who reigned for seventeen years and died in 1336 or 1334 BC. The Polish scientist became the first female recipient in the history of the Nobel Prize in Physics. And she won twice.

She had a poor childhood, and to study, she had to leave Poland for France in order to get around the prohibition and lack of opportunity for women in science.

She was top of her class in her master’s program. She and her husband, Pierre Curie developed the principles of radioactivity. She ended up dying at age 67 from the negative effects of radiation, for so long she was exposed to her studies and experiments. Cicero was one of the most important philosophers of ancient Rome. Pocahontas was a gifted and animated 10-year-old girl when Jamestown was founded in 1607. She was the daughter of the Great Powhatan, who ruled over numerous client tribes in the Chesapeake, the region the Powhatans called Tsenacomaca, and she was chosen for a unique duty due to her intelligence and personality by the Great Powhatan. Captain John Smith said her “wit, and spirit” made her stand out.

20 DIY Projects That Ended Up All Way Wrong

These Brutally Honest Tweets About Work Are Cracking Us Up

Some Of The Dirtiest Kitchen Secrets That Should Never Be Revealed

No Matter How Bad Your Day Seems, There Is Always Someone Who Has It Worse

These People Seriously Deserve An Award For Their Fantasy

Times People Wanted To Appear Edgy And Embarrassed Themselves

Best Funny Jokes Collections That Make All Your Friends Laugh

This Subreddit Is Sharing “Mildly Interesting” Stuff, And Here Are Their 20 Best Posts

People Are Sharing The Weirdest Things They Did As Kids, And They’re So Hilarious

If You Want To Know What Being Unlucky Really Means, Ask These Folks

15 Worst Tattoos Ever To Make Your Day