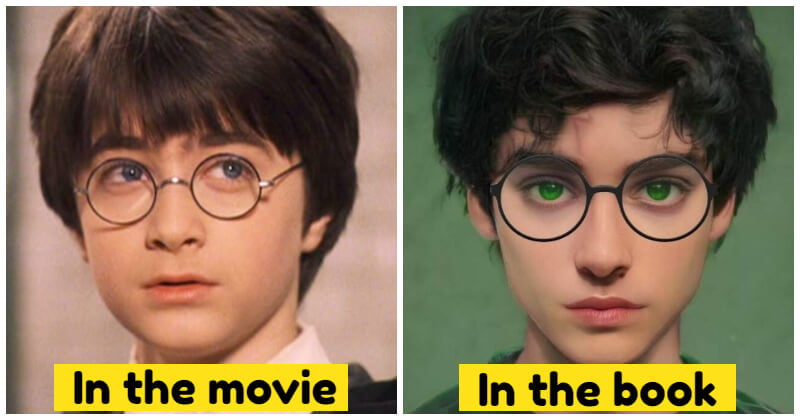 The “Harry Potter” series by J.K. Rowling is one of the most popular sets of children’s novels to ever exist. For its popularity, this novel was quickly adapted to movies and for a decade, the “Harry Potter” franchise ruled the box office. Although the series was intended for children, the wizarding world sparked a magical flame in the hearts of adults.

When making a film adaptation, the cast is chosen based on book descriptions. However, looks are not always precious. J.K. Rowling admitted that Emma Watson was too pretty to embody Hermione but luckily, she fell in love with Emma before meeting her. To help fans to see what Harry Potter characters would look like according to characteristics described in the book, a Vietnamese woman used AI and her artistic skills to create plainer, more accurate book versions of Harry Potter characters.

Scrolling down to see them. He looks like a protagonist from a Vampire TV series. (MarmotArchivist) She looks like the bully in any teen movie. (CheeseGod04 ) This is good, but outside of appearance, there’s voice, intonation, attitude, body language, and the ability to carry the clothes. Alan Rickman was always my Snape, from the first turn of the page. (Smilodon, a Bad Cat) Makes sense. According to the books she had a heart-shaped face and pink hair. (KC) Handsome and dangerous. Yes, it works, but it’s a bit too obvious. The actor in the movie was perfect – spectacularly handsome, and only looked nasty when he was taking his mask off. (Fabio Paolo Barbieri) Sure they give her realistic-looking green eyes while giving Harry those florescent orbs. (Cody) She looks like she smells something bad. (Arne Timmer) I love this Ginny. My only complaint about Ginny in the movies though is that there just wasn’t much of her in them. (Kim Pacheco)

Beautiful, intelligent, willful, not realizing how lovely she is because of a shower of freckles. Much better than the girl in the movies. Pretty much Ginny as I wanted her to be. (Fabio Paolo Barbieri) Not the only Asian character, but it is a horrible name. (Veronica H. Song) I don’t know why people are saying this is creepy, but yet are probably the same people who complained about Hermione being too “pretty and normal looking” in the films, lacking buck teeth and a plain look. (Bored_Randomツ)

she was portrayed as an ugly duckling in the book. Bucktoothed with wild bushy hair. JK Rollings questioned if Emma Watson would be right for the role since she was too pretty. She was a geek to the core and became one of the most important characters in the book. (Mobey Drunk) The eyes that’s what pissed me off most in the movie! He was allergic to contacts but still. (Julieandthephatones)

This is what I imagined from reading the books. (Dianne Riedel) He looks like he could also be a bit inbred which is accurate. (Annalise Walker) Everything is out of proportion. (GadgetGirl) He looks like a computer technician. (C A O S) She Looks like Eva Green from “Penny Dreadful”. (Melissa Crippen) Needs a more smug mouth and squinty eyes. Felt the actor they cast was spot on! (joyous) Though Maggie Smith makes a great Mcgonagall, in the books she was much younger. (KC) I forgot that Petunia was blonde. Odd that they wouldn’t just make her wear a wig for her scenes. (Monday) I prefer Robert Pattinson, this guy looks like an improved version of me! (Alexandro Lopes)