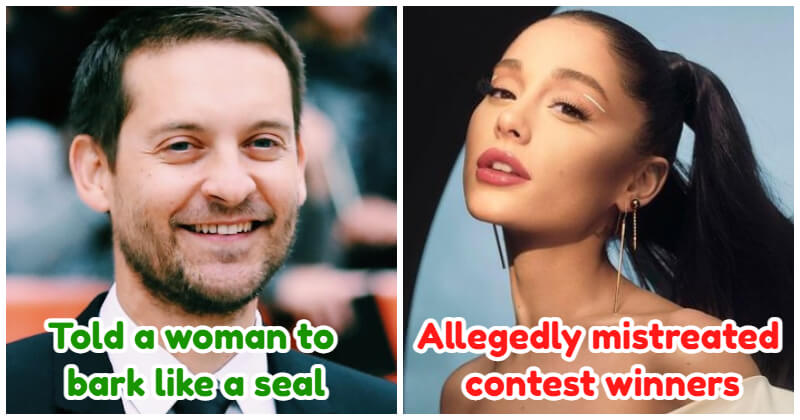 Not everyone can be “on” all the time. Sometimes we are stuck on bad days when we just want to snap at anyone coming close to us and celebrities are no exception. Fans are the reason famous people live glamorous lifestyles. They often attend their favorite celebs’ concerts, buy the products that they are brand ambassadors for, or watch their movies and shows. However, sometimes celebs forget this important fact.

They’ve been labeled condescending, testy, or just plain rude to fans. Even the kindest stars have probably had a moment they were harsh with fans who invaded their personal space or dared to look at them sideways. Some endured the pressures of fame too much while some secretly hate their fans. No matter what it is, the terrible encounters with rude stars will make you gasp.

If you’re curious about times celebrities were rude to their fans, scroll down to see. There have been numerous occasions when Justin Bieber has taken desperate measures to avoid paparazzi and fans who want a selfie. The singer used to yell at a fan when the fan tried to snap a selfie with him. Additionally, when touring in Argentina, he reportedly ordered his security team to beat up a photographer. Christian Bale’s former publicist revealed that Bale was often angry when fans approached him. When a fan sent him a letter at his house, the actor allegedly told his publicist the fan should be eliminated. Rihanna ranked as one of the rudest celebs after one night. When a 16-year-old girl shared a photo of her bat-winged pantsuit, inspired by the singer, Rihanna rewarded her fan by making her the laughing stock of the Internet. She tweeted side-by-side photos of herself and Carter with the hashtag #PromBat. Actor Dan O’Connor revealed that his daughters had won an MTV contest to meet their favorite singer and his little girls had to wait for an entire day. when the meet-and-greet happened, the singer spent just 15 seconds with them. She even required them to delete the photos she’s taken with them. According to fans, Tobey Maguire is the rudest actor in Hollywood. Molly Bloom, the author of the 2014 memoir Molly’s Game, said that Maguire would reportedly offer her a 1,000-dollar poker chip if she could bark like a seal. Russel Crowe is known for having little patience for fans. In a clip with host Ryan O’Neal, he was seen insulting the audience for clapping out of sync with the music, as well as insulting the host. It is the fact that Christina Aguilera doesn’t know actress Valerie Bertinelli. After Bertinelli allegedly went up to the singer as a fan and praised her for her music, Aguilera rudely replied, “Yeah, whatever.” Bertinelli was shocked at Aguilera’s behavior and wonder why Aguilera couldn’t just be nice. A London student had allegedly flown out to see his favorite actress. He tried to hand Megan Fox a yellow rose but she ignored him. Although she claimed it was accidental, she got a bad reputation. Kevin James has a veritable litany of fan complaints levied against him. He reportedly told one fan, who had worked for him as a waiter, “You were told not to speak to me” while the waiter tried to do his job and offer James a drink. Charlize Theron was a stereotypical mean girl in Hollywood when trying to get past her mistakes. That made some fans annoyed and they called her “very rude” sometimes. Cuba Gooding Jr called a female bartender a racist and shoved her for kicking him out of a drinking establishment. According to the bartender, the actor was intoxicated and got angry at other bar patrons for taking pictures with him. That led to the issuance of a warrant. During an acoustic performance in Tennessee, a fan jumped on his stage to rock out a song. Corgan punched the fan in the face and of course, the fan immediately existed on the stage.