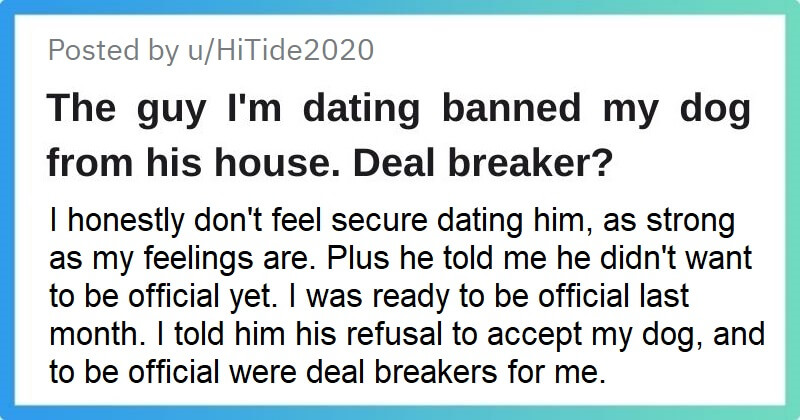 A girl has taken to Reddit for advice after her date forbade her dog from entering his home, and she is confused about whether this is a bust-up.

Although over 80% of people believe opposites attract, it’s not necessarily true. In fact, it’s not ‘opposites’ that draw us to our romantic partners but certain personality traits, similarities, and even biological cues. In this case, a girl’s date prevented her dog from going to his house, which put her individual in an awkward situation.

The singleton acknowledged that it is a “deal-breaker,” but turned to Reddit to seek sympathy from other dog owners.

The post written by HiTide2020 said, “We’ve been dating since February. I was falling for him. He is funny, outgoing, adventurous, and whip-smart.

“However, he has three autonomous vacuums, complains about dog hair (even when his vacuum’s cleaned everything), and many other things I don’t see being big deals.” Source: Pixabay (not the actual photo)

There are many details the two differ on, such as leaving a cup in the man’s bedroom and hanging the hand towel back on the rail in an awkward position.

“I honestly don’t feel secure dating him, as strong as my feelings are,” she said.

“I told him his refusal to accept my dog, and to be official were deal breakers for me,” she said.

The couple is currently taking a two-week communication break to reflect on their priorities and determine whether they are truly a perfect match.

The post concluded by requesting: “Fellow dog owners, would a person who refuses to have your dog at their house be a deal-breaker?” Source: aideabogados (not the actual photo)

There are more than 300 Reddit users who have posted their thoughts and suggestions in the comments section, with so many encouraging the dog owner to stay far away from him.

Many individuals considered his actions “red flags” and labeled him “controlling”.

“I’m in shock that no one here has suggested that this whole ‘leave no evidence and not going official thing’ is proof you’re a side chick,” one person commented.

Others supported the slogan “dogs before dudes” and told them to prioritize their four-legged friends. “You had your dog before you had that man. The man goes. My pets are my family, I’m not giving them up for anyone,” a pet parent wrote.

Another user humorously joked, “Love me, love my dog”.

Though some people disagreed and said it didn’t have to end the relationship.

In your view, who is the deal-breaker? Please share your opinion with us in the comment section below!

Rescue The Fox And The Hound Build A Strong Bond, Proving Friendship Has No Barrier