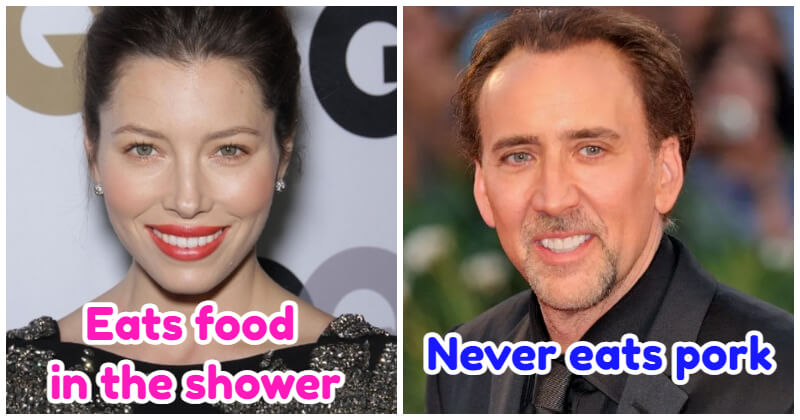 When it comes to eating habits, all of us have our preferences, including celebrities. Many stars visit world-class restaurants to enjoy fancy dishes while some are really into eating street food. However, several famous people exhibit their odd eating behavior in different ways. In some cases, that extends to the food they eat, and how they eat it.

For example, model Chrissy Teigen revealed her bizarre way of enjoying Doritos in an interview. She said that she licked off the nacho cheese seasoning and put the chips back in the bag. Many people gasped with amazement over her.

If you’re curious about the strange celebrity eating habits, keep scrolling down to see.

#1 Chelsea Peretti leaves the frosting and eats the cake instead Chelsea Peretti shares a photo on Instagram, showing the most unusual cake-eating method: scraping out the inside. She says that what she doesn’t enjoy was “two-inch-thick” frosting because it’s a chunk of butter. In an interview with Glamour magazine, singer Fergie reveals she never misses her daily shot of organic apple vinegar. For her, it’s a way to help her stomach better. In an interview with The Sun, Cage said he opts for which animals to eat based on their mating habits. He can eat fish and birds because they are dignified with sex but pigs are not.

#4 Jessica Biel takes food with her in the shower Jessica Biel admits that she eats food in the shower. She used to bring chicken apple sausage and espresso there and felt that it was amazing. Kourtney Kardashian is really into Reese’s Peanut Butter Cup and she has a weird way of eating it. She peels the chocolate off the peanut butter cup and eats it first. The tennis star always avoids dairy, caffeine, and refined sugars because of problems with wheat and gluten. Additionally, after beating Rafael Nadal in 2011, he sank to his knees and started eating grass on the Center Court lawn. He joked that the grass tasted well. Ed Sheeran is a fan of ketchup that one of his multiple tattoos features the logo of his preferred brand, Heinz. He had run out of patience with going to places that didn’t serve it. Scott Foley shared a video on Instagram in which he scooped out a great big dollop of Skippy peanut butter and smeared it all over a plate full of scrambled eggs. Many fans were shocked at his action. Houghton makes tuna fish salad and mixes it with fruit punch. After that, she makes a sandwich out of it and dips that sandwich into a glass of fruit punch. That’s so weird. Giada De Laurentiis uses lemonade to enhance the flavor of cookies. Every time she does that, she often closes her eyes and goes “yummy” and declares “You’ve got to try it”.