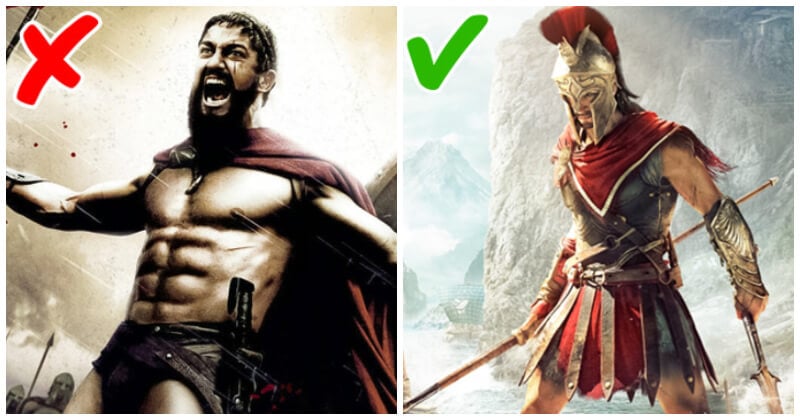 Can Hollywood movies help us know more about history? I would say yes. Nothing can bring history to life like the big screen. Popular films increase interest in history and contain much accurate information, but producers of these films often take liberties with facts to tell a more entertaining story. Unfortunately, the movie business doesn’t always portray life as it actually happens, because a spectacle is what the audience wants – not pure reality. So, one would have to know their history fairly well in order to know where the fact stops and the falsehood begins.

With that in mind, let’s dig into some movie myths about history that you probably thought were true.

#1 The first time Pocahontas met the colonists, she was a child. We perceive Pocahontas’ protagonist as a mature lady. Pocahontas actually first encountered the colonists and John Smith when she was a young kid, between the ages of 10 and 12. Even the question of whether she was the one who saved Smith’s life is up for discussion.

#2 In the Middle Ages, hygiene wasn’t so horrible. Maybe you’ve seen a medieval movie where a commoner was covered in pus and black. It is true that the health situation was not as good as it is now, but Hollywood movies portray it as much worse than it really is.

#3 Armor is routinely portrayed in movies and television shows as far less effective than it was in historical reality. Quite frankly, there is no sword in existence that can realistically penetrate plate armor. If you swing a sword at someone in solid plate armor, the most you’ll do is dent it and even that will only happen if you happen to be extremely strong and wielding an extremely large sword. In the 1990s, the first dinosaur fossils with what seem to be feather-like features were discovered. Then came further revelations. According to certain research published in 2011, all dinosaurs may have possessed feathered coverings on some or all of their bodies, similar to how all mammals have hair, even though not all mammals have hairy coats. Although the first dinosaurs are thought to have emerged some 245 million years ago, dinosaurs with feathers have been dated to only 180 million years ago. How many movies featuring characters who were old and wise from medieval times can you name? Although it was generally believed that people born in the Middle Ages would only survive until their 30s, this was not always the case.

Diseases, a high newborn mortality rate, a lack of modern treatment, the plague, and starvation all contributed to the reduced life expectancy. However, this does not imply that you passed away the minute you turned 30. In fact, assuming you made it through infancy, you may anticipate living to be between 62 and 70 years old, which is a reasonably average age.

#6 The hair of women was not left loose. It’s likely that you’ve seen movies where ladies in the Victorian or medieval eras have long, flowing hair, but this wasn’t the case in reality. In reality, women covered their hair, braided it, and wore it up since displaying long hair was viewed as impolite and a sign of immorality and temptation.

This was especially true for women who were married. Unmarried women and girls were permitted to let their hair hang a little looser, although even in the Victorian era, this was frowned upon.

#7 Battles weren’t all that epic, honestly. We’ve all seen the movie where the leader of the warriors gives a speech to the warriors before the battle begins, but that’s not true. In such a situation, with the presence of tens of thousands of men, how could his voice be heard?

Smaller armies had battle speeches of this size; with bigger armies, the generals would speak to their men in blocks or send out messages. But this wouldn’t look as epic on the big screen. The empty hand kiss became particularly popular in some countries until the Victorian era. In fact, there have been mixed reactions to this move. Some people consider it playful and others consider it inappropriate. Due to films like 300, we commonly see Spartans as sporting loincloths and capes. They could have finally given up their body armor, but that was definitely not the case initially.
Going into battle, a Spartan soldier, or hoplite, wore a large bronze helmet, breastplate and ankle guards, and carried a round shield made of bronze and wood, a long spear and sword. Spartan warriors were also known for their long hair and red cloaks.

#10 At the time, neither Braveheart nor the Scottish wore kilts. Anyone who has watched Braveheart is aware that the Scots wore kilts. But it took another 300 years before kilts were even invented.