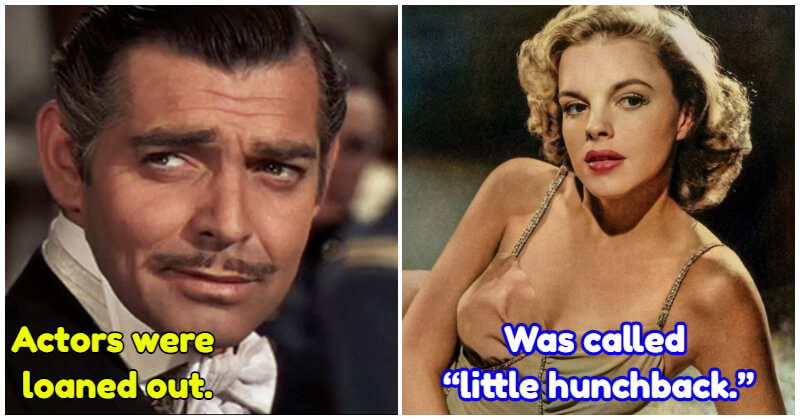 The Golden Age of Hollywood, also known as old Hollywood, lasted between the 20s and the 60s of the 20th century. Some of the biggest stars came from this era, such as Audrey Hepburn and Marilyn Monroe. This was also the age when studios had full control over the stars. Studios helped set up the rules of the old Hollywood, and it was the actors’ job to follow those rules.

Some rules were particularly harsh on the stars of the old Hollywood. These 9 rules are among the most common we have seen.

#1 Actors were forced to fake relationships Back in the day, filmmakers saw relationships as a highly effective marketing campaign for their movies. The fake relationships between actors are often for the sake of publicity. This is one of many things that still exist to this day. Just look at Shawn Mendes and Camilla Cabello.

#2 Actors were forced to use stage names You may notice some Hollywood actors use their stage name instead of their real name. This is because studios considered actors’ real names to be dull, hard to spell and at times unattractive. One example of this is Joan Crawford. The head of the studio did not like the name Crawford, for it sounded like “sewer”, and her name would later be altered by a vote.

#3 Actors were loaned out Once the contract has been signed, film studios were granted full control over the actors. Some would lend out their actors to other studios. The cost of “renting” an actor usually depends on how famous that actor is. To actors of Hollywood, appearance is everything. Other than public appearances, actors change their looks to suit the movies they are playing in. Sometimes, the movie companies would enforce this change on the stars of Hollywood. Even kids may not be exempt from this. Working in a movie studio is never an easy job. Studios often play tough, and as a result, it creates a sense of insecurity within the actors. For example, the head of MGM once referred to Judy Garland as a “little hunchback”. Because of this, Judy had the “girl next door” mentality. Even with the help of her friends, she did not feel any better. Studios love focusing on the attractive parts of an actor’s body in an attempt to promote the movie. 20th Century Fox once promoted Betty Grable and her beautiful legs. For a while, Betty’s legs were the talk of the town.

#7 The personal lives of actors were controlled Film studios have control over all aspects of an actor’s life. This includes a celebrity’s relationship. For many celebs, their relationships did not last long. When Elizabeth Taylor reached 18 years old, she intended to marry Conrad Nicholson Hilton. Their marriage did not last, as MGM took advantage of this event for their movie, Father of the Bride, in which Taylor starred in.

#8 Their past and their image were made up This was more common in old Hollywood, as the internet was not yet introduced to the world. Because not much was known about the actors’ past, studios often told them to create alternative versions. Becoming another person was part of their job, but some did not like it.

#9 They were forced to be polite with the press Movie stars had to pose for the shot whenever the journalists asked them to. This was common in Hollywood, both old and new, but on many occasions it also caused the actors to lose their patience.