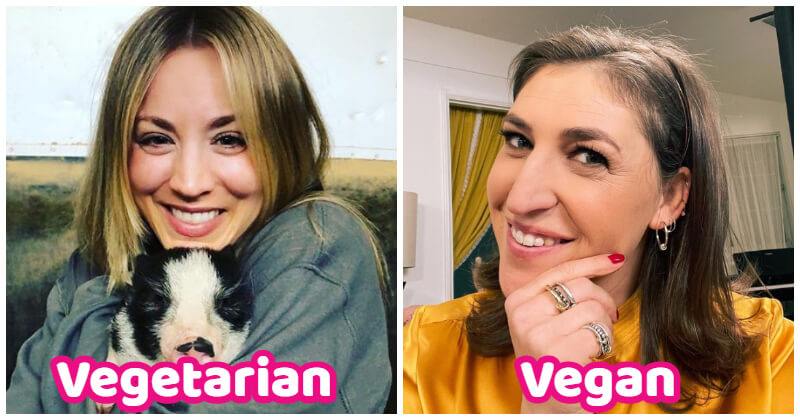 Recently, the number of vegetarians and vegans has rapidly increased. And people who support vegetarianism and veganism, share the similar purpose of avoiding aminal products. In fact, people have followed vegetarian diets since 600 B.C. But the reason for becoming a vegetarian hasn’t changed over time. Vegetarians still practice them for several reasons, such as health, ethics, environmentalism, and religion. And veganism is regarded as the strictest form of vegetarianism.

We can’t deny the benefits of being vegetarians and vegans. They are also strong animal advocates, including many celebrities featured in this article. These celebrities have spoken out about their support for vegetarianism and how it has changed their lifestyle. They actually adopted a healthy lifestyle and never look back.

However, we all agree that poorly planned vegetarian and vegan diets could lead you to have low intakes of some nutrients, particularly iron, calcium, zinc, and vitamin D (D3 and D4). If these celebs inspire you to go vegetarian or vegan, you should research which plan is the most suitable for you.

Below are 12 celebrities who apply vegetarian and vegan diets. Let’s take a look at how they stay positive with these healthy lifestyles. The Doctor Strange star was questioned about enjoying the culture of Singapore in an interview. He said he love going to the food market and eating the food, as much as a vegan could.

When it came to a weird question about if he had to drink egg whites. He immediately responded, “No, I eat a plant-based diet.” In an interview, the musician Travis Barker spoke about being vegan. Travis revealed that when he found this way of eating, he gained so much energy in his daily life.

“I can go all day, and after it all, I never find myself getting tired. No matter what kind of shows I have done, or workouts I do on top of it, I still have to force myself to sleep at night.”, he said. Kaley Cuoco has spoken out about protecting animals. She has gone vegetarian for a long time and adopted many animals such as horses, rabbits, and dogs. She also works with animal shelters and Paw Work.

She also worked with Farm Sanctuary to help rescue turkeys for Thanksgiving. She said, “No more meat, I’m like, done.” The Riverdale actor Madelaine Petsch said she became vegetarian and turned vegan at 14 and felt healthier and less lethargic.

She wants to expand the vegan community and said, “When I want to spread a message about the environment or veganism, I try to do it with positivity and by giving people the information to decide for themselves. I want to teach people how positive and easy it is to be vegan, I don’t want to make it seem like it’s this big feat.” Bryan Adam has shared his opinion about veganism that he now avoids eating animals, such as fish, and he will never look back. He stressed that people can get all the protein they need from plants.

“It’s great to see the change that is happening as people embrace a more plant-based diet, but we still have a long way to go. If you want to see your health improve, and you care about the planet, go vegan.”, he said. The English actress Thandiwe Newton told that she wanted to go vegan after working with fellow actor and long-time vegan, Woody Harrelson. She said, “I think it’s good to have a vegan in the mix. A vegan in a position of power.”

She often makes jokes, like, “it hasn’t done anything to my brain. I’m absolutely fine.” Milo has been a vegetarian his whole life. He said, “I was a vegetarian in the womb, I was doing it before it was a trend. My parents have been vegetarian for 40 years. They raised my sisters and me vegetarian, we had a dog, and he was vegetarian.”

He also tweeted Morning Star Farms, asking them to bring back a plant-based food item. He wrote, “I know a couple of million vegetarians (as well as myself) who would be grateful if you did. Lemme know how I can help.” Jenna Dewan revealed that she once watched a documentary about slaughterhouses when she was 10. And she stopped eating meat the next day. The actress said, “The next day I said, ’I’m never eating meat again.’ It just stuck. I feel good about it morally and physically.”

Jenna also said that she feels better with her body when she eats vegetarian. Lizzo stopped eating animal products in 2020 but she was a vegetarian 12 years ago. The singer and rapper experiment with raw veganism and claimed, “Being raw has a lot of internal benefits, those are important to me. It boosts your immune system, it gives your digestive system a break. And it just boosts your energy.” The Big Bang Theory star explained why she became vegan on YouTube. She described how animals are bred to make the most amount of animal food for the least amount of money.

“If we think only of economics as what drives us in food production, we produce economically efficient food. The question is: at what cost?”, she said. Johnny Galecki is known for buying a 300-acre plot of land and he wanted to take advantage of it. However, he is a vegetarian and never wants to keep livestock on the land. Still, he said that something will go wrong if a vegetarian has livestock. The English comedian and actor Russell Brand once told that he was a vegetarian at the age of 14. He said, “And because of like, ‘Oh, what? They do what in factory farms?’ Ya know, like, it was too brutal.”