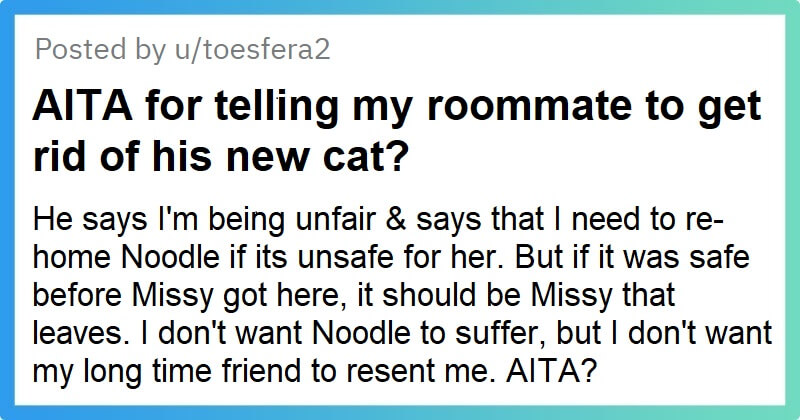 Having a roommate can be a fun and exciting experience, but it comes with many challenges and problems. It’s because you are living with a person who is completely different than you. But no matter how difficult these problems are, they can be resolved through good communication, compromise, and respect. Like a Reddit user (OP) who goes by the name u/toesfera2, OP had an argument with the roommate because of his cat. The two had difficulty resolving their conflict, but finally everything has been dealt. OP shared the story on the subreddit AmItheA**hole. Here’s the whole story, scroll down to read!

The two friends have been friends for ten years and have lived together for a year. They get along well because Brett (the name of OP’s roommate) is a great person. “Brett can be self-absorbed & doesn’t think about consequences beyond how they effect him. But usually if you sit him down and explain to him why he’s in the wrong, he’ll come around,” OP shared.

When they moved in together, OP brought a cat named Noodle. Because their place only allows one cat/dog per unit, OP asked Brett if he was okay with living with Noodle. He didn’t have any pets to bring with him, so he agreed. Everything was nice until Brett took a new cat (Missy) in. Noodle & Missy hated each other. They couldn’t be in the same room and fought constantly. Missy is twice the size of Noodle, so Noodle always gets hurt and finds hiding places. It takes hours to coax her out from hiding. “Noodle refuses to leave my room even to use the litter box. She doesn’t follow me around anymore or come to me when I call her for movie night. I have to coax her out every night so that I can give her the meds she needs. She went from a happy, people-loving kitty to a cat who flinches & runs at the smallest sound. I think her fur might even be falling out,” OP wrote.

OP asked Brett to do something, but his only response was that it wasn’t his problem and that OP needed to do a better job of introducing Noodle to Missy. OP had no choice but to find another solution.

“Finally I brought up that I had paid a large sum of money to allow Noodle to live here & that I paid for Noodle to have a stress-free environment. I told him that if he didn’t figure out something for Missy I would call the apartment office & tell them about her. He says I’m being unfair & says that I need to re-home Noodle if its unsafe for her. But if it was safe BEFORE Missy got here, it should be Missy that leaves.”

OP doesn’t want Noodle to suffer and break this relationship, so OP went on Reddit to ask for advice. OP then updated the post: “I have contacted our landlord and she is going to call my roommate this afternoon. Noodle is safe laying in bed with me and we’re watching YouTube together. The situation is on its way to being resolved.”

“My landlord has spoken to my roommate and has stated she is open to negotiate another pet on the lease since Noodle has been so well-behaved historically. The 3 of us have agreed that Missy will temporarily stay with my roommate’s mother until Missy has a FULL check up and we can properly try to introduce the two cats. Missy is currently out of the apartment and Noodle is currently sunbathing in the window! My roommate has apologized, though I doubt I will be renewing my lease with him on it after this.”

Man’s Pissed Off For Paying $667.39 To Be Told His Dog Has To Take Sh*t, But People Say That’s Normal

25 Cats With Jobs Will Make Your Day Brighter