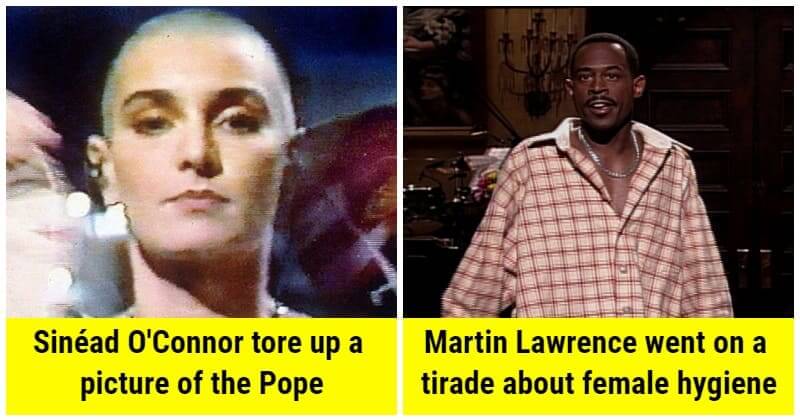 Saturday Night Live is a television institution, having dominated late-night weekend television since its premiere in 1975. Cast members’ success on the show almost guaranteed future stardom, whereas a guest appearance can serve as a watershed moment for actors, comedians, musicians, and other prominent personalities. It’s a shame, therefore, when celebrities are given this valuable opportunity… only for it to backfire on them.

While hundreds of great repertory performers, sparkling hosts, thrilling bands, and legendary singers have graced the SNL stage at Rockefeller Center, only a few have been asked back. These are the prominent celebrities that have been barred from appearing on SNL, as well as some who were rumored to be banned, but in actuality weren’t. There were allegations that Kanye was banned from appearing on Saturday Night Live owing to his feud with Pete Davidson, but a Us Weekly source confirmed that this is not the case. There are currently no plans for Ye to return as a musical guest anytime soon, but he is certainly not invited.

According to Far Out Magazine, System of a Down was banned in 2005 because they yelled “fuck yeah!” without informing producers. Take it with a grain of salt because it appears to be quite mild!

Lorne was apparently not a fan of DJ Muggs smoking a joint on stage when Cyrpress Hill performed in 1993. But they still don’t have any fucks to give.

Sen Dog revealed that he enjoys being banned. To him, it feels “punk rock”.

I mean, we’ve all heard the story. Sinéad appeared on Saturday Night Live to perform and ripped a portrait of Pope Francis in half.

Everyone went crazy, and the following week, Joe Pesci showed up with a taped-up version of the photo. In 2003, Oscar winner Adrien Brody hosted SNL and did an unscripted and insulting imitation of musical guest Sean Paul—while wearing fake dreadlocks. Lorne is said to have blacklisted him as a result.

Martin Lawrence was supposedly removed from Saturday Night Live in 1994 when his opening monologue deviated from what had been made and became spontaneous thoughts about feminine hygiene.

However, he has since stated that he was not banned from SNL, but rather from NBC. As he recently stated to Charlamagne tha God in this interview.

According to sources, Samuel L. Jackson was banned from SNL for swearing on live television during the sketch below. But that is not the case! Apparently, Samuel just ran into Lorne Michaels in an elevator and asked, “Are you ever going to let me back on the show?” “You’re not banned!” said Lorne.

#8 Rage Against the Machine

Lorne Michaels evidently isn’t a fan of people utilizing their SNL platform to protest, there were reports that Rage Against the Machine was barred from performing after they attempted to hang American flags upside down in protest of presenter Steve Forbes. The event reportedly removed the flags and refused to allow the band to perform their second song.

Chevy was a founding member of the Saturday Night Live cast who went on to host the show numerous times. But his behavior behind the scenes was reputedly disgusting, which is what led Lorne to prohibit him. Chevy claimed that SNL “went worse” after he departed, so it sounds like he’s not interested in hosting again.