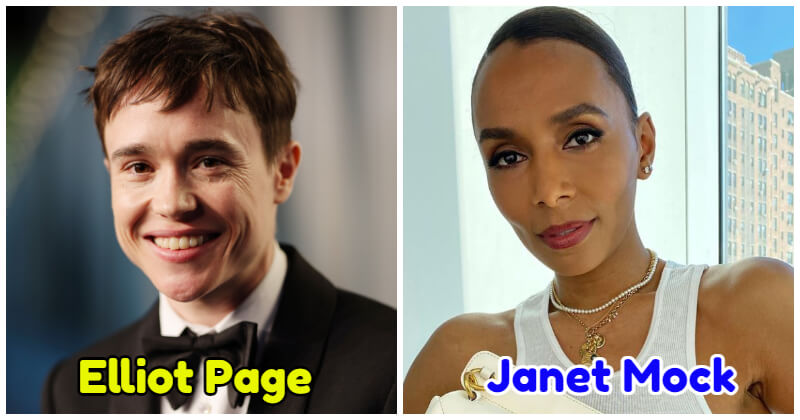 At the forefront of the movement for homosexual rights are transgender people, known as the most ardent advocates for the rights of queer people around the world. Over the years, they are gradually asserting their position with their talents and passions in a variety of disciplines and industries. And it’s the same in the entertainment industry. By excelling in their films and TV shows, these transgender celebrities have broken barriers and helped raise social norms and attitudes about queerness.

Through the struggles and obstacles they faced from their peers and society, these celebrities have become well-known, opening the door for more queer and trans people to follow. Not only are these actresses famous for their notable contributions in the field of film and television, but they have also changed the face of Hollywood. Take the famous transgender rights advocate, TV host, and author Janet Mock as an example. In 2012, Mock launched the #GirlsLikeUs social media movement to support transgender women. She launched the “Never Before” podcast in 2015, worked on the HBO documentary “The Trans List” in 2016, and started the “Beauty Beyond Binaries” column for Allure magazine in 2017. In the same year, Mock released a second book titled “Surpassing Certainty,” which focuses on what she discovered about herself and her life’s purpose in her twenties. Mock made history in 2018 when she wrote and directed LGBTQ+ drama “Pose,” for which she earned Primetime Emmy Award nomination for Outstanding Drama Series.

From Canadian icons like Elliot Page to Emmy winners like Mj Rodriguez, here are 10 trans celebrities whose work shines bright on the screen and beyond. The “Euphoria” actress has been making headlines with her role in the HBO hit series. Although she played Jules – a trans woman in the film, Schafer has also been fighting for trans rights since she was in high school. In 2016, she wrote an essay for Teen Vogue about discriminatory bathroom regulations. When she’s not performing, she works as a model and has walked the catwalk for major brands including Prada, Dior, Coach and more. Although Janet Mock isn’t an actress, she has achieved success in the film and television industries as a director, writer, and producer. She directed “Pose,” “Hollywood,” and “The Politician,” and other films. For her work in the first season of “Pose”, she received a Primetime Emmy Award nomination for Outstanding Drama Series. Last year, she earned two nominations, including one for Outstanding Writing for a Drama Series, and also for “Pose.” In addition to her work in cinema and television, Mock has authored many books and served as an editor for Marie Claire and People. Elliot Page has been nominated for an Academy Award, a Critics’ Choice Award, a Golden Globe, a Screen Actors Guild Award, two BAFTAs, and a Critics’ Choice Award. He has starred in a variety of movies and television episodes like “Hard Candy”, “Smart People”, “Whip It”, “Juno”, and “X-Men: The Last Stand”. He now appears in the third season of “The Umbrella Academy” on Netflix in June. Aside from acting, Page is now working on a book called “Pageboy”, which will be released in 2023. Cox is most well-known for her role as Sophia in “Orange Is the New Black”, for which she made acting history by being the first openly transgender person to get a Primetime Emmy nomination. In 2015, she became the first openly transgender person to win a Daytime Emmy for executive producing “Laverne Cox Presents: The T Word.” She has been a fierce supporter of LGBTQ+ rights and has received several honors for it, including being named one of Time‘s most influential people. Zach Barack debuted his film career with the role in “Spider-Man: Far From Home”. He told Variety that, “being in this movie is so beyond incredibly meaningful and I hope that it means something to other people.” He will then appear in the upcoming television series “Dead End: Paranormal Park.”

Angelica Ross began her acting career with the online series “Her Story” (2016). Following her major roles in the drama series “Pose” (2018–2021) and the anthology horror series “American Horror Story” (2019–present), she has garnered more attention and praise. Besides her acting career, she is the founder and CEO of TransTech Social Enterprises, a firm that helps employ transgender people in the tech industry. Actress Ivory Aquino is most known for her role in the miniseries “When We Rise” about the history of LGBTQ+ rights in the US. However, she made headlines earlier this year when it was revealed that she had been chosen to play the trans heroine Alysia Yeoh in the HBO Max feature film “Batgirl”. With the role, it will be the first time an openly trans character appears in a live-action feature film based on a DC Comics book. She reacted to the news on Instagram, writing: “…kudos to #DC #WarnerBrothers @hbomax for bringing onto the screens of the #DCuniverse a depiction of #trans folks that’s reflective of our existence in the world (or part of it at least!) and for recognizing how much fun we’re all gonna have with Alysia in the house.” Indya Moore is best known for playing the role of Angel Evangelista in the FX television series “Pose”. They also starred in famous films like “Queen & Slim”, and “Aquaman”. They have spoken up about the transphobia and bullying they have experienced from their parents and classmates, but it hasn’t prevented them from inspiring many. They were one of the 50 heroes chosen by Queerty in 2020 as “leading the nation toward equality, acceptance, and dignity for all people” Like her co-star Indya Moore, Mj Rodriguez gained notoriety with her part in “Pose”. She made history by being the first transgender actress to win a Golden Globe when she won the award for Best Actress – Television Series Drama earlier this year. Rodriguez has made appearances on many series such as “The Carrie Diaries” and “Nurse Jackie”. She has also stated that she finds it stimulating to stand up for her community. “We get to be ourselves and live out loud. It’s intimidating because there are so many things that come our way. And with what we have to deal with and the responsibilities that we have, [it] can be a little overwhelming,” she told Metro in 2019. Daniela Vega, a Chilean singer and actress, won praise from reviewers for her performance in the Oscar-winning movie “A Fantastic Woman.” In the same year that Time magazine named her one of the 100 most important people in the world, she became the first transgender person in history to present at the Academy Awards. Vega has also been on television, most notably on “Tales of the City,” and she will soon take the lead in the thriller drama “The Power.”

What 11 Celebrities Passed Away Too Soon Would Look Like Today Via A.I?